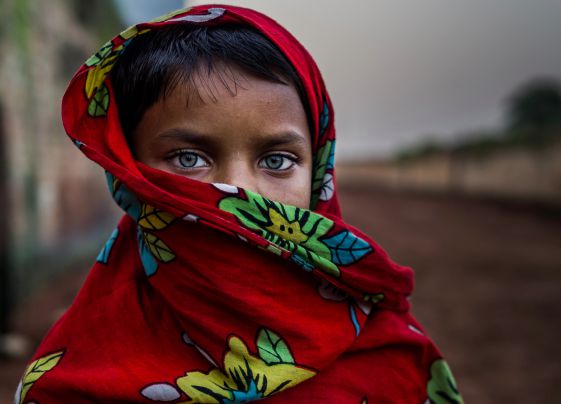 “Today’s children are tomorrow’s citizens!” is a much overused cliché used by our parents and teachers when they want us to do our homework. By quoting such phrases, they think they have done their duty as patriotic citizens of the country. They feel they are upholding the honour of the country with their two bare arms.

But do they ever pause, for even a second, to think about the future of the country, when they push their flawed notions on gender specific behavior down our throats? I seriously doubt this! I always knew we lived in a conservative society. But I liked to believe that we were changing for the better, slowly but steadily.

I believed that one fine day in the not too distant future, we would start treating both genders equally.

I also believed that education was playing an important role in making our kids understand the reason behind such concepts. But then, one fine day, I found myself looking up at the skies in sheer disbelief! I couldn’t help wondering and this was the question that immediately came to my mind. “Are we moving forward or backward as a society?” This realization dawned on me, thanks to my 5 year old neighbour.

It was a Saturday morning. I had decided to get a lot of things done, knowing well that I would end up lazing around and waste the day as usual. Maybe you could even give my laziness a name like ‘occupational hazard!’ I could then justify my laziness and say that this is what happens when you sit in front of a monitor for 16 hours in a day for 5 days in a week.

A knock on the door followed by a loud excited voice broke my chain of thoughts. “Akka!!” said the voice. “Wow! Here comes a fun way of wasting my time!” I thought to myself as I opened the door.

I welcomed a kid who was beaming. He seemed happy to see me. I invited him in and did not realize that a series of seemingly insignificant dialogues with this child would leave me disillusioned. He saw the rangoli near the entrance and asked, “Akka, did you make the rangoli? It’s very nice. I like the design.”

I was flattered. I said. “Yes. Do you want to learn how to make one?” His instant reply was the first shock of my day. “Why would I want to learn it? Am I a girl?” I was taken aback but then said to myself, "Listen! He’s just a kid. You can easily change the way he thinks. He just needs a little talking!"

With the hope of working my magic on him and also doing a good turn for society, I tried to bribe him with a chocolate. I started walking towards the refrigerator to get one.

I took a 5 star out of the refrigerator, closed the door and turned around to find him standing just behind me. He was holding my dupatta in his hand. I was confused and asked him, “Why did you bring my dupatta from the hall?”

He pointed to my sleeveless top and replied, “I can see your upper arms. Cover them with this!” He spoke to me as if this was the most natural thing to say to any woman who had bare upper arms. That I was 15 years older than him did not seem to matter to him.

I decided. Enough was enough. It was time to do some real talking. And it needed to be done now. I took him to the Pooja room and made him sit down in front of all the pictures of the gods and the goddesses. I thought to myself, “This should work! After all, we've been using God to scare kids since time immemorial.” I pointed at the biggest picture, one of Goddess Lakshmi and began my lecture.

"Kiddo! You see Goddess Lakshmi there? She gives us prosperity. Both of us! She doesn't discriminate because I am a girl. She blesses everyone equally. As for the rangoli, it's just an art; anybody can learn it and excel in it. Okay?

Let me give you an example. Your mom cooks at home right? But some of the world's greatest chefs are men. And you or your dad could become a chef too. You just need to have the interest and inclination to learn what you enjoy doing. And look, you are wearing a sleeveless shirt too. Why then should I cover my arms? Everybody is equal. We all have the right to wear what we are comfortable in and feel modest in. Do you understand what I am saying? Will you promise me that you will look at everyone equally from now on?" I asked, with a feeling of accomplishment.

He nodded, looked up at me and said something that ruined my optimism for the rest of my life. "I can see Goddess Lakshmi’s midriff. She should wear her sari properly".

My mouth fell open in disbelief. How could a five year old be so prejudiced and so biased?  Such was his unshakable opinion, that the big talk I had just finished giving him had absolutely zero effect on him.

I became angry because I realized that I was helpless! I could do nothing to change even a kid's opinion. Damn, he wasn't even supposed to have an opinion about any of this!!!

It was at that moment that I realized that we were flawed as a society.

If this is what middle-class, literate parents taught their children, I could only imagine the plight of the people who lived below the poverty line. These people did not have the privilege of basic education, were highly impressionable and easily influenced by the stereotypical saas-bahu serials that were telecast on TV. I wondered what such parents would teach their kids!

And then I thought, maybe I was wrong all this time. Maybe I shouldn't hope for a better future.

Maybe all the articles on the Internet about "teaching your sons to behave and telling your daughters to be as they like" was all a facade!

Maybe we are actually moving backward. This is hardly surprising. Our government gives the poor people free television sets and expects us to pay in lacs for quality education!”

Let’s PLEASE change the scenario one child at a time.

Share this story if you believe that real education really begins at home.