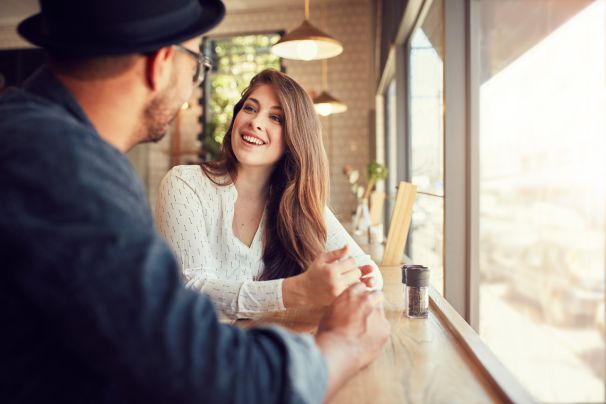 Yash and I began talking on Facebook for a formal reason. To make things awkward, he was my (now ex-) boyfriend’s best friend. So, when we spoke, I was expected to be a little formal and stay within my limits when it came to texting him. Of course, within a little while, the texting on Facebook suddenly grew into phone calls.

I felt connected to him; much more than I have with anyone else till now. We weren’t in love, not yet, we barely knew each other… but the time we spent with other was definitely lovely.

He was easy to get along with and within a few days, we both realized that our thoughts and perspectives were actually in sync. He seemed to be a very level-headed, calm and collected person. He knew what he wanted and was very clear about what he didn’t want.

I remember thinking how similar we both were. What I liked most about him actually was that he liked me, just the way I was. From the very beginning, I didn’t feel the need to pretend to be something or someone else. Even though this relationship was supposed to a formal one, we both felt something was happening here and we quickly became good friends.

We were very open in our talks, about what we could do and couldn’t do. How we would live and what we could expect from the other, and more importantly, the others around us.

He respected my opinions and I loved him for this.

Things were going so well for us, and I was happy.

About three months later, I realized that I was falling in love with him. And it was a fabulous feeling. He was a wonderful guy and I loved his simplicity. We would talk for hours every night and my days began to feel incomplete if I couldn’t speak to him.

On one of our many long conversations, he asked me to listen to a song from the movie, Rockstar. I don’t know why he asked me to listen to it- it was in the middle of August, it was raining and I was on the ground floor of my hostel room. The network wasn’t good, so I ran upstairs to the terrace to listen to it. As I waited for the song to buffer, I knew I was going to fall sick, I was getting drenched in the rain. But I didn’t care about this because with each and every drop that was touching my body, I knew I was just falling in love with him, more and more.

A few days later, he was partying and drinking with his brothers and he told me not to wait for him. So I slept early that night. I don’t know what that drink did to him, but he sent me a message, “Tujh me dhadkan mili is dil ko.” I woke up with the widest smile on my face.

I called him and he was extremely hungover, but he still sounded so cute. I blurted out, “I love you!” He laughed and tells me, “This is the first time that you’ve said this, you know? I love you too by the way.” I could hear the smile in his voice.

We both laughed. And I couldn’t help but melt some more.

Days went by, it was time for me to come-back to the pavilion for my holidays. I told him that the details of my train and what time I would be reaching the station. Little did I know, that he would be standing there, waiting for me.

He was wearing a yellow t-shirt and looking at his glittering eyes, my heart couldn’t help but skip a beat. Of course, I couldn’t run up and hug him, because my mom was waiting for me. All I could do was smile at him as I hugged my mom tight.

When we got in the car, I saw him in the rearview mirror, smiling. I felt so overwhelmed, I remember thinking that I just couldn’t stop thinking about him, even if I wanted to.

That very night, he called me and asked me to come to my balcony. And to my surprise, he was there with his brother, just standing there, waiting to look at me. I remember thinking how hard I had fallen for this boy. I knew that I had to talk about our relationship on a serious note. I think the biggest mistake I made was not to confess all of this to him. The next day, I went to the market with mom and when I was shopping inside, I got a text from him, it said, “Look around.”

And oh my god. There he was! Eating paani puri and smiling at me. I couldn’t stop laughing. This had to be the sweetest gesture ever. A random friend of mine was with him and kept asking him why they were standing here, all he did was point at me and say, “For her.” I just wanted to run to him and hug him, without thinking about anyone or anything! He made me so happy, with the smallest things that he did.

I was crazy about him and these things he did just made me feel like I was the only girl for him in the world.

Finally, a few days later, we decided to meet at a food court in our town. I almost passed out at the thought of what I should wear when I meet the boy of my dreams for the first time.

After nearly an hour of hyperventilating, I chose a white and black top with jeans. He called me and told me to reach by 2:30. My mind was racing and I couldn’t find a way to calm myself down.

When I finally reached, I saw him standing there, wearing a crisp navy blue shirt with jeans, accompanied with Ray-Ban sunglasses.
Damn. I didn’t know how I controlled myself from fainting.

That had to be one of my best afternoons, we talked, and laughed and talked some more and laughed some more, of course, in all of this I was constantly blushing as he kept stealing glances at me. This had to have been the best day of my life.

Share this story, because there are some love stories that exist to make us smile.