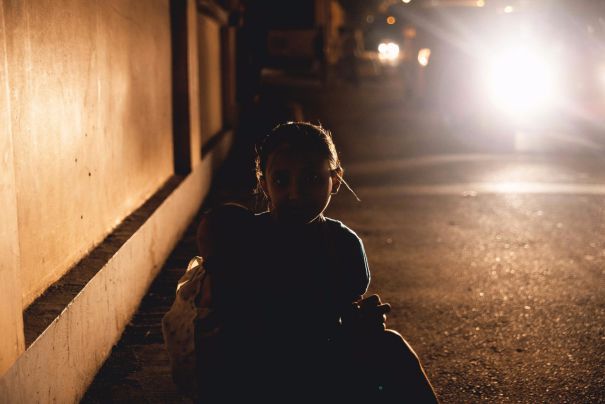 "You ain't eating much. Don't you like it?"
"I like it. I just don't have an appetite."
"Why?" "I haven't seen this much food in last few months."
"You didn't have food at home?"
"We had. But little, I guess. My mother used to feed us all. Though I never saw her and father having a nibble."
"You didn't bring food for them?"
"We were prohibited to step out of the house."
"Why's that?"
"The bombs could come down anytime. My father scared the bombs might take his children."
"Did the bomb fall?"
"On my house per say. I never saw my siblings and my father after that."

"I don't know. She was there with me on the boat and in the camps they called 'refugee camps' too for some days."

"Yes. 2-3 such men would come every night in our camp, throw me out and take mother inside. Then, I would only hear my mother's cries and sounds of beating. First I used to wait outside only to see those men coming out of the camp, zipping up their chains, tucking their shirts in, setting their tousled hair and laughing. But later, I would fall asleep and wake up in mother's arms while she sobbed for reasons I didn't know."

"What happened to your mother then?"
"They said she'd got a better place to be in."
"Who said?"
"Those armed men in Khaki. I was angry with her for leaving me there alone."
"Aren't you angry with her now?"

"Not now. After I came here and found you, I forgave her. She might have also found a family."

"Ah, it was nothing. I just had to stay still and not move. Rest he would do himself."

"No. No, my love. I've got no reason to be angry at you. I'm just dejected at the idea of angels having to share this world with demons."

"What are they?" "Angels and demons?"
"Yes. Them."
"Angels are good people like you. Demons are bad ones like that official."
"But the official was good. He sent me here to you."
"Only if I could tell you, now!"
"He helped me survive. Didn't he?"

"You survived because you're brave. You're a survivor of the worst times because you made it through."

"Okay."
"Tell me more about your journey on boat and in camps."
"My mother had managed to pack some bread loaves for me before we sailed. But there were other children on the boat who cried because of hunger. So, I shared my bread with them. But that couldn't help much."
"Why?"
"Many died midway before even reaching the island."

"Their bodies would have been carried to the island, no?"
"No. They threw their bodies in the sea. They said the dead were heavier than the alive ones and the boat might sink because of their weights."
"Oh!"
"Yes."

"Okay. Listen to me. Now, you're safe with me. You don't have to go through all that again. You don't have to do anything you'd to do in the past. I'll get you the citizenship of this country. You'll be a free man soon."
"Citizenship?"
"It's a legal status of a person as a member of the country."
"You'll make me a member of your country. But I was born in another country. What about that?"

LIFE IN THE TIMES OF CORONA
POEM
HOW'S THE JOSH
BAKKAR. CHAI. SUTTA
JUST IN
The Golden Bird