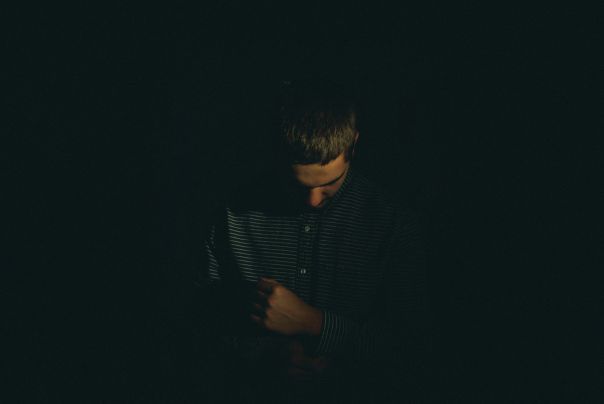 He was sitting on the bed, staring at the empty wall ahead of him.

“Why can’t hospital walls be colorful?” she had once asked him, but at the time, he had no reply for her.

It would be better, to sit in a room full of colours than one without, he thought. He switched on his phone, only to find it flooded with ‘Get Well Soon’ messages; those depressed him. Maybe switching off his phone wasn’t such a good idea.

The pile of books ahead of him stared at him, almost as if begging him to finish just one. He took hold of one, Love In The Time Of Cholera, this was actually one of his all-time favourites.

A knock on his door made him put the book aside. He saw her standing there, with a smile on her face and chocolate in her hands. It didn’t take even a second, for his face to mimic hers. She didn’t need an invitation and climbed onto his bed, her chocolate fingerprints staining his white sheets.
“You’re not going to share your chocolate again?” he teased her.
“I want to hear the poem you wrote last night, recite it, fast!” she said, bossing over him.
He handed her a piece of paper, she grabbed it but quickly made a face, “Hey! It’s incomplete!” there was an annoyance in her voice.
“What?” he asked.
“The poem, it has no end. It should have an end!” she began reading from the paper loudly,

“She walked down the road, not knowing where to go.

Life had a plan, a destination for her surprise,

Throwing caution to the wind, believing her fate,

She walked with blindfolded eyes,

Oh, she is insane.

Her life was little, but her heart wanted to live…”

She stopped, abruptly. “See, it’s incomplete!” she raised her eyebrows at him and waved the paper in his face, “Finish it!”

“I can’t seem to finish it…” he started, “It’s difficult to write after that last line…”

She laughed, “Oh! Mr. Writer can’t think of what to write? Now, this is surprising!” He laughed with her.

“You know, that last line of yours, it could just be the answer to my question…” she whispered softly.

It was almost as if a dark cloud covered the little bit of sunshine they had. He stopped smiling instantly and told her to get off of his bed and wash her hands. She got off, a small smile on her face and came and sat beside him again. In the silence that was caught between them, she glanced over at the books on his table.

“Hey, why do you only always read love stories?” she teased. When he didn’t reply, she continued, “You know, I’ve never had a boyfriend. I always thought if I had more time… that I would find a nice guy…”
He interrupted her, “Who am I then?”
“You’re my sweetheart!” She giggled and kissed him on his cheek.
“Shubham, you know I love you right?” she asked him. “Yes, of course, my love, I know that,” he said, his hands gently playing with her hair. “Then why can’t you accept my request?”

This time, she looked straight into his eyes. He went numb.

“Why do you want to die?” Now she was quiet, and turned her eyes away from his; he continued, “What am I going to do then? When you’re not here… Who will tease me by eating all of the chocolate in the world in front of me?”

Tears began streaming down his face. She grabbed his hand and placed it on his heart, she whispered, “I’m always going to be here. You can talk to me whenever you want to. And you know, I don’t mean this as a stupid metaphor, but you’ll always have my heart…” She went on, “You need the transplant, and your donor is sitting right in front of you. I don’t have much time, and yet, instead of taking your beloved's heart you are refusing it, to my face.”
He couldn’t say a word more, and he couldn’t deny the truth in what she had just said. He pulled her close and held onto her, tight.

A few months later, he sat there, staring at the blank walls in the room where he once sat, holding Mili.

He smiled as he started at the colourless walls in front of him, he placed his hand, on his chest, and felt her beating heart and decided, it was time to paint the room.

If the story could be this devastatingly beautiful, imagine how the inspiration was. Share this story because love is a wonder.