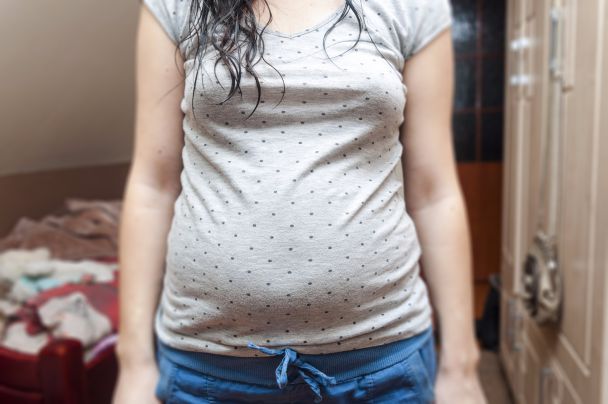 And then, there was Christabel—Bella—my cousin—a lonely sixteen-year-old girl—pretty, smart, and had a lot of good friends who loved her, but hadn't made a boyfriend yet. Well, not a real boyfriend anyway, since she couldn't count Ovie Osemwegie, who made out with her five years ago at a school party, but never really spoke to her again after it happened.

It was October 1, 2013. For many Nigerians, this day is a time of dressing up in 'green and white' and wandering about the neighborhood, waving the Nigerian flag with an unwavering patriotic spirit. For most, this date is a simple one, known as 'Independence Day.' For Bella, it was the day her daughter died.

Let's rewind a few months. February 5, 2013. It was a typical school day for Bella. She was in the school gym playing volleyball. Bella was distracted by the fact that she had no one to buy her flowers for Valentine's Day in a few days, and this meant a lot to her — because all her friends did. Coach was yelling, telling her to keep her head in the game, and try harder. She did, and everything went sort of okay, until the ball came at her. She thoughtlessly smacked at the ball, and it arced high in the air, well over the net, and cascaded down upon the head of Joe Alugo — and he fell. The ball rebounded and rolled away, and all eyes went on her. She blushed and ducked her head in embarrassment.

"I hate the gym," she thought to herself.

"What was that? What's wrong with you?" yelled Coach. He stormed over to Joe, glaring at Bella, and then looked down at Joe. "Are you okay, boy?" he asked. Joe got up slowly, rubbing his head where the ball had hit him. "I'm fine," he mumbled, wincing a little. Everybody got back to the game, snickering and grinning maliciously at her. "Next time, try setting the ball, girl" said Coach, rolling his eyes, and blowing the final whistle. They all packed up the volleyballs, and headed towards the shower. Bella trudged away from everyone, feeling really awful, then she heard someone come up next to her.

"Hey" he said, still rubbing his head a little. She turned around and saw him. She ducked her head again in embarrassment. "Hi" she replied cautiously. "Coach was kind of an a****le to you," he said, laughing a little. "Maybe if he tried actually teaching you, instead of shouting, you'd be a bit better at volleyball." She looked up at him, smiling. "Yeah" she said, "that'd be a nice change. But are you alright?"

"Don't worry about it, I'm fine. Coach shouldn't have yelled at you like that. I've gotten hurt way more from football." Bella nodded, relieved.

"So, I was thinking" he said. "The Valentine's Day is a few days away. I want to buy you a flower. My way of saying sorry for the way Coach scolded you. Are you okay with that?" Joe asked. "Um, yeah, I'm okay with that." she accepted without hesitation, but acting like she wasn't desperate at all. "Cool" he said, sounding very genuine as he grinned even wider than normal. "I'll see you around, I guess." "Yeah, I'll see you," Bella replied, flashing Joe a wide smile as he turned towards the boy's bathroom.

Joe and Bella talked and made fun of Coach the rest of the week. He texted her every night. Things didn't seem like they could get any better — well, that is, until they did.

The rest of the week was total bliss. "I just want to spend some time alone with you," Joe explained to Bella over the phone. "No one is home," Bella quickly invited Joe over. He was over in about fifteen minutes. He gazed into her eyes. She could remember them perfectly — they were deep black in colour. They were clear and beautiful, more like the ocean or the twilight sky — and they shined just like the stars. Before she knew it, he was kissing her.

"Anytime I am with you, I have a great time. You are absolutely amazing," he breathed into her ear. Bella didn't have time to respond to his words because his lips were soon on hers again. I don't need to go to great detail — so I will let your imaginations run wild. Let's just say they didn't just kiss. A month later, after they did the deed a few more times, a little pink plus sign changed Bella's life forever.

When she told Joe she was pregnant, he freaked out. He stopped texting, and he stopped calling. He avoided her in school, while Bella cried for days. She didn't want an abortion. She wanted to keep the baby. She knew her parents would be heartbroken if she told them — after all, she was only sixteen

How could their baby girl be pregnant? Bella finally cornered Joe after gym one day, about a week after she'd told him. "Joe, listen to me! We need to talk about this! I'm serious." "Talk about what?" he demanded coldly. "Just get rid of that thing, whatever it is, just get rid of it. Problem solved! Jesus!" Bella felt like she'd been slapped on both chins. "Get rid of what? Are you serious? I can't do that, Joe!" "Why not?" he demanded again coldly. "Because it's my baby! Our baby! I just can't kill it!" she yelled angrily. Luckily, the gym was empty and everyone was in the bathroom. Bella started sobbing. He looked away, passive and cold.

"Well, don't expect me to stick around. I'm seventeen. I don't need a child when I'm still a child myself. You stupid girl!" Joe screamed, before turning away and bursting into the bathroom. Bella stayed there, on the gym floor, crying for the rest of the school day.

Bella's parents were, indeed, heartbroken. Her mother held her hand as they both cried, and she declared that she would always be there for Bella. Her father, on the other hand, thought differently. He, like Joe, thought she was a stupid girl for wanting to keep the baby. Later that night she heard her parents fighting about what to do with her.

School became torture for Bella, after the first few months. Everyone found out since it was impossible to hide. They called her a w***e, a s**t, and too many other words you cannot say in front of your parents. About seven months and ten days in, Bella felt a horrible abominable pain when she was in a History class. It was a twisting, gut-wrenching ache. She grabbed her stomach, crying out for help. The teacher stepped in and called an ambulance, while her classmates looked at her in disgust, thinking she was in labor.

The teacher, who is a mother herself, knew it was too early, and was concerned. At the hospital, all Bella could think about doing was begging God that her daughter was still okay.

She just got a checkup a week ago, and got a clean bill of health for both her and her baby. She couldn't bear to think anything had gone wrong in the last week. But as it turns out, God had other plans for Bella. She held her baby — her beautiful baby girl in her arms, sobbing while her parents stood in the corner, crying too, and holding each other.

Baby Sandra was an angel, even in death, and her tiny fingers lay limply in Bella's hand. Baby Sandra never cried — she was already too far gone to cry. She just laid there, as though she was asleep, while Bella died inside. Bella's daughter died on 'Independence Day'.

And I suppose it made sense for someone to die on Independence Day. It seems almost fitting, in an awful sort of way, since independence is freedom —freedom from the prejudice, betrayal, selfishness, and wickedness of humanity. Bella died with her daughter that same day — as she never remained the same after it happened. What's worse is that the kids at school stopped mocking her. Now they all felt sorry for her. They pitied the pregnant teenager who lost her baby. Teachers stopped expecting great things from Bella. And Joe looked just as dead as Bella did, because as much as he said he didn't want to be involved, he still lost his daughter that day.

This is what hurt Bella the most. She wanted Joe to care, but he didn't, and the time he did, he blamed her. She could see those beautiful, unforgiving eyes of his. She could feel the burning rage and the burning guilt that enveloped him, as he gazed at her once again.

Nick Nwaogu is a Nigerian writer, blogger, physicist, and computer programmer. Before starting his writing career, he’d already made a name, locally and internationally, as a seasoned Internet entrepreneur and tech savvy. At 19, he co-founded an exclusive social network for students of his university, which later expanded and grew to over one-million registered members in less than three years. He was the keynote speaker at the 2012 IT Leaders West Africa Summit, where he gave an exceptional thirty-minute lecture on the role of social media and mobile in developing nations. His success story has been told by Vanguard, TheGuardian, African Business Review, Yahoo! News, and TechCrunch, just to mention a few.