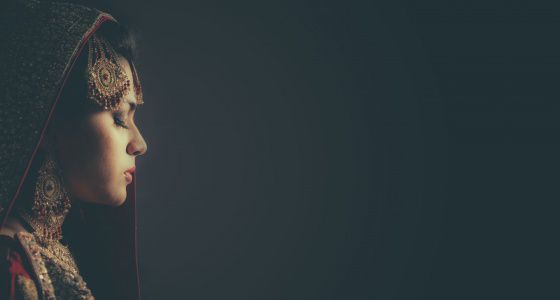 We met my brother-in-law Ronny and his wife Veena at Wang’s Chinese Buffet. He introduced us to the owner and us to the owner, who brought out the beers and told us they were on the house.

It was easy to see why Ronny would want to bring us here; the same reason he'd gotten a dog and lived in Orlando and went on vacations to Rio and all the rest. For the predictable lavishness of it, the attention and the ease.

“Tell that sister of yours that if she doesn’t get married real soon, she’s gonna end up in the gutter like my wife's cousin.”

Coming to Wang's where they all knew him must’ve made him feel normal, especially after he’d finished prophesying doom on everyone else. He told us how Veena’s cousin had a face like a crater and no one would want to touch her with a ten foot pole.

"She was butt ugly.” He laughed, more like guffawed. "Everyone wants to marry a pretty girl, right? Or at least someone with a face."

Ronny and Veena had met in college, when she was a young girl with a round face and long hair, exuding 'purity'. At least that’s how she looked in the black and white photograph in the album that was on their coffee table. I'd pieced it all together over the years and I’d heard Ronny speak lovingly of her that way, his prized possession.

She was extremely fair skinned, his mountain girl. "Just like white," he'd joke. I could tell he was still proud of the acquisition, though she had aged and lost her girlishness. They'd been at school together in Pondicherry and from what I'd gathered, Ronny was obsessed with a certain quality in a woman, purity of heart. That was the number one quality for him in a wife.

He was smitten by her youth and shyness and natural beauty. I also think that she was easily moulded, though she could put up a fairly good front, becoming weakly contrarian in front of others, that is, of an opinion, but then resigning to the truth of the matter, that Ronny was right after all.

I'd seen it happen many times right before my eyes. Veena was both easily persuaded and dissuaded, and that also was part of Ronny's definition.

But there were conflicting reports. Someone had said, either Ronny or Dev or maybe my mother-in-law when she was alive, said that Veena had been a real live wire back in medical school, campaigning for rural women's rights and education. But what had begun with youthful fervour had ended in failure. Ronny had put an end to her activism when he asked her to marry him.

“You didn’t have the brains for that,” he’d tell her.

Or rather, I could imagine him saying that. I have no proof, and to tell you the truth, it's all in the past. She was who she was and she was right in front of me, twittering around her kitchen, disqualified from any real debate.

Her movements were like that of a bird, tottering around, reacting to all the quibbles and taunts that came her way. And yet by the same merits of her birdlike attention span, she was forgetful enough that she never harboured any resentment, the perfect life partner for someone like him.

“You’re always saying something mean about my family,” said Veena, letting the dogs in. He told me that my sister needed to marry soon or else she’d turn out to be like Veena’s ‘loser’ cousin. I wasn't sure how to respond.

“See, she agrees with me.” He announced, he had to get ready for work and got up to go to his bedroom at the end of the long hallway, traversing the great room, past the foyer, the staircase, and his office. Veena followed after him.

“Ronny, what did you want for breakfast?”

There is something about a hard truth which cannot be denied.

Veena clung to him. And with the passing of years, she'd done so incrementally. At weddings and events and trips to places where there would be people vying for his attention, she clung to him, and never let him out of her sight. And Ronny, for his part, accepted it. And so the passage of years and their ineluctable cementing.

After Pondicherry, she turned her energies from youthful activism to that which stirred her husband: his ambition. She stood behind him at every step, though he was deaf to any counsel. He prospered, his cardiology practice blossoming from two to forty physicians, all of whom he hired as underlings and never made partner. He was comfortable with the turnover, excelling at the business end. He branched out into real estate, became the owner of several commercial properties, then into politics, contributing thousands to the DNC, and finally, into the real deal, becoming the head of his own HMO.

That evening we all stayed up and watched a Shah Rukh Khan film. We were sitting in the living room, which doubled as media room, complete with six black leather recliners and a mix of strange artwork.

“So this pimply faced cousin… she ended up losing her job, her parents died, leaving her with nothing and she became a homeless beggar begging for food. She slept on the street outside a temple, and she eventually got TB and died right there on the temple steps. All shrivelled up and emaciated. Dead. With flies… That’s what’s going to happen to your sister if she doesn’t get married soon.”

Veena decided she had it and switched the lights back on. With disappointment in her voice, she said she didn’t want to watch the movie, and left.

“Everyone gets married," he said, winding up. “What’s she going to do with her life? Live with your parents until she’s fifty?”

“I don’t know,” I said. I wondered what would happen if Ronny got a chronic disease that marked up his face so he couldn’t show it anymore in public. I turned to look at the wet bar behind him. It was crowded with liquor bottles and whiskey tumblers.

Having had enough for the day, I told him I was turning in and asked them to go ahead.

“You want to know something?” Ronny called out before I was out of earshot. “Marriages are made in heaven.”

In that moment, I wanted to slap him but I didn't. If his wife is fine with how he is, it was not my place to intrude in their 'happy married life'. I did think though, if this is heaven, what'll hell look like for Veena?

As a feminist, it can be very frustrating to come across such people or couples. What's more frustrating is when it's obvious that the woman in question is fine with the sexism and that fact is enough to shut you up. Please share this story with every male chauvinist you know.

Rita Malik is a writer based in the U.S. She is currently at work on a novel based in modern day India