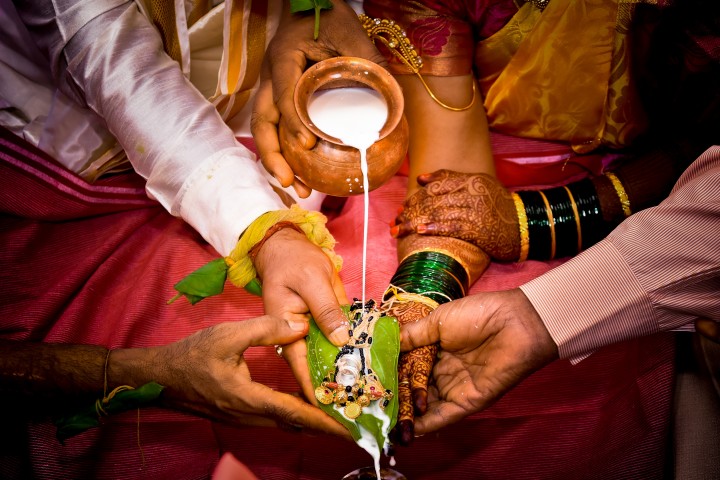 *For representational purpose only.
This is my #IndianWeddingTale.
A love marriage involving two middle class families, where a Maharashtrian Boy and a Marwadi Girl, get married in a 5-Star Hotel, making it a grand event for both the families.
However, regardless of the venue or the affluence or the attendees being highly educated, most Indian families give in to traditional rituals and practices coming down from generations and ages.
Hence as expected, after the formal ceremony was completed by the Panditji, and invitees having met the couple during the "reception", dinner was laid down for the couple at the table, along with the groom's close family members.

Again as expected, at first came the bride's grandparents, followed by the parents, and other senior members of the family, walking up to every single person sitting at the dinner table, offering various dishes and courses prepared for the special meal.
Since we weren't used to this kind of a ritual which involves senior members of the bride's family serving food for us, my brother and I threatened to leave the table if this were to continue, instead of the waiters serving food as per our requirement.

This turned out to be a big escalation, sending signals that someone from the groom's family members is dissatisfied with the service offered by the bride's family, which finally ended up with apologies from both sides, as none actually meant to offend anyone's feelings or sentiments.

It was also brought out that the bride's family members were just ensuring that rituals & traditions continue to be followed, for the satisfaction of the senior members, who in fact were happily serving the groom's family.
With all the misunderstandings cleared, and clarifications along with detailed explanations given, both the families were laughing away at all that happened so quickly in the past hour, to end the formalities of a wedding event, and begin the life's journey ahead with additional members and extended families.
What is an Indian Wedding without a misunderstanding anyway, isn't it?

Share this to spread some joy and share your own #IndianWeddingTale with us as well. For a full fledged version of Indian wedding fun, pick up your copy of My Best Friend's Son's Wedding!