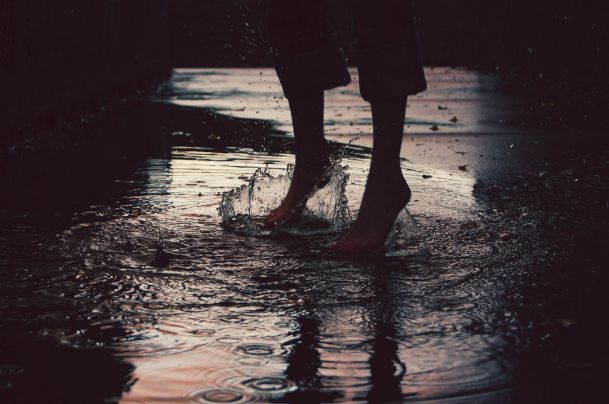 A cyclone hit us but it brought a hailstorm along with it too.

The continuous pouring made it almost impossible for the driver to drive past the speed limit. Not a single vehicle could be seen and not a single sound except that of the union of rain and wind God could be heard. The lightning was, in fact, a relief for Mrs. Karmakar as it allowed her to check if the toddler is paler than the last time she saw her.

Buried under almost a dozen baby blankets to keep her warm, one could easily mistake her for a 5-year-old. The heap of blankets making her look double her size. However, if you are patient enough to wait for the lightning, you will see a face smaller than your palm. All white, as if blood has been purposefully sucked out of it. But here and there, when Mrs. Kamarkar's own heartbeat refused to slow down, you could see a slight movement in the toddler's fingers.

Finally, the journey ended. Mr. Kamarkar got out and rushed to the other side of the car to save the wife and children from the rain. Mrs. Kamarkar needed the doctor more than the umbrella. The child already dehydrated from constant vomiting and diarrhoea.

"You should have brought her sooner." said the doctor in a half accusing voice. A tone that said if anything happens, the people who brought her late would be responsible.

"What do you mean we brought her late? Is it too late doctor?" Mrs Kamarkar breaking into tears.

"We are doing everything that is possible to save her"

The rain stopped the following morning. Around 7am Mrs. Kamarkar's child was declared dead. She wasn't the only one who died that day.

Shakuntala used to sell newspapers on the road to earn money. While her father, a polio patient, used to beg to earn money. She had no mother. In the evening she used to help her elder brother to build a make-shift home by the side of the highway near the hospital. That night when the cyclone hit, their home was blown away. And one of the iron rods that they used to keep their home in its upright position, penetrated Shakuntala's legs, through the bones.

Her father couldn't and her brother wouldn't have dared to go to that fancy hospital. Shakuntala died within a week when the infection spread through her entire leg. As if death personified itself. She often used to cry and ask her father to help. The polio patient, in turn, prayed to the God of Death to end her daughter's plight. Poor little Shakuntala. Little indeed she was. A brave 6-year-old little beggar.

Would death have to be the only equalizer? Share this story so that people may treat each other more kindly.