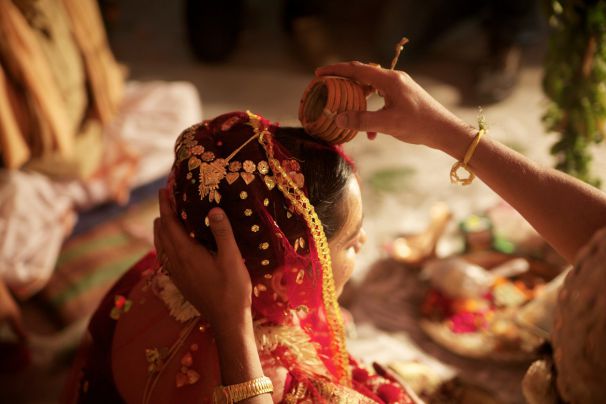 It was the first morning after my marriage. I had slept late due to all the late night rituals. So it was difficult for me to wake up early but I could hear someone knocking on my room door. As I opened my swollen eyes, I realised this was not the house where I grew up, the house where my parents pampered me, my brothers adored me, this was not that house. Then I remembered the lavish wedding ceremony that had taken place yesterday, the Saat pheras, the rituals, bidai and now here I was in my new home.

I could see a blue wardrobe in front of my bed, it had a small picture of Madhuri Dixit stuck on it. Is my husband a fan of her? I wondered. As I looked away I saw a dressing table on the right corner of the room, I quickly stretched myself and got out of the bed. My eyes began searching for a comb. This was my time, my moment and I had to look beautiful and fresh like a newly wed television character from Star plus serials. I combed my hair and then smiled at the mirror. The knock was louder this time.

As I rushed to open the door, I realised my bindi was missing. I searched for it on the bed but couldn't find it. So I had to open the door without a bindi. It was my mother-in-law, she gave me a harsh yet sad look, "Come downstairs at once" said my mother in law.

I quickly opened my suitcase, got my comb, bindis and stood in front of the mirror admiring myself. I looked different, beautiful and happy. I was humming the "sajna hai mujhe, sajna ke liye" song while draping my sari and then I headed downstairs.

The scene in the living room was very different from what I had expected, it was quieter, the room was full of people of all ages. Few faces that I saw around me looked worried, sad, scared.

My eyes searched for him but I couldn't see him. I expected some fun comments, compliments, to be made but nothing happened, no one spoke to me.

As I stood in a corner of the room, Mummyji shouted at me from the other side of the room, "Do you know where Pardip has gone? Did he inform you about anything? My husband's name was Pradeep. I nodded in no and softly said, "No". There were whispers across the room. I could hear someone saying that Pradeep was missing since last night.

I was not aware of the happenings, I was still an outsider. Where was Pradeep? What was the matter? Was everything okay at my place? My mind was full of numerous questions. The time was 8.06am when the home landline rang. Trrrrrringggg Trrrrreinnngg! Everyone moved their heads to look at the maroon coloured telephone. My father-in-law answered the call, I sneaked a glance at everyone in the room. They all looked worried, eager.

"What??? No!! It can't be him. We are not coming. I am sure it's not my son," said my father-in-law and he banged the telephone. There was pin drop silence in the room, I could almost hear everyone's heartbeats.

After a few seconds my father-in-law informed us that a body was found on the railway tracks and they wanted us to come and see it. It seems they thought it was my husband, Mr. Pradeep Damodar Hatangdi.

I felt alone, lost in a desert or maybe island. I wanted to shout, yell, cry.

(Read the second part of the story here: This Is How I Became A Widow On The First Morning Of My Marriage)

If you want the second part to come soon, share this story.