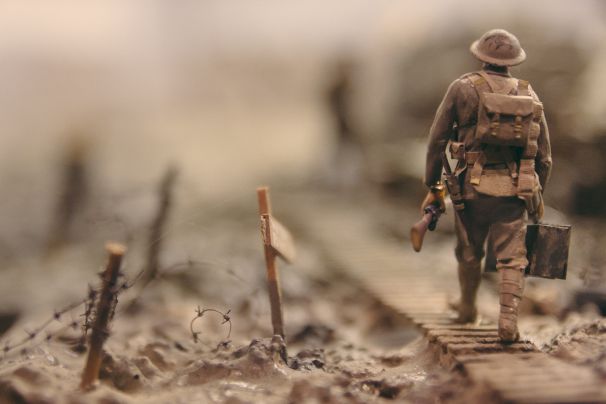 “Loving him is the easiest thing I’ve ever done, but there was a point of time when I actually didn’t know, whether to hold on to him or just let it go”

Loving a man in uniform.

There’s a point of time in each one of our lives when we fall for someone so hard that we make them our lives. The cupid of love did not spare me either. And I fell for this man, not an ordinary one. But a man in uniform. A man who’s serving in the Indian Army.

It might sound fascinating. Army personnel – dealing with ammunition, bullets, projectiles, howitzer, mortars. Don't these sound thrilling? But actuality is way different than these.

I’m just in my 20s, pursuing my degree in journalism, hailing from a defence background. Falling in love wasn’t difficult. We started our romance casually and became serious for each other in no time. We both didn’t want a lovey-dovey, nutty about each other or a typical nonu-shonu (that’s what he says) kind of relationship. So it all started with mature love. A kind of relationship which was more about loving, not being loved. I used to understand his work. He used to understand my emotions. Different work hours. Different states. Different situations. Still, we managed to be together.

Honestly, it sucks! It feels pathetic to wait for the whole day, for him to text for once or for just a call. It feels very low. And then suddenly the phone rings at midnight. Finally, he calls.

“Just came back to the room, how’re you? How are your studies going on? Bebo can I sleep, have to get up early in the morning. Sorry…Love You!” His sleepy voice has that magic, that even if I would be boiling in anger, waiting for him with so many complaints, his I LOVE YOU in romantic intonation made me fall for him all over again.

He’s one of the quietest people I’ve ever seen. His typical ‘Aur Batao’ sometimes used to irritate me. But he always used to make me smile by saying ‘Meri Kamoshiyon ko nahi samajhti tum….’ It’s a myth that Faujis are romantic, at least not in my case. His love always lingered in his silence.

We had got into knock-outs, then making up later the following day only to have the same fight again and again. We both knew that no matter how bad we fought, how many sacrifices we had to make, it’s going to be worth it in the end.

But gradually things changed. Suddenly one day he asked me to maintain distance from him. I didn’t know what had happened. It felt like my whole world came crashing down.

I knew it was his work. His commitment to the nation. And he didn’t want me to suffer because of him. Maybe he knew he won’t be able to give me time. He didn’t want me to feel bad. That’s why he simply asked me to maintain distance.

I don’t know what I should call this. His love or his prudence. His self-restraints were breaking me down. We hardly talked after that. He wanted me to be with him but he couldn’t put any effort. I used to cry myself to sleep. But he never came to wipe off the tears. I felt like maybe he didn’t love me anymore. Maybe I was not good enough.

I still remember before we started our relationship, I told him one thing that there might come a time when we won’t be able to talk (because of his work), things will fester, and if our relationship sustains that phase, only then is it, true love.

Now I was understanding why people fell out of love nowadays. Maybe they’re not prepared for the sacrifices, for the compromises, for the unconditional love. People just quit. People want everything easy. A single hurdle and everything comes to dust. People do not understand that love is not about feeling like a ton of work and angst. They are not ready to hold on to someone. Maybe letting it go is too easy nowadays.

Love is about someone who just doesn’t read your words but understands your deepest silences. The silence has a heartbeat. You need to feel that. It’s about being with someone whom you may not see for months, maybe don't talk to for weeks but still, the trust doesn't die. Distance gives us reasons to love harder.

It’s about being so madly in love with someone that you can travel for 4 hours just to see him at the airport for 5 mins, even if you know that he’s the guy who has been hurting you. It’s about being with someone without any expectations, praying every day for his well-being, hoping things will be fine. There’s a lingo in FAUJ - ‘This too shall pass’. It’s not about ‘falling in love’. It isn’t something you fall for; it’s something you rise for.

We are still together. I believe that despite all his protestation, love will seep into his depths and hue his world with colors. If today is not the day, I believe that someday, things will be better between us.

Nowadays I see a lot of girls going gaga over men in uniform. They are falling for the uniform, the lavish lifestyle of the army, that aura of being around a fauji. But sweethearts, trust me, loving a man in uniform is way more than that. It’s a matter of pride. It’s a matter of sacrifices. Unconditional love and understanding of his unapologetic behavior. And the most important thing - BELIEF.