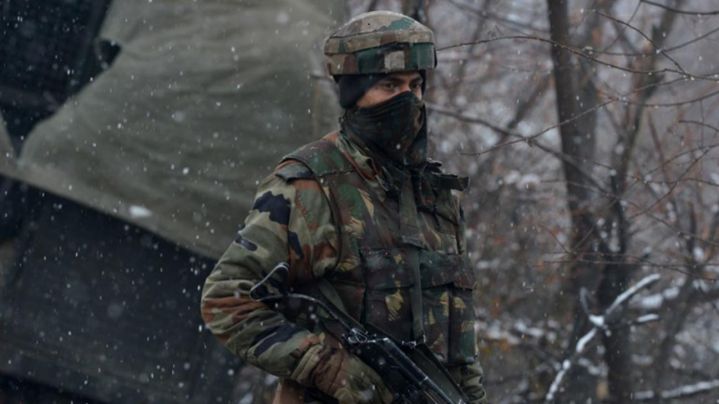 “Attrey ko bulaao,” Vic motioned frantically. He was lying flat on his belly. He crawled into the small clearing in the thicket of tress, and peered through the binoculars. (Two bearded men constantly looked out of the third-storey window of a wood-and-stone bungalow, as if waiting for something. They were armed with modern assault rifles and hand grenades. One of them turned and beckoned somebody from the back. A smallish man came into view, carrying a sack awash in blood. Together, the three men heaved the sack out of the window. It hit the ground with a sickening soft thud.)

“Shit”, Vic muttered through clenched teeth. Attrey tapped him on the shoulder. “Bloody, where do you wander off?” Vic asked impatiently. If he weren’t whispering, he would be shouting. Immediately, Vic began adjusting the younger man’s bullet-proof vest. “We have spotted six civilians inside till now, three men and three teenagers. Till now, I have counted four insurgents, but there could be more..,” Vic trailed, as he fished his pockets. He took out a spare pistol and attached it to the holder fastened to Attrey’s belt.

Finally, Captain Vikramjeet Singh Sodhi stood before Lieutenant Mriganka Attrey. Both men looked each other in the eye.

“One, we bomb the house and achieve hundred percent fatality. Two, we go in and indulge them in combat; we get a chance to rescue the civilians. What do you think? ” he asked his junior officer, and buddy since Academy days.

Attrey turned to the six men watching the exchange between the two officers. “Bhai log, kya bolte ho? Saab, aap batao?” he asked Subedar Raghavendar, a burly gentleman with half an ear blown away.

“Jaayenge, Saab,” the Subedar replied without missing a beat.

Vic stared at each man in the dark-green huddle they made, under the massive blue Pine. Calmly, he briefed his men about the plan of action and positioning, and checked each man’s bullet-proofing, helmet and ammunition. The men closed their eyes and remembered their Gods. Sita’s face flashed behind Vic’s eyes for a moment. A miniature bolt of lightning struck him in the chest. The men took their initial positions as Vic had ordered. He jerked his arm at them, and the men disappeared into the forest to circle the bungalow.

Vic remained standing at the spot where the eight men had been a minute ago. He had decided to lead, attacking the north-east wing of the building where they had spotted the maximum activity. He looked up at the sky, for it had begun to snow.

They say when a person is faced with a life-and-death situation, all dormant senses of the body are set in motion, strengthening periphery vision, bodily reflexes, and slowing time.

Vic now felt the sweat collecting between his shoulder blades. His heart rate had slowed. He could feel every single frozen breath entering his nostrils, leading to his lungs and the ensuing blood that rushed through his heart. He swung his weapon to the front, and it dangled over his chest. He clutched a pistol in both hands. He frowned at the clear garden patch ahead of him, and prepared to run across the longest six point five metres patch that he had ever run. Recently, there are many opinions floating around that since the Indian Army is a voluntary organisation, it is the same as ‘doing a job’ like the rest of us are doing. People have begun to think that being in the Army is similar to being a banker, or a financial analyst, or a software engineer. This post is an attempt to alter this flawed perception. That the pressure of running late for a Monday meeting is the same as that of running to carry out a rescue operation. That the anxiety of walking into a room full of Board of Directors is the same as walking into a clear patch of grass exposing yourself to a spray of bullets.

What would you do if you were in Vic’s position? Would you have bombed the house full of militants from a safe distance, costing innocent lives? Or would you take it by the balls and do what Vic did? And, would you be okay if he chose not to go in at all?

What if you were inside that house, getting kicked around, desperately clinging to any shred of hope that someone will come save you? What would you like Vic to do, then? If you were asked to be Vic even once in your lifetime, how much would you like to be paid? How would you react if someone questioned your salary? How would you feel if someone asked you why should you be entitled to canteen services or a government house? Or that why should you be allowed benefits under a Government Scheme?

When the soldier is not putting a cost to his life, then why are you?

In the moment where Vic is braced to break-in, what if he starts to calculate his Counter-Insurgency allowance and compare it to the risk he is putting himself into? It’s ridiculous, right. Well, we are ridiculous. Our apathy and lack of emotion is ridiculous. This culture of comparing valour, compassion and sacrifice to a few thousand bucks is ridiculous. We have become so self-involved and uncaring, wrapped up like little spiders in our webs of online-purchasing and getting-the-look so much so that nothing affects us anymore.

Imagine, if, in that moment, he begins to think like we do?

Imagine, if every young man in the country starts thinking like us, what sort of nation would be left to protect you?