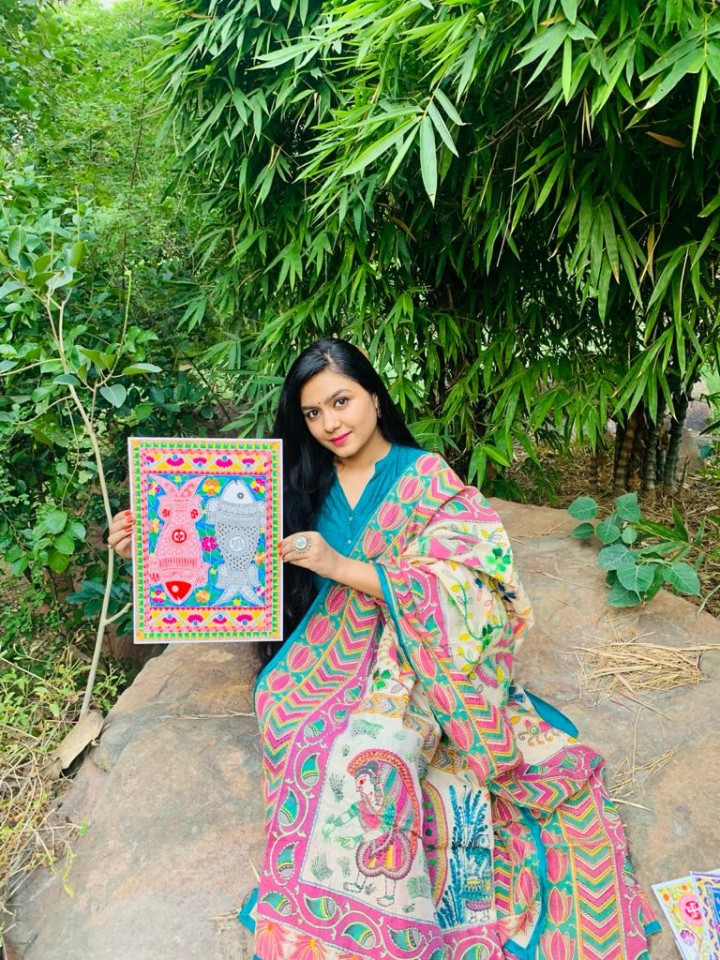 The actual call of the Madhubani Art is Mithila Lok Chitra which comes from the Mithila Region.

It is stated that Raja Janak, the father of Devi Sita, had embellished the entire area of Mithila with Mithila Lok Chitra on the occasion of his daughter's wedding. It is no longer identified now. However, in 1970, our honourable President V.V. Giri identified it as the 'Mithila Lok Chitra'; he also felicitated Jagdamba Devi from Jitwarpur with the National Award. Since then, this artwork was given an identification, and nowadays, it’s known nationally and internationally.

I started taking interest in arts and crafts, though I liked crafts more than art because I felt like I didn’t draw well. But, because I am a Kumaoni Brahmin from Uttarakhand and 'Aipan' is the folk artwork of Uttarakhand, my mom and her friends used to enhance our doorsteps with the Aipan Art. I used to sit with them, take a look at them, and participate in the artwork. That’s possibly the first time I might’ve accomplished something associated with artwork in my childhood.

Then in 2018, in my residence, I got a fracture, which forced me to take a month’s break from my workplace. At that point, I realised I had started doodling again and drawing small elements to spend my time. As quickly as I recovered, I started going to a place called Dilli Haat, close to INA, because I like exploring new places.

There I noticed many Madhubani artists displaying their artwork, and I felt like I could make it, and I had an internal voice telling me that I needed to attempt it. So as quickly as I went home, I took out my sheets and made six Madhubani fishes, and I uploaded them on social media platforms.

I received lots of appreciation and praises for making Madhubani artwork that's originally from Bihar, and I come from Uttarakhand so people felt it was something unique. And who doesn’t like being appreciated? So I started an Instagram page known as 'Madhubani Magic' in which I displayed my art skills, and now that page is known as 'Mithila Aipan'. This is how my artwork adventure began.

I feel exhilarated when my paintings are appreciated. I feel encouraged and stimulated to do better. I bet it’s a similar case with nearly everyone. Don’t we feel satisfied while our mother appreciates us while we work in the house and we feel like doing some extra work? It is identical to art. When you sense that a person appreciates you, you feel like making more and doing better.

I used to work in the media, and taking time out for your passion is exceptionally hard. Especially when your career isn't the same as your passion. Though I selected my career, I chose to do journalism in mass communication. However, once I realised that I needed to do artwork as well, it became hard for me. I used to work from 2 pm to 10 pm, and once I used to come home from work, my first task was to take out my sheets and begin drawing. It is in my nature to try to complete anything I begin, and so I used to paint the entire night. Then I used to sleep in the morning until 1 pm and then I needed to depart for my work.

This became my routine. I trust that the more we work, the more we live away from overthinking, tension and anxiety issues. This routine has indirectly stabilised me. I don’t have time for anything.

I in no way took instructions or have on education on it. I am an observer, and anything I even have learned is with the aid of watching numerous Madhubani artists and meeting countless human beings from the field. I also learnt a lot from the artwork galas I used to visit, and many Madhubani artists come, so I analysed a lot by knowing and understanding them.

I also started 'Madhubani sharing' Instagram page where we showcase the artworks of many under-appreciated artists whose incredible work goes unnoticed. I try to publicise their artwork on my Instagram feed so that everyone can recognise and appreciate it. It is my small endeavour to establish a strong artist community.

To all budding artists,

I would advise you not to copy from anyone. If you do as an amateur, use it only for exercise purposes. Don’t publish it on social media or anywhere. I have seen many people importing artwork designs copied from others. But, artists aren't individuals who copy. Artists create their artwork. Also, keep practising; practice daily. This may assist you in perfecting your artwork. Don’t they say practice makes a person perfect? So simply absorb that in your mind. Last but not the least, don’t compete with anyone; stay authentic because if artists also begin competing, it won’t help as artists create artwork to unfold peace and love, right?

I'm Grateful I Put In The Effort To Earn This Title.