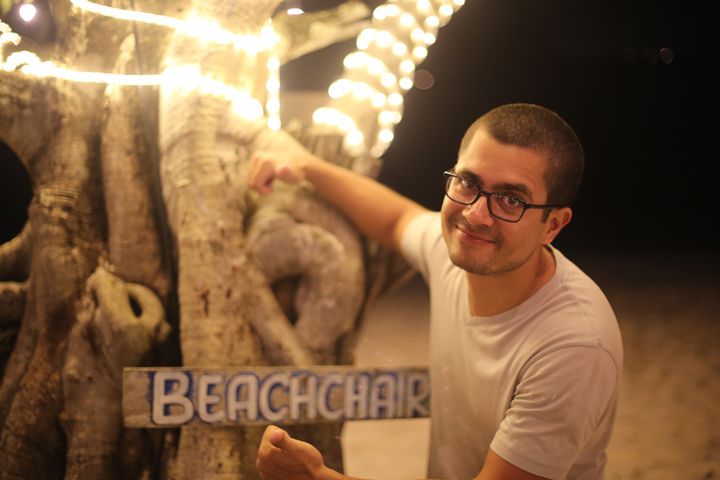 I had no clue what I wanted to do. I had a friend who did. He always wanted to be a geologist. Today he mines for gold in the US. Some people are like Sachin Tendulkar, you know. You give them a bat and the next 30 years they become masters in hitting a ball. They discover their purpose at a very young age.

But the majority are like you and me. We try to look for hints on which direction to take. We follow people we resonate with. We pursue our interests. Guidance of parents and teachers help. Through trial and error we somehow latch on to a path. It's tough but it happens.

My interests guided me more than my grades. Always. I used to love playing cricket so much that my dad would say “beta, 50% le aana. Phir jitnee cricket khelnee hai khel lena!” (son get a 50% passing grade so that you can play as much cricket as you want). I guess he knew that I was more inclined to follow my interests even at a young age. At the age of 17 I went to play as an amateur cricket professional for Newcastle Cricket Club in England. My performances got me a professional contract to play the following year as well. Twenty years later, cricket still runs in my veins but now I play recreationally. I also run the biggest amateur cricket community in India and have built a social app called 'CricHub' that will connect every amateur cricketer in the world.

When there is no solution to a problem I am facing I usually go ahead and create a solution for it. Scratching your own itch helps take the guesswork out of the equation.

My interests combined with my ability to execute on ideas have made me an entrepreneur. Maybe watching my parents do their jobs had a role to play. My parents are social entrepreneurs. They run their own NGO. They always worked on their own terms. They created movements, worked hard, built from scratch and always had the grit to fight for what they believed in irrespective of how unlikely the outcome they wanted seemed. I believe that some of that go-after-what-you-believe-in attitude rubbed off on me. In order to expose their son to what they were doing, they thrust me into the limelight at a very young age.

I got the opportunity to represent India at international conferences and meet politicians and celebrities. It wasn’t as red carpet as it sounds though. I still remember the uncontrollable shivers that ran through my spine as I took the stage to give a speech in front of thousands of kids. I was 12. I also remember freezing at a press conference because I didn’t know the answer to a question. The attention felt unnatural and uncomfortable. I tended to shy away from it but the side effect of the constant exposure to nerve racking scenarios was confidence.

I learnt how to mentally grapple with the shivers because with experience came competence and with competence came the belief that I had what it took to do it.

After I graduated with a degree in International Business, I started using some of that confidence to try things. PetChef, Casa Nostra, CricHub.com, Activator X Butter Oil, Startup Mansion, The Iron Sport, The Knot Crew, interviewing as an anchor for NDTV with zero journalism experience, interning for Citi Gold Wealth Management, working for a stock broker, becoming a research associate in a Private Equity team… you name it and I have probably tried it.

Every time I got stuck, I would look up to people I liked and admired. Tim Ferriss and Warren Buffet had a huge impact on my head. They introduced me to a different way of thinking about life, business, health, work and philosophy.

I kept on trying things. I started focusing on the process instead of the rewards. I kept on failing. Each failure offered a nugget of wisdom. Sometimes I was actually proud that I failed because I gained an insight into what I wasn’t fit for. I learnt to not only depend on my own experiences but to learn from the failures of others so that I could avoid them. To be a leader I learnt how to follow.

Through my trials and errors I somehow wiggled my way into working with Francisco Lorca, the founder of EthosData. I immersed myself into the business of Virtual Data Rooms and built the India market from the ground up. I treated EthosData as if it was my company. The learning curve was steep. After Francisco had a bit of confidence in me, he allowed me to run the business my way. He empowered me to take decisions, run a team, build processes and demonstrate results. EthosData made millions. With the success of the company I also found some financial success. I went from earning Rs. 20,000 a month to over 100,000 a month. Sometimes I would earn much more. We built a system that was fair and rewarded performance. Our incentives were aligned.

Over a period of 10 years I got a better understanding of what I was good at, what I was not good at, and what it took to build and run a successful company. I kept working hard and earning till I realized lots of cash in the bank gives you peace of mind sure, but it does not drive you beyond a certain point.

Money is a byproduct, not an end in itself. You have to enjoy waking up in the morning to do what you have to do, again and again and again. That kind of energy and enthusiasm needs a purpose that goes far beyond having more dollars in the bank.

My entrepreneurial experiments never took a backseat, even when I joined EthosData. What changed, however, was why I wanted to create. Earlier, I concentrated on wealth, making lots and lots of it. Now, I wanted to find solutions to problems that I was personally facing. My interest in health, well-being and sports was the one constant throughout my life that I was always looking to improve and optimize. I was always looking for an edge.

In 2011, I incorporated a company called 'Proven Health Solutions Private Limited'. I knew I was going to do something in the health and wellness space but I still did not know what. So I went back to experimenting. I kept reading, learning and implementing, first on myself and then on others.

One of my experiments was at a gym. I charged 3,000 rupees for three sessions of personal training three times a week (Mondays, Wednesdays and Fridays). 7 people joined. 1 dropped out. All I made them do was one exercise - the 2-hand kettlebell swing - as intervals, 30 seconds swing, 30 second rest for a total of 30 minute per session. I measured everything. I then tweaked their food plan and made them send me images of what they were eating. I shared the results with everyone on the program to make it competitive. Look what happened in one month:

Their pants were falling off. They were much stronger. I felt proud, validated and then never did it again despite repeated requests. Why? Because I couldn't scale it. It required all my time and attention. I wouldn’t have a big enough impact.

In March 2013 I was living alone. I was on 'The Slow Carb Diet'. I just did not have the time to cook so I was always ordering in. No matter what I ordered, it always came with a compromise. The quicker I wanted the meal, the unhealthier it was. Even if I was patient, there were deficiencies in key nutrients that I had to fulfill through supplements. The thought of having a balanced meal in a glass which was nutritionally complete, easy to make and tasty excited me. It would be an amazing default solution to my day to day needs, especially during the work week.

I went back to experimenting. I tracked all my blood results to make sure I was objective in my findings. I tweaked and tried, sourced and partnered, spent and progressed. Four years later, we launched Happy Ratio.

Happy Ratio might have been sparked by my love for nutrition and science but it goes way beyond me. It is the result of feedback from customers from 37 cities across India. It is the outcome of a genius team of world class specialists, people who are incredible in their areas of expertise.

All those years of failures, doubts, questions, experiences and successes built me up to be able to do something that changes the world. Happy Ratio is my purpose beyond money. It is what feeds my body two out of three times everyday.

After living off the most nutrient dense balanced meal on earth since August 2013 I am confident of the incredible impact on health it will have on people young and old in every sphere of life. These are the kinds of comments I wake up to every morning.

Dear 11-Month-Younger Me: Don't Listen To Anybody, ANOME Will Stand By Its Name I Promise

The Story Of The Logic Behind The Logical Indian