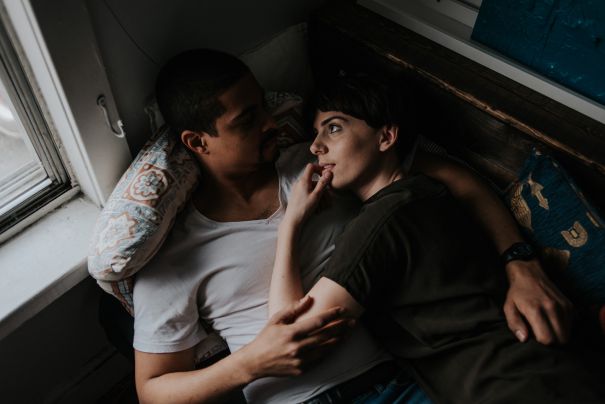 Shubha and I were in love and planned to get married soon. We had been staying together happily in a flat for the past one year. Shubha was working in a government organisation. One day, she told me that her sister, Saumya, who had just completed her graduation was coming to Delhi and would be staying with us. She said that Saumya wanted to prepare for the entrance exams because she too wanted to take up a government job later on.

I was not very comfortable with this idea. I did not want anyone else from either her family or my family to stay with us at that time because we were not yet married. But Shubha had no such issues and I was unable to say, “No.”

When Saumya reached Delhi, Shubha and I went to meet her at the airport, booked a taxi and returned to my place. Shubha and I were staying in a two BHK flat. We had already decided that both the sisters would use one bedroom and I would use the other bed room.

Things became normal within 2-3 days after Saumya became familiar with me. I was good at Mathematics and Reasoning. So Saumya asked me questions related to these subjects without any hesitation. I really helped her out.

The three of us slowly became very close to each other and lived like a family.

Shubha had to travel to Bangalore for some official work for 15 days. When she told me about it, I asked her to check with Saumya first. I wanted her to ask Saumya if she was comfortable staying with me. Saumya had no such issues.

We went to the airport and dropped Shubha. We reached home at around 8.30 p.m. and I decided to watch TV for some time. Saumya had already changed and served me a cold drink. Shubha always did this for me. After some time she asked me if she could serve me my dinner. I told her that she could have her dinner if she wished to do so. I told her that I would have mine later on, when I felt hungry.

She requested me to have my dinner with her and I said OK.

After we had our dinner, I helped her solve some questions related to Reasoning and Mathematics. I then went to my room, had a video chat with Shubha and slept.

After having my breakfast in the morning, I was about to leave for my office, when Saumya asked me to drop her at the coaching centre. I did so. When I returned home from my office, I noticed that my house was locked. I wondered where Saumya had gone.

I went to the roof of my house and found Saumya there. When I asked her why she had come here, she said she was feeling scared and could not stay alone at home. I told her to come down with me and assured her that I would be with her at home.

I suggested that she try sleeping alone and told her that she could always call me if she needed anything. But she could not sleep that day as well. On the third day, I returned home from my office and saw that Saumya was suffering from high fever. I went to the doctor, bought some medicines and fruits for her and slept in the same room with her.

She was sleeping comfortably in my arms. I am a man and I did not know how to react to this.

The next day I applied for leave as Saumya was still suffering from fever. I took care of her because I had promised Shubha that I would do so. I cooked some breakfast for her and fed her too. I was with her for the whole day. In the afternoon, Saumya told me that she had a splitting headache and that her entire body was aching too. I applied some balm on her forehead. She felt better and was feeling relaxed now.

She slept on my lap. Now I developed strong feelings for her. In the morning, she kissed me on my cheek and said, “I love you.”

I did not know what was happening to me. I reached my office but was not able to concentrate on my work. I thought of her kiss. I returned home in the evening and she hugged me tightly. She kissed me on my forehead and told me that she had missed me for that whole day.

I took her in my arms and went to my bedroom. She was also very excited with whatever was happening between us.

We were just about to start when I got a video call from Shubha. Saumya asked me not to answer the call. I now became more confident about Saumya.

The more the phone rang the more fun we had. We did not sleep that whole night.

In the morning, I called Shubha and told her that I was in the hospital because her sister was not well. Saumya also supported me. She told Shubha that she knew she would be worried and so she had asked me not to talk to her about the fever. By now, Shubha too was busy with another guy. This guy was her senior in school and Shubha told me that she was happy that she had met that person.

Shubha and I had not talked for almost 7 days and we were both fine with this because we both had got other partners.

Saumya and I had a lot more fun than we had expected during those fifteen days. When Shubha came back from Bangalore she told me that she had got a transfer to Pune. So we could not continue our relationship. Saumya immediately said that she wanted to stay in Delhi. She said she wanted to continue with her entrance exam preparation here itself. But Shubha did not accept her decision and took her with her to Pune.

When I think of all these things, I wonder why relationships were created. I really think they add no value to our lives.

Relationships may well start at a physical level, but if they are nurtured with love they can connect us emotionally and mentally too. This young man seems disappointed. Perhaps he believes in meaningful holistic love and relationships. Share this story if you too feel that the right person will fill his life with love at the right time.