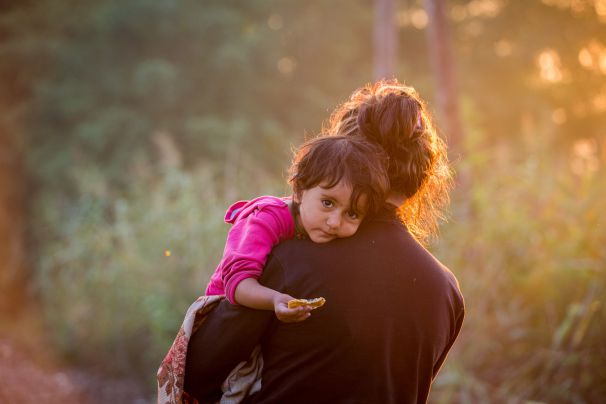 I belong to a rich family. A man belonging to a well to do family fell in “love” with my younger sister. But she rejected him. So he trapped me into getting married to him by making me fall in love with him.

My father was not too happy about the fact that I was getting married into this kind of a family. He had his own set of issues with them and had interacted with all of them previously. Even on my wedding day, he said, “You are my daughter. You were the first one to bring so much joy into our lives. My happiness lies in your happiness. Tell me even now if you wish to back out from this marriage. I will face all the 1000 people sitting out there right now for your happiness.”

I just said, “Daddy, I am marrying the man I love. I know I will be happy with him.”

I left behind all the luxuries that I had enjoyed for 21 years of my life. I had never done any household chores so far. But I started doing them now.

I was expecting a boy this time. Not because I favoured a boy over a girl but because I did not want to listen to the taunts that I had to hear each day.

My newborn girl was the prettiest member of my family but my mother-in-law was so disturbed by the fact that I had given birth to another daughter that she told me I was incapable of giving birth to a son. My co-sister-in-law gave birth to another boy after 6 months and she was appreciated by the entire family for this.

My third child was a boy. I was overwhelmed with joy because I knew everyone would shut their mouths now. But my mother-in-law and sister-in-law continued to torture me.

I had only my husband to tell all this to. I had been married to my husband for 6 years now. But I had started hating my husband's family for the way they ill-treated me.

One day, I told my husband that I wanted to live separately because I just couldn’t take all this anymore. I was always treated differently and I did not have any freedom at all. We moved out after 2 years but my husband’s family blamed me for this decision. Of course, they were right in saying this but I just couldn’t bear the pain that they were putting me through.

Every girl dreams of being married to a wonderful husband who has a wonderful family. I too had these kinds of dreams.

Soon after we moved out of their house, my in-laws’ hosted a casual get-together at their place but they refused to invite me on this occasion.

I knew that ours had been a love marriage. So I had always had very few expectations from them.

But all hell broke loose in my life one day when I received a call from an unknown girl.

She said that my 31-year-old husband was having an affair with her. I was completely shattered when I heard this but he seemed to be having a great time with her.

I simply wasn't able to digest the fact that 10 years of my married life had been ruined because my husband had fallen in love with another woman at his workplace. I recollected that he had once mentioned to me in the passing that he was getting attracted to another woman but he had also told me that he would overcome his attraction for her quite soon.

I gave him a lot of space at this time. Every day I did my best to make our marriage work. I stayed at my mother’s place during this time.

One day, the other woman called me up and told me that my husband was begging her to love him. She then said that he had even told her that he would leave his wife and three children for her. This other woman behaved in a very strange fashion. She would keep giving me updates about what they did but had blocked me on her phone.

But I knew that she texted my husband constantly. They went on dates, for outings and spent the entire day at resorts. My husband had started spending his entire salary on her now. I begged my father to support me financially at this time. He gave me all the support that I needed.

I have now started selling clothes on an online portal to earn money for our food and to pay for my children’s admissions.

After a while, I came to know that my husband had even tried to commit suicide once. His parents had wanted him to marry the girl he now loved and had asked him to put my children in a boarding school. But he had refused to do this.

Once upon a time, my husband and I lived in a home with my kids. There was so much fun and laughter in our home. But that very same home has turned into a house now. All that one hears now is silence because no one talks to one another now. My children yearn for their father’s love but their father has not even seen them for the past one year.

Life is not easy. Life doesn’t always have a happy ending. Nothing is permanent in life. Everything fades away with time.

Time changes several things in our lives. People change. Situations change. Relationships change. People flit in and out of our lives. Can we ever control the things that happen to us? Maybe. Maybe not. Who knows? For sure? What about our connection with our innermost selves? Does that change too? Do we become better or bitter human beings when life tests us repeatedly? Share this story because one little alphabet has the ability to define the quality of our lives.