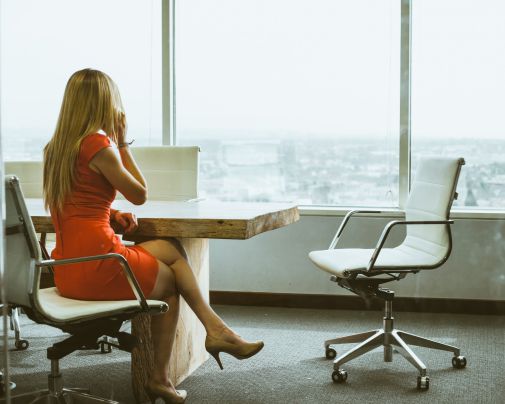 I started working at a very early age and had to go through several hardships to prove myself at work. It had been just a year since I joined office and I was facing a hard time.

During those early days, I came across many good and bad friends and colleagues. One day, I was sent to a senior colleague for some work.

He was a senior person, more than twice my age.

When I started discussing the work assigned, I could sense that there was something inappropriate in his gaze. I ignored it and returned back to my desk but I knew that this person had to be avoided.

However, I wasn’t spared. I was frequently called to his office for no reason.

He would make me sit and stare at me.

This continued for a few days. At times, I could avoid the situation but there were times when I had no choice.

One day, he directly asked me to sleep with him as if it were a regular affair for him.

I was scared and shocked. I immediately ran out of his office. But the real him was yet to be unmasked. He would always tell my immediate boss that he had some work with me and I'd be sent to his office.

I stayed at a place close to my office. One evening, when I was rushing home after work, I received a message from him that said he was coming to my house!

My feet were frozen and I was scared to death. I could not move even an inch.

I somehow gathered myself and headed home. When I reached home, I immediately locked the door, moved a table to block it and sat near it with my badminton racket.

My situation was such that I could not even share it with my parents because they were caught up in some family issues.

I didn’t know how to deal with this situation but decided to face it my way. He came around 11 p.m. and knocked the door slowly because of the neighbours.

I could hear him knocking but was unable to do anything. I prayed for help but no one came.

He called me on my mobile and threatened that if I didn’t open the door, I was finished as far as my job was concerned.

Unfortunately, mobiles didn’t have a recording option during those days otherwise the scared child within me would have done something to help herself. Luckily, he went back that night because he had no other choice.

But the next day was even harder as I had to face him now.

The first thing I was told that morning was to go and meet him. I tried to hide in places where no one went. I even spent a good number of hours in the washroom. But to my bad luck, I was being hunted like a thief.

By the end of the day, I was forced to see him. That is when I got a bigger shock.

He shamelessly said that he could do as he wished right there (in his office) and didn’t need a bed to fulfill his evil desires.

Those were his exact words and I was given the option to accept his proposal and be happy in the job or leave it. I obviously chose the second one and handed over my resignation to my boss. Unfortunately, I was bound by contract and could not leave prior to its completion.

There were still 2 months to go and I had to survive during that period.

I avoided being seen in gatherings and particularly on the floor, which had his office. However, one day, I happened to leave the office a little later than the others. That is when I saw someone standing right in front of me. It was him!

He said that he wanted to speak to me but I insisted on leaving. So, he followed me to my house.

I was so scared that I didn’t enter my house and stayed at a juice center for almost 3 hours.

That incident was enough for me to take a stand for myself. I called him and warned him that if he didn’t stop harassing me, I would complain about him.

He just laughed! I knew that the D-day had come.

I rehearsed what I had to tell my boss. The next day, I went to my boss’ office and told him everything.

He was a good listener. I was consoled and sent back. Now I had no fear.

Two months passed and I left that office to start afresh. Yet, he kept calling me. He always managed to find my new number from my old friends. So I broke all contact with them as well.

I changed the place where I stayed, I even changed the city and state but he would still find my new number and call me.

It’s been 10 years since that incident but the nightmares are still fresh as though it happened just yesterday. Now, I have stopped changing my numbers and I pick up his calls and remain quiet.

There were surely many ways to stop this nonsense but I found that the best one was to avoid him.

I could be wrong but I did whatever I could.

Even though this happened years ago, speaking about workplace sexual harassment can be liberating. Most often in cases of sexual harassment at the workplace  the affected person does not react till things reach a point where they spin out of control. Harassers will try and reduce a victim to a "She said, he said," situation.

Instead, what if we just said "What are you looking at?", the very first time we are uncomfortable with someone. The harasser is probably not expecting you to speak up, so he/she will be disarmed. But not dealing with the situation will only make your harasser bolder.

Usually, harassment cases are about power and control and most harassers work in anonymity. They are very conscious of their reputation in the workplace. They use a victim's silence as a weapon to further scare them into submission.

Working women should educate themselves on laws regarding sexual harassment at the workplace (The sexual harassment of women at workplace Prevention, Prohibition, and Redressal Act 2013). There are very clearly laid out and this mechanism exists now. Women tend to be sympathetic if the harasser is an old person, and we end up giving them the benefit of doubt because we are conditioned to believe that the elderly are to be respected and will do no harm. But the law is the law for everyone.