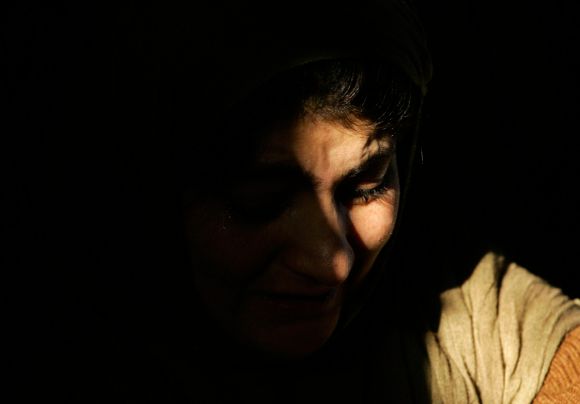 In India, you're told from childhood to adulthood that you are never allowed to show skin. Ever. If at all at any point you do, you are bashed for it. Verbally, physically, mentally, emotionally; by parents, friends, relatives, strangers on the road. Until a man decides to bash you for no reason at all, when you're on the street and he masturbates with his penis out as you walk by, or as other women walk by, just because.

There is nowhere a woman is allowed to be naked. So when I walk out wearing clothes from my neck to my toes, I wonder if I'm safe, because my mother insisted I would be. I know I'm not, people tell you "You're safe! It's all okay!" but it's not. You know someone somewhere is watching you, because you're a woman. You know someone somewhere is plotting to hurt you, by making you watch, or by making you, as simple as that.

So where can I be naked? Where is a woman allowed to be completely f***ing stripped bare-bottom naked? Men get to be naked in their houses, with half lungis, and most of the times, even bare chests. Children can wear fluffy shorts and gowns and dresses because they're "cute".

A woman is ugly, by this logic, so she cannot be naked anywhere. Never. Ever. No nudity for a woman. No reprieve for her. She has to wear a bra for her breasts, and she has to feel like the sun could burn her if she stands under it directly without the protection of her multi-layered attire.

When a man whistles at me as I walk across the road, I think it's my fault. I immediately think of the mole between my breasts and curse, wondering if my kurta has too low a neck. I may have looked at him a second too long, or maybe I had it coming because I wore a t-shirt, one that covered me completely, but that's never enough and I know it.

When a man masturbates and enjoys my terror at the realization of what he's doing, I think I should've acted slower, gotten him caught in the act and made sure that I took slow steps toward the matter. Because I'm not a woman if I haven't become the living avatar of Goddess Kali and taken my revenge, after all. I cannot feel mutilated before I feel anger, and once I feel anger, I'm acting "irrationally".

The worst part is that if it isn't rape, it isn't even a crime. So long as your senses have suffered, and your mind has taken you wandering down that dark and lonely path and your "body is still pure", you're fine.

Some men, it felt to me, don't care if the woman feels, screams, breathes. It feels like they're saying, screaming, "She's a woman. She knows what's coming to her."

So when men do things to me, look at me in a way I know is wrong, touch me in a way I don't want, force me to feel things that make me cower in fear as I cross the street in broad daylight, I have to ask the people, "WHERE AM I ALLOWED TO BE NAKED?"

In my bathroom, in the privacy of four small walls, as I attempt to have a bath, I notice the window opening slowly. To reveal that it isn't my imagination, to reveal that someone is watching me as I strip in the only real place I can strip. I can't change in my room, people will see. Mother tells you this the second you blossom. I can't change outside the bathroom at all, see. My body is to be hidden in those four small walls, clean, dirty, so be it. You deserve the bathroom, and if you dare come out of it, God save you.

So when I see the lower part of his face, I scream. I can't make words that sound intelligible because that's how primitive my fear is. I feel fear like never before because THIS HAS NEVER HAPPENED BEFORE. I'M ALLOWED TO BE NAKED HERE. WHY ARE YOU WATCHING ME? WHY ARE YOU HERE? WHY WHY WHY?

He's here, of course, to tell me, to tell all of us women that even with our windows and doors locked, between the tiniest of spaces, in these empty four walls, no matter where, we cannot be bare to this world. We don't deserve to be naked anywhere, not even to cleanse our bodies as they do. We are never allowed to feel completely safe, because we are baby making machines. Everything is off limits to us. So no, don't get naked there. Don't get naked anywhere.

Because when I realized he was watching me, I screamed. When I calmed down twenty seconds later and he was gone, I knew I couldn't go behind him. I, instead, went to my room and felt the fear paralyze me. It sounds all so dramatic, doesn't it? But how can I explain to you what this violation feels like? It isn't that my videos will be on YouTube, because he could've been taking videos, and it doesn't matter that he was aroused and probably touching himself at the thought of my unsuspecting self having a bath, as innocently as a child would, because I don't even know how f***ing long this has happened, so what does that matter? It is that I can't even get naked there. It's that the first thing I think, (when it's all supposedly "over" and my friends tell me to call the cops and the building manager), is "Why was I naked? Why was I naked in there?"

Soapy lather between my naked arms, my legs, my underarms, my towel still wrapped around me tightly, I try not cry as I think of how women must live with the fear of unveiling their bodies to a society that just doesn't want to see. That the bathroom, too, is off limits to me.

We have swallowed hurt for far too long and let the world assault us in every level, each time thinking "at least it wasn't as bad as..."

Stop. Share this article, and let them know we're not having it anymore.