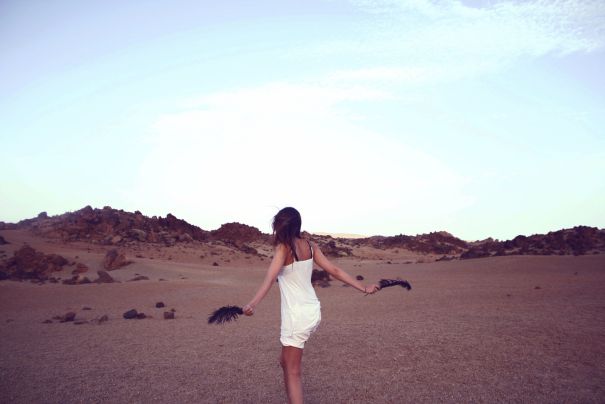 One I had made up my mind, it was all too easy to bring the situation about; enticing a man isn’t difficult.

I’m not saying all men are mindless sex zombies, I’m just saying it’s usually not hard to bring that kind of situation about. I don’t know why I’d been so intimidated in the past to be flirtatious. All I had to say was that I’d love to see his place and with a screech of tires, the Uber backed up half a block and took a right turn and we were there before I knew it. He held my hand as we walked up the creaky wooden steps to his apartment and I pretended for just a minute that he was someone I could have breakfast with.

His apartment was nice. Regular, I suppose, for a 20-something year old bachelor. He handed me a glass of wine and I downed it all quickly to ease my nerves. Shit, I thought, I’m so nervous. I told myself to quit being a baby – after all, I was twenty, and God that’s late compared to most people.

All my friends had done it and it’s just sex anyway, hadn’t it always been my choice? And now this was how it was gonna go. I had been thinking that by the time I finally did lose my virginity, it would have become this big deal because I’d gone so long time without sex. Or maybe, I thought, it wouldn’t be a big deal at all, maybe it would just feel like another milestone I would have to get through on my way to becoming who I am. A coming of age, if you will. Either way, the world would not be affected by this event.

I would wake up the next day, still a person, and life will go on. The world would not care that I reached this breakthrough in my life and growth and sexual development. In fact, this tired old world would probably sigh and say, “So? Isn’t it about time you lost it anyway? Most of your friends lost it five years ago, keep up.”

It’s about time I grew up a little, I told myself as he clumsily began to tug at the zipper on the back of my dress. God, this is just like a dumb high school movie, he can’t even get the damn zipper undone. After a few awkward moments of struggling with clothes, he was ready to go. Oh no, I thought, I need another glass of wine, but there’s no time, it’s now or never…

And all of a sudden it was happening, and I wasn’t feeling much – emotionally I mean. For some reason I started thinking about how carnal this whole thing was. I mean, this weird activity is at the core of our primal instinct, and I was kind of excited at how connected we were becoming to our own humanity. We were basically cavemen in that moment. Then I decided that it was not the time to be thinking about cavemen.

So instead I closed my eyes and tried to hold onto the alcohol in my system. I focused on the dizziness in my head and the wobbling room rather than the wrenching pain from the rhythm inside me. My inhibitions slid away. I was one with the caveman.

He seemed to be enjoying himself, grunting and heaving in a very Neanderthal-like fashion. I didn’t think he was so bad, after all, this guy I barely knew. We had a lot in common, actually: each of us was using the other to fill a void of boredom and loneliness in our lives.

Our sex was a self-medicating distraction. He finished and with a final, primordial grunt, flopped onto the bed next to me. We lay there for a moment. Cautiously he reached for my hand.

“I have to go,” I said quickly, and fumbled around in the dark for my clothes, which is probably the most awkward part of having sex, honestly.

He followed me to his door and grabbed my arm before I fled into the night.

He was so hopeful and eager; it was actually very sweet. This man respected me, and I decided I respected him.

“Sure,” I said, smiling slightly, swinging my bag over my shoulder as I turned away.

I have a lot of feelings. I would like to spew them. Thank you.