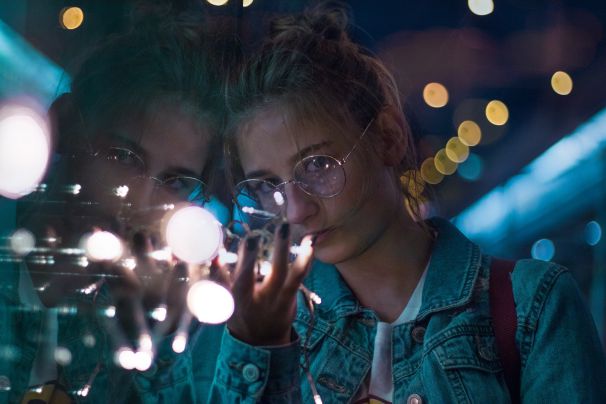 I am a 24-year-old woman. I broke up with the man I thought I loved two years back after being in an unsuccessful relationship him. After my break up I started getting in touch with my friends and seniors. I was desperately trying to move on with my life. I felt completely lost at that time. One day, one of my school seniors pinged me on Messenger.

He had been trying to get in touch with me for over 4 years now but I had never replied to him.

That day, I just thought of replying to him. I wanted to have a casual conversation with him. That is where the entire story began.

He was not a very good looking man and was working for a software company in the US.

We wanted to get to know each other so we started texting each other. We then started making video calls too.

After a while, I started getting attracted to his sense of humour and the way he lived his life. Slowly I started liking several other aspects of his character. He looked like the man I had always dreamt of.

He too seemed to be interested in me. He even told me that he had been trying to get in touch with me all this while because he wanted to be with me. In time, we felt we had become close to each other mentally.

One day, he asked me to become a part of his life. But I rejected his proposal and said, “Right now I need some more time to move on from my past.” he said, “Take your time. I’ll wait for your answer.”

I thought about his proposal for two months and then decided that I should give myself one more chance. So I said, “Yes” to him. He was very happy.

I told him that I liked him a lot and was not too sure about whether I really loved him. He said he will make me fall in love with him.

We grew closer with time. So after a while, I told him to make an official announcement about our relationship. He said he would do that but he needed to discuss our relationship with his parents first. He suggested that I too do the same thing.

I didn’t tell my parents anything about our relationship because something about him was bothering me.

When he called me again the next time, I asked him again about when he planned to make an official announcement about our relationship. He said he had talked about me to his mom and she had agreed to our relationship.

I too spoke to his mom and found her to be a soft-spoken woman.

I asked him the same question again. He said he needed his father’s consent too and asked me to do the same with my parents too.

After that suddenly the frequency of his texts and calls started reducing. I decided to remain cool about it and didn’t try to contact him either.

But one fine day he started sexting me. Initially, I was very uncomfortable when he did this but he said that this was a very normal thing and I had better get used to it because I was his girlfriend now. He said he was attracted to me alone. So I agreed to sext him too.

He then said that he couldn’t wait to meet me. He was planning to visit India after a month just so that he could meet me and his mom. But later on, he backed out on his plan by saying that his financial condition was not too good right now. I believed him.

Several other friends of mine had told me that long distance relationships did not work out. They had asked me to think twice before getting into this kind of a relationship but I had always disagreed with them. I would tell them that we trusted each other completely.

We would often talk about our dreams, fantasies, aims, marriage and everything else. It was only recently that I had found a sudden change in his attitude.

He only sexted me now. He was not too keen on the other things that were happening in my life. In fact, he was not keen to know more about my career or even my health.

He had only one purpose behind his texts – he wanted to have virtual sex with me. And this disgusted me.

So I decided to rebel. I asked him if there was anything between us now. I wanted to know what had happened to him so suddenly. I asked him why he was behaving so weirdly now. He said, “Everything is alright. If you don’t feel comfortable with sexting, I will not sext you anymore.”

He was trying to change the topic. But I was out of my mind. I said, “You don’t need to explain anything to me anymore. I know what exactly you think about me. You seem to have no feelings for me. I am just fulfilling a need of yours. I know I am just an option for you – an element to sext with.”

I then asked him one last question: “Tell me. Is there anything between us?” He said, “I don’t know.” I was dumbstruck. He was telling me that he didn’t know if we really shared anything even after being with me for 2 years. So I said, “I want to quit.” He said, “If you want to end this, you can.”

We didn’t talk to each other after that. I am still confused. I don’t know what I should do. Should I move on with my life or try to reconcile with him?

Sometimes, we just have to allow life to take its own course. Solitude or even simply taking some time out from a confusing situation gives us the much-needed clarity. Maybe the answers that we are seeking will come to us of their own accord if we just learn to live each day of our lives in a fulfilling manner. Do share this story because only when we go through the maze of confusion do we gain the clarity we are seeking.