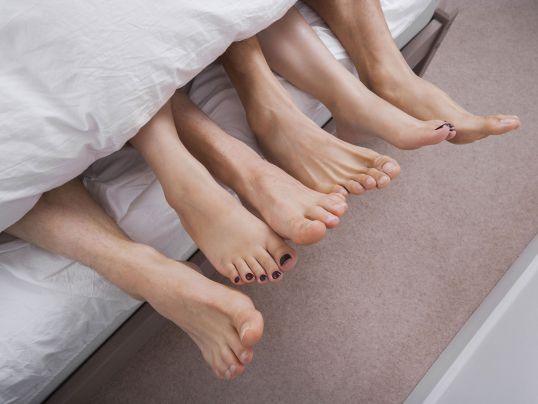 I find it strange that my neighbour lives with the hope of going to heaven after doing so many wrong things in her life.

My neighbour’s family is one of the worst families I have ever seen in my entire life. The head of their house is a man from a village. He works as a government employee. He was married and had a daughter too.

His wife loved him but he did not love his wife. My mom used to say that she had seen him pouring hot rasam on his wife’s head because it was not yummy.

This man had a close friend. He would visit him very often. One day he saw his friend’s sister there. He eloped with her despite being married. Both of them then chucked his first wife out of their house. His second wife then gave birth to 5 daughters.

I think God doesn’t wait for people to die to punish them. He does not put them in a fire after they die either. He punishes them before they die.

All the daughters of this man’s second wife gave him problems all through his life. The elder daughter was her dad’s pet. She was a very arrogant girl. She studied in a private school. She eloped with a guy when she was in 7th grade and was missing for 5 years. When she returned she was pregnant.

She did not get pregnant with the guy she had eloped with. She got pregnant with his friend. Though both the guys were chasing her they did not want to live with this kind of a girl. So she came back and settled with her family.

Her family accepted her and she gave birth to her first child. It was a baby boy. Within a span of 3 months, she became pregnant again. This time no one knew who had fathered the child.

She aborted all the innocent babies after getting pregnant repeatedly. Her mother would then bury them in their garden.

Finally, she got married to a nice guy. She had a girl child with him. They lived together for 15 years. But one fine day he committed suicide. No one knows why he did this. But this woman got herself a new husband the very next month and now lives with him.

The 2nd daughter too was just like her sister. She had 2 boyfriends simultaneously. She would go on trips with both the guys at the same time.

One fine day she returned home with a box of sweets in her hand saying that she was married to one of those guys. They had registered their marriage in a court.

Her dad beat her up with his belt so badly that she couldn’t walk for a few days. She was under house arrest. But her mother stood by her. She allowed her daughter to go out freely.

One fine day, her mom got a call from a hospital saying that her daughter was admitted there. The lady ran to see her daughter. But to her surprise, her daughter had been admitted to the hospital to get an abortion. When the mother asked the daughter how she had let this happen – the girl said she didn’t know how it had happened. This girl continued to flirt with several boys for many years. No one really knew the exact number of abortions she had.

They were looking out for an alliance for this characterless girl and managed to find a bakra too.

She did marry him. But she stayed with him for just a week. She then came back to her house saying that it was difficult for her to get adjusted to that family.

Again the mother welcomed the daughter back happily into the family instead of advising her to live with her husband and his family.

She got pregnant the very next month and delivered a girl baby later on. But this baby was not her husband’s because she had not been in touch with him at all. It was her boyfriend’s baby. She had fallen in love with the new hero of her life after coming back to her mother’s place.

When her dad questioned her about the baby she eloped with her boyfriend.

The boyfriend turned out to be her cousin - her mother’s sister’s son. She lived with him for a few months and then came back to her mother’s place.

She too now lives with her kids in her parents’ house.

The third daughter followed the same path that her elder sisters had taken. She married her childhood love because they both loved each other madly. She got married to him and lived with him for 6 months. During these 6 months, she started going around with her colleague.

Her husband caught them red-handed when she was hugging him inside his car. He complained to her dad. Her dad was pretty old now. He could not do anything for her. But her mom stood beside her like a rock and asked her to come back home and live with them.

Fortunately or unfortunately the girl got an onsite opportunity for 3 months. After going there she kept delaying her return to her hometown. Finally, she came back after 15 months – but she had a 3-month-old baby in her arms. Her husband did not file a case against her.

He just divorced her saying that the kid was not sired by him and moved on with his life.

She became pregnant again immediately. Her second child was born when her divorce case was going on in the court.

God alone knew who the father of these two kids was.

The 4th daughter was like a tomboy. She grew up like a boy but at the end of the day, the same blood was running through her veins too. She had an arranged marriage. But her husband ran away with his girlfriend because his girlfriend was 6 months pregnant. Now the 4th daughter too had a secret boyfriend and became pregnant after a while. When her secret boyfriend came to know about her pregnancy he became close to his ex-girlfriend and eloped with her.

But finally, this girl married her secret boyfriend when he came back to her and is now leading a decent life with him.

The last girl had a boyfriend when she was in her 8th grade. They loved each other for almost 15 years. But just before they decided to get married she demanded that he convert to her religion.

He was not ready to do this. So she happily bid him goodbye.

She then found an alliance for herself and her family got her married to him. They lived a happy life for 2 weeks.

She then came back to her mom who lovingly took her in without even advising her to go back to her husband.

She finally divorced her husband and is now in a relationship with her schoolmate whom she met recently after years.

The father of these girls is too old now to question them or punish them for their casual attitude towards their relationships.

But what bothers me the most is the fact that their mother is supporting and standing by all of them even when they are wrong. She doesn’t like anyone talking about them or advising them.

She then said that the doors of heaven were always open for people like her and her daughters who prayed every day. I did not know whether to laugh or get angry when she said this.

I don’t allow my brother’s or sister’s children to play with her grandchildren. I believe in the universal truth that we should never expect a rose from a cactus.

I know that each and every person on earth has every right to lead his/her life his/her way. All of us are here to enjoy our lives. But I feel we should not destroy the lives of other people in the name of marriage too.

Do share this story if you too feel it is very easy to pass judgements on the actions of other people. Let’s leave it to God to do his work. Let’s not condemn or criticize people without knowing the entire/real picture. Maybe we can really and clearly demarcate things into ‘right’ and ‘wrong’. But maybe what looks ‘wrong’ to us feels ‘right’ to them. Let’s respect people even if they are flawed because we are all flawed in our own way.