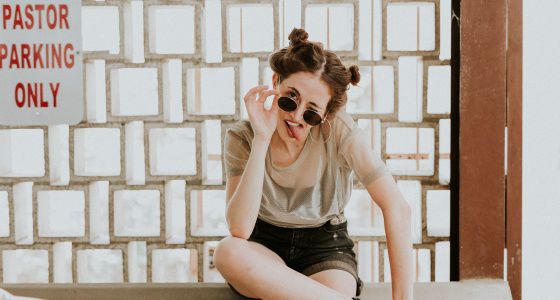 If it’s at least four inches long, then shut up and keep reading.

There is such a thing as a micro-penis and you DON’T belong there. Ask yourself one more time- Do you have a genetic disorder or a hormone imbalance? Nope, I didn’t think so. Yet, you’ll shelter your fully erect penis from my gaze because you think it’s too small.

You know what the irony is? The boy with the micro-peen will overcompensate with his confidence and his hands, but someone who’s as normal as you are will 'hijab' your little soldier. For a full 60 seconds, I’m really annoyed with you. When I’ve trusted you enough to throw my body wide open to you, I’ll expect the same in return. That’s full access, boy, not some half-assed penetration-only consolation prize. I wanna touch, feel, see, smell, taste whatever you plan on putting inside me (all in that order).

But then I remember why you’re being silly like that. Pressure. You’re the guy who has the least success picking up women at a party because they’re too blind to see how smart and funny you are. Regardless of penis size, they say that your brain is your biggest asset. I agree, and that’s why I’ll happily blow you for blowing my mind.

Which is why, boy, I didn’t count on YOU being shy when you’re the most awesome guy I’ve been with (so far). That’s how I got here because I do better at life every day. I don’t take a lesser deal… and then there you were.

You have some funnily worried expression on your face, with your eyebrows flying back into your hair. You want to say “Look, I know you’ve been with other men before.” I know, Captain Obvious, but I’m here now. That should tell you something! Why would a girl even argue with you in her underwear? (Because she wants gender equality.)

Does size matter? Yes, it does. Any size matters if you know what to do with it.

I’ll tell you what the problem with the bling penises are- they’re a reasonable size and often well crafted, but the douchebags they’re attached to think that sex HAPPENS to them. So they lie back and show it off. In that case, size doesn’t matter because it’s more unused than it is useless.

Then there are those truly massive ones for which a bottle of lube is a worthy investment. Those penises are even bigger than the said bottle of lube. They’ll also teach you never to walk down that path because you’ll feel mutilated after sex. If that’s not self-harm, then I don’t know what is.

THEN. Then there’s you. You’re the well-balanced guy who’s a great kisser and amazing with your hands. A hot vein pops out from underneath your penis, just the way I like it. Everything is as smooth as scotch until that moment arrives.

You throw everything out of the window at that moment- every little and big thing you’ve ever done to make me happy. When you’re being unnecessarily apologetic about your penis, you’re undervaluing all the great moments that led to now.

Do you really have to destroy all of that on something that doesn’t even matter as much?

Look at me, boy, and repeat after me:

“There are no Orgasms without Foodgasms or Nerdgasms.”

“Sex is a matter of Chemistry.”

“Sex gets better with time.”

Great. Now repeat it five times every morning so you’ll remember forever. And don’t you ever ruin my dating life for the matters of an inch or two. I’m never going to let an inch of skin and tissue change the guy who’s otherwise terrific, attentive, smart, and sincere.

Sex happens in the head, boy. So let me give it to you.

Share this story to save all the shy boys from being their own worst enemies. It's not written in the constitution but there is right to equal pleasure.

I will never quit playing games with your heart (or other parts of your body). Take my great sex advice seriously, for your own good.