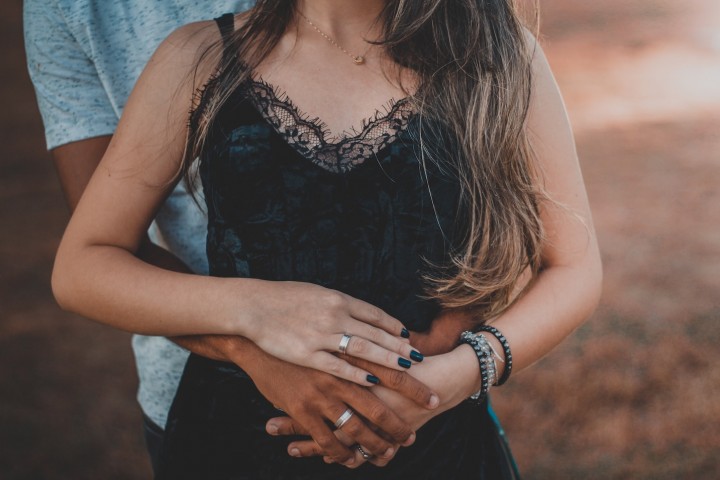 It was a beautiful day. The wind was blowing slightly as the linens were swaying softly. I was sitting in a lounge chair out in the back yard drinking some sweet tea and smelling the different aromas of what my wife was cooking. Since the windows were open, you can imagine the ambiance.

This was to be a great day since we were both off work. We had planned to do nothing and had actually planned this day for a while. Finally a day of rest and relaxing for us.

She steps out onto the back porch and tells me that supper is ready and asks me to grab the linens off the line since they should be dry by now. I said "Sure baby" as I noticed a certain gleam on her face. As if she wasn’t beautiful enough.

In fact, I had noticed today that she was just carrying herself so well and that she was chipper than usual. "Ah, I guess it’s the day off" - I thought to myself.

I grabbed the linens and stepped inside the kitchen. I sat the basket of linens down and then sat down at the table. She already had the table set with some faint music playing in the background and a box fan blowing because we just loved the sound. As we ate dinner, we talked and cut up as usual. Talking about various things. Such as a possibility for some dessert for later, a movie to watch before bed, and so on. She then reminded me about letting her coworker borrow her car for the weekend since hers was torn up.

(I would like to mention here that they carpool because they work at the same place). I tell her that’s fine because my truck still was in the driveway. Moving into the late evening/early night, about 8 o’clock or so, we ate the cherry cobbler she made for dessert and then had our respective showers and then off to bed.

As she gets our movie ready, I’m making the bed shooing the cat out of the bedroom. (He’s very attached to my wife). We lay down, watched the movie. A couple of hours later, we kissed and then get some shut-eye. During the night, I think it was about 2-3 in the morning. I was jolted awake by a burst of thunder just when someone knocked on the front door. Eyes squinting I get up and go to the door. I look through the peephole and see it’s a cop. So I opened the door. As soon as I opened the door, the policeman stepped in. Though I didn’t invite him in, he just stepped in because of the rain I guess. I asked him what was wrong?

He shows me a picture and asked me “Is this your wife?" As I look down at the picture, it’s a woman that looks as if she’s laying on the ground unconscious. I say "Yes!" The cop informs me that she was in a car accident yesterday and didn’t survive. The car was also totaled. And there was another lady in the car as well but she survived. I told the cop that this was impossible because my wife was upstairs in the bed with me and that we spent all day together yesterday.

We both walked upstairs and stepped into my room. She was gone. In fact, her side of the bed seemed to be undisturbed. I screamed at the top of my lungs and felt my chest drop as many emotions just flew out of me. I began to question my sanity as I walked or passed the floor. I walked up to the cop and said, "Take me to her!"

He told me to just calm down as I was sobbing and I honestly believe I felt like I was going insane. He handed me a card with the name and number of the morgue where my wife was at and then he left. I walked over to my love seat, plopped myself on it, and just closed my eyes. I thought to myself that this could not be happening and my mind was still just racing.

Finally, for what seemed like years to me it was 7 o’clock, I looked down at the card, got the address, and left to go see what I didn’t want to. As I was driving, I was thinking about her friend that carpooled with her. I would definitely be talking to her at some point.

I finally arrived at the morgue after about 20 minutes. I rushed to the entrance and went in. Up to the desk, I went and fumbling trying to get my wallet to show the receptionist my ID. She asks me who I was there to see. I said, my wife. I told her my wife’s name, then she led me into the back. We walked over to the area and then the lady opened the drawer. She unzipped the bag and then I collapsed. After a minute, the lady helped me up, and then I looked again and threw up. I told her I had to go. so I left. I just gripped my fist and left.

After I got back home, I laid down then the old cat jumped up in bed with me. I figured I’d let it stay since he was all I had left.

I was up all night thinking of the day my wife and I had spent together. And the ghost. The ghost. She was a ghost. I remember her telling me that we would spend a day off together even if it killed her. I didn’t know she meant it literally. I love you baby, good night my sweetheart.

How A Street Dog Changed My Life Forever