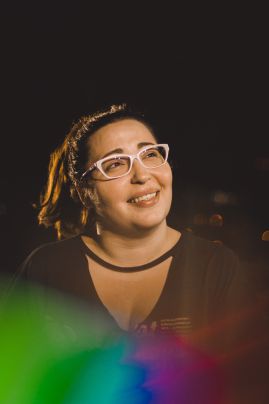 Growing up, I was in a constant state of fear and anxiety. My father was an alcoholic. His parents, who lived with us, were physically and verbally abusive. My mother was working double shifts to try and make enough money to feed her kids. When she would get home, the fights would start. My father would yell. He would smash the pictures on the walls. His parents would start yelling too. My mother would cry, pleading them to stop.

I would hide in my room with my siblings, hoping they would leave my mother alone.

Once my parents got separated, that feeling of fear and anxiety stuck. I was on edge, had frequent mood swings and had an overwhelming feeling of hopelessness. I was the oldest child so, after the separation, I felt like I had to grow up very quickly. I took on the responsibility of caring for my siblings so that my mother could work and make sure we didn’t become homeless. We were living on paycheck to paycheck, trying to do the best we could. I felt under so much pressure at such a young age. I was 12 years old with the responsibilities of an adult. I didn’t have time to play or socialize. I had to help my mom take care of our family. I was constantly upset.

I would find myself crying in the bathroom, trying to hide it from my mother because she already had so much on her plate and I didn’t want to burden her further.

I also had so much fear about what was going on. I felt lost. This fear eventually took away my appetite and I stopped eating. My anxiety grew day by day and I was too afraid to tell anyone. I thought that there was something fundamentally wrong with me. I hid my problems from my friends as well because I was afraid that they would think I was weak or pity me.

I didn’t want anyone to judge me or think of me differently. I was silently suffering.

There was so much going on in my mind and my life, but I had no idea what to do. No one had ever told me what depression was. I didn’t know what mental health meant. I thought that I had a problem. I was never taught to talk about my feelings. In my Punjabi household, feelings were supposed to be private. I thought I was doing this to myself.

I felt an overwhelming sense of guilt, hopelessness and most of all, loneliness.

When I moved away to go to university, my mental health got worse. It was having a huge impact on my day to day life and I was constantly struggling with my thoughts. I couldn’t sleep at night, and then I would skip my classes the next day. I started self-medicating to put myself to sleep and to deal with the constant negative thoughts in my mind. As soon as Friday hit, I would start drinking and would rarely stop until Sunday. I was spiralling. My friends noticed, but I pushed them away.

By this time, I knew that I needed help, but I didn’t want the label of a mental illness. I didn’t want everyone around me to think I was crazy.

One day in the second year, I attended a presentation with a group of students I was working with. The presentation was all about the university experience. The different presenters spoke about how this had been such a great place for them, how they made friends and how this place helped them do amazing things. It made me feel so sad because the university had only made my life worse. Then the final speaker, a young South Asian male, came up. His topic was mental health. He spoke about his own struggles moving away from home and transitioning to university. He spoke about how he too had a downward spiral. Then he spoke about how he got help and that he was alive and thriving.

I was inspired. His presentation gave me hope and the courage to go and seek help for myself. He doesn’t know, but he helped save my life. After the presentation, I went to see a doctor.

The doctor prescribed me medication to help with my anxiety and depression.

Getting better was a journey in itself. It took about 4 months to find a medication that worked for me. The first one had made me feel worse and increased my suicidal thoughts. The second one made me sick to my stomach and I was constantly nauseous. Finally, the third one helped me control my thoughts and feelings.

I started feeling better. I was sleeping normally. I no longer felt the need to self-medicate. I felt that I had recovered. Then I stopped taking my medication. I thought that I was okay now and didn’t need it.

I was fine for a few months, but then the negative thoughts and overwhelming hopelessness came back.

At this point, I knew I couldn’t handle this alone. I reached out to my boyfriend. I told him all about what was going on and he was nothing but supportive. He offered to come with me to see a counsellor. He was there when I went to see the doctor. He helped me along the way.

Once I saw the counsellor, she helped me take a holistic approach to tackle my mental illnesses.

We got my course load reduced so that I was better able to handle my academics. I reached out to my professors who were very willing to help me in any way they could. I went back on my medication and knew that this time, I needed to stick with it.

I was able to open up to my mother as well. She held me as I cried, telling her about how I had struggled, but how I was doing better. She told me that she would always be there for me. I received so much support from my best friends as well. My support system made me feel strong. No one changed around me. No one thought differently of me. In fact, I felt more loved than ever.

I know I was very fortunate for that because the stigma is still such an issue.

I ended up graduating university and getting on the Dean’s List. I found an amazing job that I love. I have come to realize that I am not my mental illness. I do not need to suffer. I have a mental illness, and I am thriving.

There was a lot that stood in the way of me getting help. I was scared of the stigma associated with mental illness. There was also a huge cultural barrier. In Punjabi culture, mental illness is often ignored. I felt so lost and alone. I am so glad that I was able to find help. Now I work to raise awareness about mental health so that no one else feels as if they have to suffer in silence as I did.

I have started a movement called The Mental Health Spotlight where we share stories about mental health, mental illness and self-care from people from the South Asian community.

We hope that by sharing these stories we will normalize the conversation around mental health and help erase some of the stigma associated with seeking help.

That's really a great initiative by the author to spread awareness about the mental issues. As we had celebrated 'World Health Mental Day' last week, there's no better timing than to start talking about our issues now. 'The Mental Health Spotlight' is a step towards opening that door for us. Share this story and let's contribute our part.