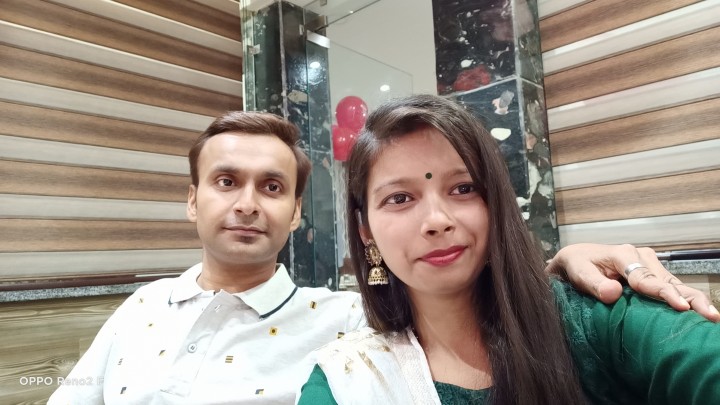 Sourabh was in a wheelchair.

It was then that we interacted, and I got to know that he had cerebral palsy. I never imagined that one meeting would transform our lives. We were talking as if we were old acquaintances.

Speaking to him, I didn't feel like I was talking to some stranger because of his jolly and extroverted nature. He was working as an accountant, and I was pursuing my engineering. So, our conversation was on general topics, but that was all worth the first meeting.

I was surprised to see him full of life despite being specially abled.

His attitude attracted me to him, and we instantly became friends.

In 2018, we were looking for a job. Sourabh was the one who pushed me toward my goal. Ultimately, I bagged a government job, and Sourabh got selected by a reputed bank. It was the moment when we realised that our relationship was more than a friendship. We shared our feelings and decided to marry. Everything was perfect until society stepped in to ruin our lives.

I approached my family, informing them that I loved Sourabh and wanted to marry him.

Not even one person supported me. Everyone said you'll regret it, don't marry him, he's not physically fit, and a slew of other harsh reasons to break our relationship. My family imposed restrictions upon me by stopping me from meeting Sourabh. That was the ugliest phase of my life.

I was living in a joint family, surrounded by hundreds of employees in the office, but still, I felt something was missing from my life. I lost my zeal during that period. To get through that stage, I chose to read novels, but nothing could compensate for his absence in my life. In the year 2020, we tied the knot with each other secretly and returned to our respective homes. Due to the standards society has set for the ideal son-in-law, despite my best efforts to persuade my family, they came up with a myriad of reasons to disagree.

Finally, in the year 2021, I confirmed my relationship as an official in front of my family and told them about our marriage in 2020.

Nobody supported me. Instead, they kept a choice in front of me to choose between Sourabh and them.

Without any hesitation, I proudly said Sourabh and began living with him.

In my opinion, what is the point of education when you can't defend the right thing in society? Society is from us and our views about each other. If we are not making the right choice today, how can we expect our future generations to follow the right path? We hardly see specially-abled people roaming like us on the streets. The cause is society; although individuals have evolved in terms of appearance, their mentality has still not changed. Things are still not normalised for specially-abled people. That is why some people sympathise, and some give nasty looks to them.

I am happy with the choice I made. You cannot love with your whole heart unless you free your mind from certain conditions because if those conditions remain unfulfilled, then the relationship shatters. In our relationship, we support each other in every phase of life. Together, we complete each other. He is always happy with my success and encourages me to do my best. He takes equal responsibility and tries to do as per his capacity. We always make decisions after discussing with each other, whether small or big.

When we talk about women's equal rights, we only talk about the rights. Nobody talks about equal responsibilities.

When I have the right to work like a man, why can't I take responsibility for my family similarly? Nobody from my family has tried contacting me ever since that day. If I had chosen my family over Sourabh, I would have done injustice to society, myself, and Sourabh.

Never fall for materialistic things. Always be humble and, instead of finding someone best for yourselves, be best for someone else.

To The Man In Uniform Who Broke My Heart: I'll Come Out Of This Stronger

I Paid A Huge Price For Bringing In Lesser Dowry