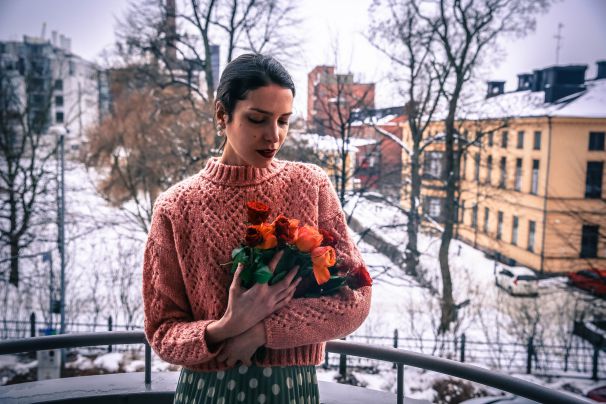 I was doing my second year of hotel management.

I was struggling to come to terms with my first break up. It had happened months ago but I had still not got over it. I had not expected anyone to enter my life at that time.

I was planning an event for our batch. That is when I saw him for the first time. He was my senior. I had never really been very keen on knowing any of my seniors. So I had not noticed him so far.

He helped me fix the menu and even gave me some specific advice. I thought he was a nice guy.

He was a bit drunk but he could handle himself very well and I was okay with that. He then asked me if he could accompany me on my way home. He stayed nearby so I said “Yes.”

That’s when he told me that he had a crush on my batch-mate. He was trying to pursue her but had not been able to approach her so far. I just gave him some ideas and tried to help him out. After that we were just "Hi!" and "Bye!" friends for a year.

He approached me again one fine day after a really long time. We started talking like close friends again. I asked him if he had made any progress with my batch-mate. He told me that he was tired of trying to get her attention. He said he now had no more energy to convince her about his interest. I told him to let her go.

We then started sharing our thoughts with each other and got into the habit of having long late night chats.

He told me about his first relationship and I told him about mine. We realized that both of us had been serious in our relationships but our partners had not been very serious about us.

Both of us were in the same situation now but there was one little difference – he had moved on with his life and I had not yet done so.

We conversed with each other for months and one day he sent me a forward. He asked me to reply to the forward without fail. I did. It was a slam book kind of a forward. There was a question in which he had asked me what I want him to be in my life. I had replied with the word ‘best friend’. I asked him what he had written about me for the same question. And I was taken aback to see his reply.

He had written that he wanted me to be his life partner. He wanted to be my husband and he said I meant everything to him.

I was shocked. I asked him for an explanation. That is when he told me that he had fallen in love with me because of my bindaas nature and tomboyish behaviour.

He said he had fallen in love with me 6-7 months back but had not approached me because he was scared to lose a friend.

I then asked him about my batch-mate. He told me that he had lost interest in her after trying to get her attention for a long time. Yet I could not accept his proposal because I had not yet moved on from my first break up. So it was a big “No” from my side.

He asked me to spend a day with him. He said I could decide whether I wanted to be with him or not after that. That was the day I fell for him. He was very happy about it.

We spent a lot of time together after that. He really went out of the way to erase all the memories of my ex from my mind and heart. He did succeed too. He fulfilled all my little wishes and fantasies. He was working but still, he would find time to meet me.

His best friend was already married. The four of us would roam around together. My parents came to know about our relationship but they approved of it even though we belonged to different castes. He now had to tell his parents about us.

He was taking a really very long time to do so. But I was okay with this because I knew it was difficult for him to tell his parents and then for them to accept me.

We started spending our time together whenever it was possible. His best friend didn’t like it. He thought I was snatching his best friend away from him. So he started fighting with us.

His best friend then clearly told my guy that he didn’t like me.

But we did patch up with one another and then went on to have a nice time together. But we now kept our distance with his best friend because we did not want to ruin our relationship with them.

I too did not want to force them to spend their time with me if they did not really get along with me.

His birthday was just around the corner. I wanted to make it special for him. I knew he had created many wonderful moments in my life which I would always cherish.

I thought it was my turn to return the courtesy now.

All my friends were happy with our relationship and gave us their blessings. They all thought we were a perfect couple. I had planned a day out for us. I knew he would love this.

We had a really nice time together that day and boozed on a little beer that day.

After that, we went to his house. I told his mom that I would get all the stuff to decorate the house. I had invited his best friend too for the birthday. He did come and he could smell the beer on our breath. I then casually told him what we had done the whole day and how we had enjoyed ourselves that day.

I then told his best friend that I had already got a job offer through our campus placement interviews and he too was trying to crack the same interview so that we could stay together even at the workplace. I also told him that his family was unaware of all this.

What happened after that was totally unexpected. His best friend told everything to my guy’s elder sister and mom.

His mom had come to know about our relationship from a third person. So she was very angry with him for not telling her about it. She asked me to get out of the house and I left his house with tears in my eyes. His mom then slapped him a couple of times and asked him to stop meeting me and his other friends after that.

His best friend left after that but told him that he had done all this for his own good.

I still don’t understand the goodness of his act. What good did he do by separating us? Was he happy that we could only see each other from a distance now and not even talk for some time?

What kind of a best friend was he? Is this the kind of loyalty you have for your best friend? He even told his mother that we had boozed before the party. Now his mom is not ready to accept me just because I booze.

I belong to a family which is very broad-minded. I don't feel bad when I booze a little. After that incident, he has been under house arrest. It's been more than a month now. Thankfully his phone is still with him so we can at least chat with each other.

He is irritated by his family’s behaviour. He has been trying to convince his family of our love after that incident.

We are planning to move to another city and work there so that we can stay together.

Only if he is financially independent will he be able to take a stand for me before his family. We also know that we have to give them a little time to think about this again.We are hoping that one day they will realize how deeply we love each other. Hopefully, we will end up together after that.

I pray to every God to set things right in our lives. We don’t want to run away from our house and get settled in our lives. We want to do it with their permission. I too don’t want to take him away from his family and lead a different life somewhere else. I am not that mean. But I hope one day we will be able to spend the rest of our lives together. This is our only wish now.

Let’s share this story and learn not to interfere in the lives of our loved ones. We may stand by them in good and bad times. We may give them unsolicited advice umpteen times in a day too. But we can never ever take their decisions for them. We all have to lead our lives our way. Time and love can melt the hardest of hearts. Let’s prove our worth to ourselves first. The rest will surely fall in place on its own.