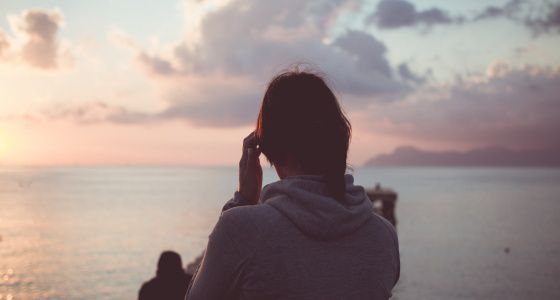 I've lived all my life according to my parents. In fact, I always knew that I would get married to the guy my parents chose for me and so I never got involved with anyone. When I started working though, I saw other people having fun and felt that my life was restricted and dull.

Then, one of my friends got engaged and I went with my other girl friends to attend her wedding. That's where I met him. I remember how I took him to be our driver in that first meeting. Only later did l come to know that he was my friend's cousin. After the wedding, I came across his profile on FaceBook and casually sent him a friend request. He accepted my request and we started talking and flirting with each other. He came to meet all of us, but I couldn't manage to go so he made another plan and asked me once again if I could come this time. We met and I got late in reaching back home. My parents scolded me for it over the phone and I felt like crying right there. Later that night, he told me how he felt guilty and at fault for making me stay out so late and I thought it was sweet of him to care for me like this.

A few days later, he came to meet me again. We went for a drive and that's when he proposed to me. It was the first time a guy was proposing to me. I felt really happy even though I didn't know how to react. Eventually, I turned down his proposal thinking of my parents. But he spent the entire day trying to convince me that I was the one for him and I liked how persistent he was.

Then one day, he called me early in the morning and we talked for two hours straight. He compared me to his mother and told me that he'd look after me all his life and would handle my madness too. I fell for his words and decided that he was the right guy for me. He felt like a ray of hope in my dark life. We met again a couple of times and I started falling in love with him.

He had been home on leave and now went away for work. But even from far away, he replied to all my messages and told me everything that happened in his day. He said that he missed me, that he wanted to listen to my voice and see my face. But as time passed and he became more engrossed in his work, he began to avoid my calls.

He was an army professional and I understand that his work demanded his time, but my heart didn't get it.

My heart just wanted to talk to him and be with him. I started getting insecure. I would constantly ask him if he loved me. Slowly, he got so irritated with all this questioning that he began ignoring my messages. But I still messaged him daily. In fact, I would send him texts to reply to my earlier texts. I would see him commenting on other peoples' pictures on Facebook and not replying to my messages and this would spark my insecurity even more. Then, to provoke him, I told him that I wanted to break up with him.

I wanted to get him to care about me so bad that I was ready to do anything for it. Once, when he was on a trip with his family, I asked him not to play cheap tricks with me and not to call me ever. I knew that he would call me despite my asking him not to. You see, no one in my family had ever tried to make up to me and so I wanted him to do it. He did call me too, but I couldn't pick my phone then. He then texted me saying that he didn't want to stay with such a short tempered girl like me and blocked me.

I cried the whole night thinking that I had lost him. Thankfully though, he answered my call the next morning and I felt super relieved to know that we were still together.

But by this time, my insecurities had reached an all time high because he had threatened to leave me. I did not want to bother him but I couldn't control my thoughts. All day, every day - I just thought about him.

I imagined how our next meeting would be, what gift would I give him, how we'll get married and have kids of our own one day. He was my first thought in the morning and my last thought, before I went to sleep.

Some time after this, he came home from work twice but couldn't meet me either time. It made me grow suspicious. I tried to cut down on calling and texting him, but it didn't have any effect on him.

I couldn't stop my tears and told him that he had given me more pain than anyone else. To this he replied that I should leave him and live my life peacefully, then.

That night we didn't talk and I missed him. I decided to stay with him and give my relationship another try, come what may. I saw him online and texted him the same, but he didn't reply. I continued texting him, asking him if he had read my messages or not. He replied that he wasn't interested anymore. I felt so angry that I texted him that I was no puppet whose feelings he could play with. He started abusing me and I too abused him in return. Then, he called me and said that he didn't want me in his life. After this, when I tried calling him, he didn't take my call. Agitated, I decided to call his ex and tell her about our relationship. This was the final blow to our relationship. When he came to know of this, he told me that he hated me and didn't want to see my face ever again. He felt that I had spoilt his reputation among his friends', by telling his ex about our relationship, because they had common friends.

Since then, he has blocked me. I know he left me because of my own fault.

I know I am short tempered, but didn't he say that he would handle it? Didn't he promise to love me all his life?

The same person who couldn't live without hearing my voice and seeing my face does not want to meet me again.

I know my actions have resulted in this, but I only acted the way I did because I loved him so much. Even if he chooses not to return and my parents get me married off somewhere else, he will remain special to me. No one can take the place he holds in my heart. He was the one who brought light in my dark life and without him, I just feel empty inside. If he chooses to come back to me, I will accept him without any questions. I just hope he doesn't hate me forever. One day I am sure, he will realize how much I truly loved him.