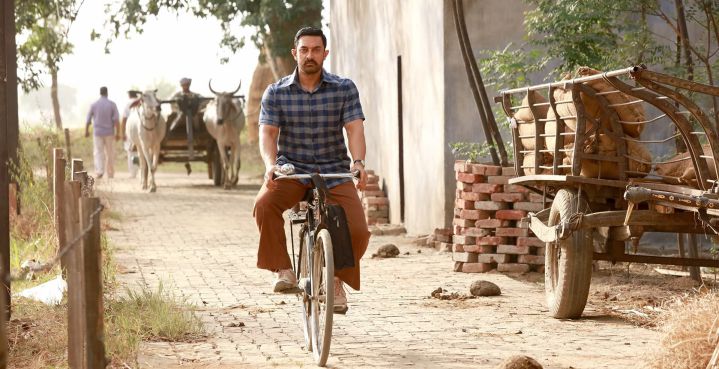 Dangal. A saga in which a mentor discovers his worthy disciple and works towards grooming him with utmost resilience. A story in which the disciple is taken off guards on hearing his mentor’s dreams for him. A story where the world mocks the mentor, once an unprecedented warrior, to be hallucinating over a long dead dream of continuing his legacy. A story of power, faith, and blindfolded trust.

I could soon draw parallels to Master Oogway, who was secretly mocked for his decision to choose a Panda to be The Dragon Warrior. Only he had the power to see the warrior on ‘the inside’ of a Panda, hidden underneath the deceptive exterior.

The difference is that this story was a figment of one’s imagination unlike the cutting edge reality that was Dangal.

Why did it inspire you or me? No points for the ones who came out untouched. God bless you! The exit walk of the entire crowd was so sullen, like they walked with heavy clouds of thoughts over their heads. Some were probably the Oogways in the making, as they murmured, "Dekha beta! You can do it," to their kids.

That's what made me think of what our generation is missing terribly. The rarest of all resources today, is a mentor. If we are not familiar with the road to our dreams, that's it, that's the end to all our dreams. Because we don't have that person in our life, a mentor.

Mentor is the one who pulls a string inside you that'll turn you upside down. The one who ignites the fire and creates a fine balance between your dreams and destiny. I have grown to have heard and witness a lot of inspirational people, the ones who talked of aiming for the stars.

Listening to these people, one could only hope to unleash the best, but not all of them could qualify as mentors. Not all of them had the courage to consider you as a living dream.

A mentor is the one who doesn’t lose interest in you when you commit mistakes. At the same time, he doesn’t sugarcoat or mellow down when telling you your flaws. He has the power to read all of you, even when you are a blank paper to the world. He constantly puts his energy to make you realize and work for what you never thought could be yours. He'll not only ask you to wish for the stars, but he'll also push you to build a stairway. That's a mentor, and that's what's probably missing in our lives. In your life.

So, trust me, we're a generation that missed out on a lot of amazing things. And having a mentor is one of them. I couldn't help but feel the loss as I walked out of the theater after watching the best Bollywood movie of our times. I don't know where we'll be if each one of us had a Mahavir Singh Phogat in our lives. So...

If you’ve never found a mentor, be one; if you’ve found the one, treasure him. But just in case, you’ve lost their grip, chase them, and say, "Sorry!"

A bug bit me and I started writing. Most of what I write is based on observing the world around me.