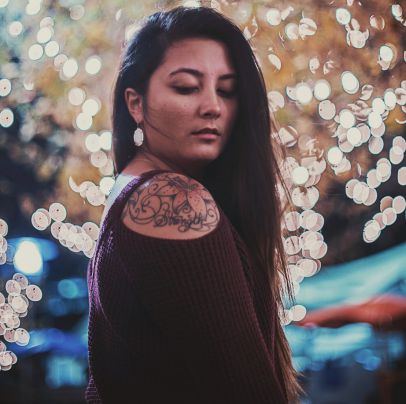 I live in a joint family. We are five children in all. I am the youngest child in my family and so I am everyone’s pet. When I was a child, my life was filled with love and happiness and I enjoyed every second of it. I completed my 12th grade and went on to pursue my degree. When I got admission in a college, I was very excited because some of my close friends too were doing the same course in the same college. On the first day, when I passed through the college gate, I saw a guy.

He was dressed neatly and looked extremely handsome. I turned to take a closer look at him but he disappeared within seconds.

It was the guy I had seen near the gate.

For a second, I felt happy because I thought he was my classmate. That is what everyone else thought too. He looked very young. But instead, he stood in front of the entire class and said, "My name is Xavier ( I have changed his name here). I am your Economics lecturer.”He then said that he was an old student of our college.

Within a few days, he became the favourite teacher of the entire class.

That evening, after reaching home, I couldn’t stop thinking about him. I decided to share my feelings with my friends after a week. I told them that I was attracted to Xavier Sir. They asked me if I loved him. I said, “I don’t know. But I saw him even before entering our classroom and I fell for him immediately.” Two of my friends said I shouldn’t think of him in that way because he was our lecturer.

But one of my friends said that there was nothing wrong about falling in love with someone.

Days passed. I never missed even a single Economics class. All his classes were always interesting.

I did listen to his lectures, but I would also keep admiring him, his smile, his walk, the way he dressed and the way he got mildly angry sometimes. I loved it when he called me by my name.

We sailed through our first year in this manner. The summer holidays were the worst part of my life at that time. I had fallen deeply in love with him. But those two months were like hell for me.

When the college reopened, I felt as if I was the happiest person in the entire universe.

The minute I entered the campus, I went in search of him. I saw him walking out of the staff room so I ran to wish him. He said, Hi! Manasa (I have changed my name here). How was your holiday?”

I said, “It was boring without you and your lectures Sir!” He laughed loudly and walked away. I was smiling and blushing when I entered my second-year classroom.

I was very disappointed to know that he was not going to take Economics for us that year. But I made it a point to speak to him every day. I was in the middle of my second year when I decided to tell him about my feelings. One of my friends encouraged me to do so. I waited for all the students to leave the department. I was waiting for him to come out of the staff room. When he came out, I ran towards him. He said, “What happened Manasa. Why are you running like this? Why are you so nervous?”

I did not have the courage to look at his face. I looked down and said, “Sir, I love you.” He said, “What? Are you out of your senses?”

He just walked away without saying a word. But I didn’t give up.

I reached home and struggled to sleep that entire night. Next day, I waited for him again till late evening. I ran to him. He looked at me and said, “Let’s not talk in college. I will meet you near the juice shop.” Before I could even speak to him he said, “This will not work Manasa. You are my favourite student. That's it. But I will get the biggest black mark in my career if as a lecturer I marry my own student. Also, there is a big age difference between us. This will surely not work out. I want you to concentrate on your studies. Don’t think about anything else.”

He looked straight into my eyes when he said all this.

I said, “Sir, you cannot stop loving me just because I am your student. I will quit my studies for you if it brings us together.”He was very angry when he heard me talk like that.

He said, “Manasa, you are testing my patience. Just throw all this out of your mind. Study well.” He then walked away from there. I was very disappointed when he said this. But I decided not to lose hope.

There was no difference in Xavier Sir’s behaviour even after I proposed to him. He continued to behave very normally with me. I made up my mind to talk to him only after I finished my graduation.  I finished my 2nd year. I then went through two difficult months of summer holidays that year too. I continued to look at him all through my 3rd year too. On the day of our graduation, all the guys of our class gave him a hug. A few girls too did the same thing. I kept looking at this.

I too gave him a hug but I was surprised to see his eyes welling up with tears. I was shocked but he walked away quickly. I too started crying when I saw the tears in his eyes.

We all walked out of the college with a heavy heart. I called him the very next day. The minute he heard my name he said, “Don’t think about anything until you finish your studies. I got a lot of confidence when I heard him talk to me like that. I prepared well for my exams. After I finished writing my last exam, I called him on his cell phone and said, “Sir, can we meet once?” He agreed. We met in the same juice shop. I proposed to him again. He said, “Manasa, you are a beautiful young girl. You have so much to see in your life. I accept the fact that I like you. But I can’t marry you because you are my student. My marriage has already been finalized with someone else.” I was heartbroken to hear this. Tears rolled down my cheeks.

He then said, “Now get up. Forget everything and go home.”I did not say anything. He said, “Fine. I will leave now.”He got up and started walking ahead. He took two steps, stopped and turned back to look at me. He then said, “Sorry.” I looked at his face. I was shocked to see tears in his eyes again but he walked out from there.

I stopped contacting him after that. But I always wanted to know more about him. A few years later I came to know that he was happily married now and had two kids too. It’s been more than 12 years now since I completed my graduation.

I am 33 years now. I am the last child in my family and all my family members are pressurizing me to get married but I just can’t forget my sir. I kept postponing my marriage but I cannot put it off any longer. My friends are asking me to get married at least for the sake of my family's happiness. So I finally agreed to get married. I was not very interested in it though. So my family finalized an alliance for me. We got engaged a month back.

But two weeks after I got engaged, I got to know that Xavier Sir’s wife had died of cancer. I was saddened to the core. I was very confused now. I think God has given me a second chance now. I want to be his wife. I would love to be a mother to his kids. That would be better than marrying someone for whom I have no feelings.

I don't know what to do. I need your help. I am thinking of breaking my engagement and then talking to Xavier Sir. I feel he loved me even at that time. I think the only reason he avoided me was that I was his student. So many years have passed now. I wish he accepts me at least now.

Time is a beautiful concept that touches our lives in different ways. It may heal us and force us to move on with our lives. But if we try to go back in time, we will often find that the ‘magic’ is gone. People change with time. Situations change with time. We outgrow our love for others too. Do share this story if you too feel that sometimes we may end up hurting ourselves and others too by revisiting the past.