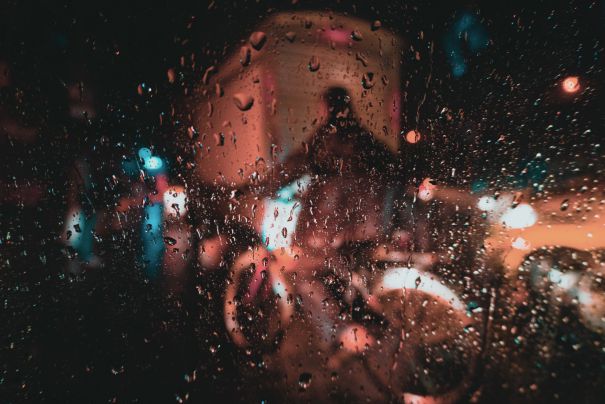 Monsoon Romance. Nothing can be more romantic than a drive on a rainy day, everything looks so beautiful.

Imagine driving slowly on the highway, Mohammad Rafi singing on the radio, raindrops falling on your car and stopping in the middle of nowhere to sip on your hot masala tea. All with your better half sitting right beside you.

Blissful isn’t it? So, when hubs arrived home early in the evening yesterday, I suggested a long drive to our farmhouse. He looked horrified at the prospect of driving so far in the rains. He'd had a bad day and was tired. But no, I was not going to let go of the chance at my moment of romance with my husband. Nope, nada.

Obviously, we set off in the rains then. At every pothole he would swear, and believe me there were many, but that didn’t deter me from enjoying my drive with him. I turned on the radio but the traffic and the honking made it barely audible. Hubs was getting irritated, negotiating the puddles and the metro construction all around.

I felt all this mess was literally spilling water on my plans.

I tried to distract him by asking him about his day, however, that seemed to anger him further. So, I stopped.

Just then, a car suddenly came from the right and swished past us splashing muddy water on our windscreen. Hubs swore at him furiously while applying the brakes. Hastily, I asked him if he could think of any shayari on the rains.

I turned up the volume of the radio. Gradually, we were out in the open and everything seemed so be lush green with droplets falling all around. The music also started cooperating with nature. One after another it belted out great numbers. I began humming along with the song Rimjhim gire saawan. It felt like heaven. He smiled tenderly when I cozied up to him. It was such a glorious feeling looking at the clouds. We stopped at a small stall to have bhutta. He opened up about his day, which was not good. The deal he had been working on for days didn’t come through.

We laughed uproariously when I reminded him of his first disastrous deal. We drove ahead. Further on there was a roadblock and we were told to turn around since a massive tree had fallen across the road. We headed home.

I felt very bad for making him drive in this weather and with a twinkle in his eyes he said, "It was more than worth it."

How else would he get to hear me sing so beautifully and happily? Gosh, he is generally so frugal with his compliments, is he getting dotty in his midlife? Or did the rains do this to him? It made my day and I am definitely not going to analyze it.

I had an adventure designed for pure romance. Intimacy and monsoons are made for each other.

As someone wish has very rightly said, "Some people feel the rain, others just get wet."

This story made my day! In the hustle and bustle of the city, we often forget to notice the little things that make life beautiful and worth living.

Read and share this story with your loved one to give them a hint to spark the romance immediately.

An avid reader and impulsive writer, wikipedia on Bollywood, dabble in shero-shairi. I’m short but you can’t tell because I’m loud!