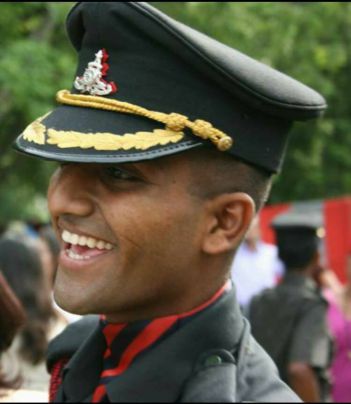 "Let's just finish it once and for all!"

"All we need is to lock horns, fair and square."

I have been hearing these statements everyday these days and it only reminds me of the darkest time of my life.

Many many years ago, I remember walking down a road, in my school uniform, back to my house when two guys passed me by, on a bike, and whistled at me! It was a hot sunny day, my bag was heavy, my shirt was sticking to my back because of the humidity and the walk in itself was a task. Then suddenly, out of nowhere, a good distance away from my house, I was eve-teased, in the middle of the road with no other person in sight.

My first reaction was 'Had daddy been here, these guys will be running for cover!' But he wasn’t and he was never coming back to protect me.

He was long gone while protecting many many others around me. All of us, the people of this nation, including the two men who just rode past me, making all my insecurities come alive and raw in less than 30 seconds.

I can’t count the number of times in the initial days I forgot for a fleeting second that he’s no more and felt extremely helpless in the next. I can’t count the number of dreams I had where I saw him come back to us and woke up with a jolt, only to realise that it was just a dream and the reality was still the nightmare that we were living everyday. Waking up from those dreams used to make me want to scream and cry my heart out but that’s the last thing I wanted to do in front of my mother. So, I would run to the washroom and sit in a corner and press my palms against my mouth to keep quiet and cry till my eyes were devoid of tears.

I will never forget the day I was in the middle of a discussion with a classmate from school, a girl, and the topic of discussion was how or why girls were not allowed to light the pyre of their fathers. To this my classmate said, “Come what may, whenever it happens, I am going to make sure it is me who does it, I won’t allow anyone else to do that” and in the same breath I agreed with her completely and said, “Absolutely ya! Me too!”.

The minute I said it, her face went white and she stared at me and for a good ten seconds, I couldn’t understand why she suddenly shut up. Just then, I saw her eyes and realised why. I had seen this look in many eyes before, in the past. It was the “I am so sorry for your loss” look, because it had already happened with my father. His pyre was lit 7 months ago and for just a few seconds, I had forgotten about it.

Once the Kargil war was over and people had come back, we had many visitors — my father’s friends, fellow officers, other soldiers, who would come to see us. Most of them would talk about how brave he was during the war. I know they did that mostly to make us feel better but I could not help but think that all of these people came back and my daddy had been left behind.

I would often ask myself — Why did our lives have to change like this when everyone else’s was perfect?

Whenever anyone other than my mom would scold me; my teacher, an elder cousin or just some well meaning adult, I would talk to daddy in my heart and say, “See daddy, every one just scolds me now because now they know you are not there to stop them or defend me”.

He always always did that. He always defended me, he even wrote letters to my mother saying the same things. Now that I am older and understand better, I do realise that I was an irritating adolescent and so the scoldings were justified but my father would defend me every single time, still. I had nobody’s hand to hold anymore, when I needed it the most.

As a kid, I would never mention about his death till someone asked me specifically. So, if someone would say, “Beta what does your papa do?”. Or “Which regiment is your father in?” I would answer with a quick, hurried ‘was’ in between.

So, the answer would be, “He was in the army”.. the ‘was’ almost inaudible and only if someone would get as specific as where he is now, would I be forced to speak of his death. I did that, because I hated the look of sympathy on their faces, or I didn't know how to react to the “I am so sorry”. I know that they meant well and their intentions were never wrong but for some inexplicable reason, I hated it.

I don't know how many years passed before the feeling of pride took over every other feeling that we had harboured for so long. I just know it took really long, long enough to not notice when my mother's hair turned grey and when she went from 50 kgs to 100 kgs.

Life was hard, very very hard. Our struggles used to begin from the minute we woke up to the time we slept and sometimes continued through our nightmares. On some days I fail to understand how I pulled through. I feel like I just gave up so many times, so how in the world did I manage to pull through? I was just not prepared, none of us were.

When the battle on the field was over, ours had just begun.

A part of the struggle, will live on till the last day.

When I hear about all these talks about the ‘need’ for a war, the ‘need’ for revenge, all I can think of is yet another teenager, who doesn't even know it yet, but who will have to face the struggles off the battlefield once her father finishes with his on it!

Let’s face the hard and unfortunate fact that the real people who ‘pay the price’ of war.. the ones who bear the brunt of it are these people, the ones who are left waiting. While rest of the country gets up and moves on, it is these people who are left standing alone at the start of their ‘wars’ for life and while in the conflict on the battlefield, one fights with arms and comrades in arms, more often than not, their battles are fought alone.

Fathers are the best, aren't they? This June 21st, share your love for your dad with the world with #myfathermyhero, right here, right now.

Doctor by profession, writer at heart! My thoughts evolve constantly and I welcome the change they bring.

How Moving Back To A Small Town Enriched My Life, Again