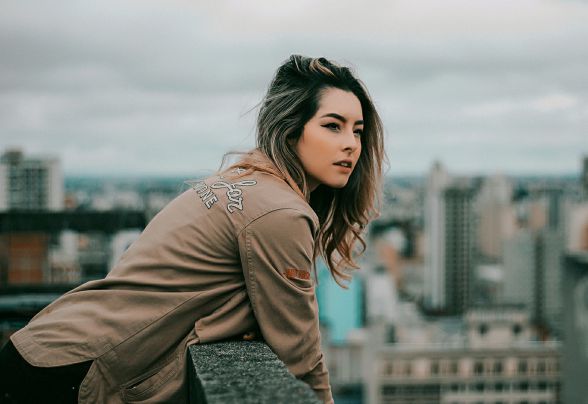 I hope you remember that cheerful girl who lived every second of her life to the fullest. Her smile alone could take away all the sorrows that dared to come around her. She was the girl who loved you more than she loved herself; the girl who made you her entire world despite knowing that she was just another contact on your phone. The girl who texted you whenever you got tired of your busy life.

Maybe she was good for your ego. Maybe you liked knowing that someone was always available to answer your calls regardless of the time or the situation. Maybe you liked seeing someone who worked so hard to get your attention and love.

She is standing amidst a sea of ‘maybes’ right now and is drowning in her own thoughts. She is also questioning her own identity. She knows that she alone is to be blamed for this predicament of hers because she decided to continue swimming despite hearing the forecast of the impending storm. Her only mistake was that she considered you to be her lifeguard. Maybe you could call her insane for what she was doing. Her friends shouted at her and said, "Are you blind? Can't you see what he is doing to you? He doesn't love you and never will."

Little did they know that she was not blind to any of this. In reality, she was a coward. She was too cowardly to accept her mistake.

When you entered her life, you promised her that you would always be there to help her. Slowly she started believing that you were her saviour. She told you her darkest secrets and showed you her deepest wounds. She told you that she was getting addicted to you, your presence, your company and your words. She trusted you and trusted life itself. You remained at the top of her chat list. From sweet morning messages to good night texts, you shared every tiny detail of your day with her. You discussed new songs with her and talked about the lyrics that you loved the most. You exchanged sweet nothings with her throughout the day and night.

She let you into her heart by allowing you to hold her hand. She did not even realize that you were slowly becoming her life.

You shouldn’t have made her fall for you when you knew that you wouldn’t be around to catch her when she fell. She tried her best not to fall for you but her destiny made her do exactly that.

You always said the right thing at the right time. One fine day she realized that you were the person she always wanted to be with. When she realized this she did not know that she had put herself on a self-destructive mode.

Soon you started changing. She stood there puzzled by your behaviour. Your long texts became shorter by the second. Everything that you previously admired about her irritated the hell out of you now. You did not have time for her anymore. She started blaming herself and wondered if she had done something wrong.

She kept waiting to hear from you. But you were too busy to hear her break down on the phone. She kept losing herself every time you chose not to answer her call, ignored her messages or chose someone else over her. You chose to carry on with your plans because she was always available.

She fought with people who dared to say anything bad about you. She kept losing her friends and kept defending you just to be called a ‘fool’ at the end of it all.

Today, she is feeling sick and is really tired - tired of finding reasons to just stay with you. You made her believe that she could be ‘someone’s sometimes’ but could never be ‘someone’s forever.’

The journey of loving you had never been easy for her. She kept giving up on her self-respect because you were too stubborn to let go of your ego.

Finally, the day arrived when her biggest fears turned into reality. You said, "It's my mistake. I am sorry." You know what? A soul died that day. Those six words of yours were enough to tear her apart into a thousand pieces. What could be worse than being called your lover’s mistake? How would you feel when you realize that the best thing that ever happened to you is feeling guilty for you?

She still wonders if it would have hurt her less if you had just left without naming her pure love as an unforgivable sin of yours.

Every night, she cries herself to sleep because she wants to figure out what went wrong. She still blames herself for everything. She screams and wants to know why she isn’t good enough for you. She shouts out your name loudly but you are nowhere to be seen. She loved you. She still does to the moon and back. But even she does not know what to do now. She only knows that she will remain yours until her last breath.

Love means physical, mental and emotional involvement. Sometimes we get carried away by just one aspect of our relationship only to realize that we ended up hurting the person we thought we loved. Let’s share this girl’s touching story so that we all learn to think before saying, ‘I love you.’

LIFE IN THE TIMES OF CORONA
Your Stories
YOUR STORY
demo
POEM
BAKKAR. CHAI. SUTTA