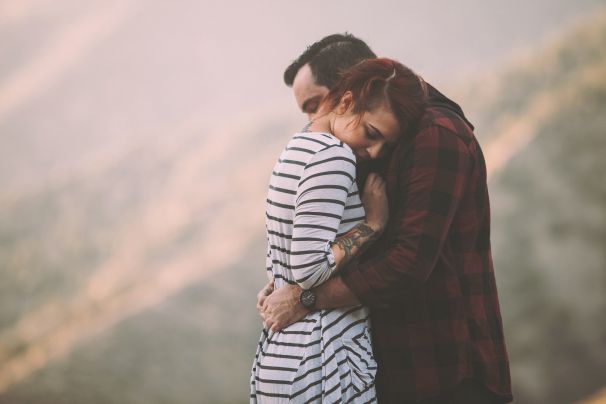 We all will always face several ups and downs in our lives. But only a few of us have partners like mine who help us when we have tough times.

It all started 9 years ago when we were fresh graduates. We had just finished our college life. We met at a common friend's party. We clicked instantly and were dating within a month and a half of meeting each other. We did have our share of tough times. Initially, we were living in the same city for 2 years. Then we were in a long distance relationship because we lived on two different continents. This took a toll on our relationship but we survived with a fairly smooth run.

After being with each other for 7 years, we decided to tie the knot. We finally started living together so that we could enjoy each other’s company. Our parents were very supportive of this and knew about our relationship right from the start. When the time came, they got us married.

It was during the wedding preparations and at the actual wedding itself that we saw the other side of his parents.

I had lost my father to cancer a few years ago. And now my mother alone had to take care of the whole wedding. My in-laws took this as a golden opportunity to milk the cow dry. They started demanding that we have 2 weddings because I was a Sikh and my husband was a Hindu. They were not going to host any reception so we had to entertain all their guests at the wedding. I had to buy all the furniture for my room though my husband lived in another country and I would move in with him there.

My mom-in-law could not bear the fact that the spotlight was on us during the wedding.

So she faked a fracture when the vidai was going on so that everyone would give her all the attention that she was craving for. We had to wait for 4 hours till she came back from the hospital with all the reports which said that she was perfectly fine.

As I got to know his family and friends, I was doubtful and wondered if my husband would take a stand when such things happened.

But he proved everyone one wrong and took charge of as many things as he could.

He took up the responsibility of hosting the engagement ceremony so that my mother did not have to host an additional party. He asked his parents to put an end to all their demands because he was capable enough of providing me with the basic necessities.

He held my hand throughout this phase and assured me that he would take care of everything.

After the wedding, however, my visa got rejected due to some counsellor related issues and I had to stay back in India with his family while he was away in another country. I tried to adjust according to the schedule of their household but my mom-in-law made it a point to make my life miserable.

She would not let me step into the kitchen because it was her territory. I could not go out of the house because she believed in a weird concept that girls got raped if they stepped out of their homes after 7 p.m. She would get jealous of me if she ever saw me talking over Skype with my husband.

So much so that she started sleeping with me in my room to prevent me from talking over Skype with my husband late at night. She would reset my almirah and change the setting of my room according to her preferences. She even called me the dark spot on her moon-like son stating that this is what she got to hear from her relatives at our wedding.

In the beginning, my husband thought that I might be facing adjustment issues. He knew that girls usually faced such things in their new homes. He thought that it was a little tougher on me because he was not around to help me settle down in the new environment.

He asked me to be patient and give myself some more time till things settled down. He made it a point to visit me every 4 months and would fly all the way from Canada to India just to spend some time with me. He would wipe out all his savings to do this for me.

It was during his first visit back home that he actually saw how bad things were. He asked me to stay at my mom's place more than my in-laws' place but my in-laws would always find some reason or the other to call me back.

Then one fine day my mom-in-law broke all the boundaries and started abusing me of b***hing about her to my father-in-law. This was a baseless allegation and I was physically abused for this. My mom-in-law threw huge tantrums. Only a person who was insane would have done such things.

That day my husband took an extreme step. He asked me to pack my bags and move to my mom’s place.

He asked me to stay there till my visa formalities were processed. My in-laws made a huge deal about the whole episode but my husband never paid any heed to what they said and made sure that I was safe and living peacefully.

I suffered from depression due to all this and had to undergo therapy as well. But my husband and mother stood by me like rock-solid pillars of strength. My husband kept visiting me regularly till my visa got approved.

I finally got my visa after 2 years of being married and moved in with my husband. Life is no less than a beautiful dream for me now. I ensure that my relationship with my in-laws is as cordial as possible despite going through such experiences.

My husband really appreciates my efforts.

We did have a rough patch just in the beginning of our married life but I believe that this phase has made us stronger as a couple.

After facing all this together - we believe in each other a lot more now. It is actually true – no problem is too big to deal with if you have a loving partner to share and solve it with.

Tough times are transient. But it also cements bonds of love. Tough times are tough to face. But we also get to know the true worth of the people we truly love and care for. Tough times remain etched in our memories forever but they also make us appreciate what our partners are doing for us. Do share this beautiful young woman's story if you too feel that this is what love and marriage actually mean.