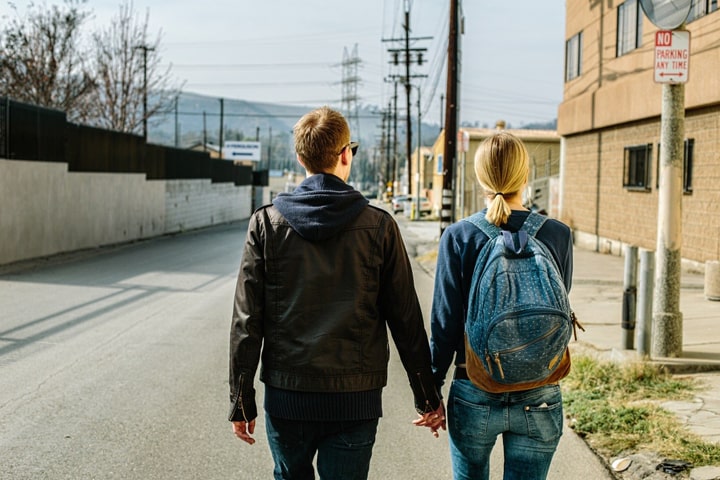 I never thought I'll be sharing this with everybody, but here I am, with a small white page deep in the black wail of ink.

This is the tragedy of how I fell for the wrong person. I was a fairly happy girl, who loved to laugh and also make mistakes. I’ve learnt a lot from my mistakes though not always too early. That’s why many a times mean people took the advantage of it and my mother was insecure about this all my teenage life. Like every other teenage girl, my life was also screwed and messed up. There were people I hated who I had to see and tolerate every day.

There was one line that all our seniors used to tell us all the time, that there’s no such thing as love. It’s all infatuation and it comes and goes away from our lives, sometimes leaving you with a little bit of sorrow. Like any other teenager I was an obsessive romantic and true love stories moved me a lot.

Little did I know that I would have to do whatever it takes to turn a beast into a human being with a golden heart, and that made him fall for me even more each time.

It was summer and this boy, who was also my age came up to me with his silly jokes that filled me up with laughter. For the first few months he treated me like a “madam”. He used to tease me a lot and gave me that look that every girl desires from a boy, well so I thought after watching the “Twilight saga”.  I indirectly gave him hints of what kind of a boy I wanted in life by writing a diary entry everyday on my system and saving it in pen drives, which he would ask from me for either some project or to share some data. My plan was to make him understand what I wanted in a guy and how happy I was to have him as my “forever and after”.

The pen drives that had my diary entries then gave him a chance to know more about me and my type, this backfired because he understood me too well and it was easier for him to catch me in his well planned trap. Those two and a half years of our relationship was as if I was his slave and he was the king. He made me do everything, from his homework to his projects, but what did I ask for in return? Nothing just a kiss, he very well knew that a simple kiss would be enough. He was a terrible human being and would always insult me in front of my friends saying that I am not good looking. He also physically tortured me, he’d hit me in front of my classmates and later would come apologize, and with just a little bit of hanky panky I’d forgive him. Though it was his fault always, he would some how turn the tables and make me feel guilty of not understanding him and in the end I used to end up apologizing and  begging for him to smile.

He also tortured me mentally, he knew I wasn’t strong enough to live without him and he’d say that he’d leave me. I cried for five months continuously because he wouldn’t stay besides me either in class or when we would hang out with friends. He stopped holding my hands and he wouldn’t dance with me either, when every other couple did. We did kiss yes, but only during the initial months, also in which he was rude most of the times, he used to say things like “I don’t care”. He didn’t put it up on Facebook that we were dating because he’d say that he had family on it.

He’d always spend his time with a group of girls. One of whom was his best friend and he was like her pet dog. Whatever she’d say would be his command and he’d obey it. He’d spend hours at her place and would explain it to me saying that they are like brother and sister.

I was so madly in love with him that I used to blame the girl that she was stealing away my future hubby from me.

With time he became the worst person, almost like a monster, and made me cry again for the last three months of our relationship. He stopped talking to me, he wouldn’t even look in my direction. He didn’t come visit me even when I was feeling very low and sad, even when he knew that only he could bring my smile back. By that time everyone knew I was his puppet and he took a great deal advantage of me. Yes he did get physical as well and I’m very ashamed of it. I felt like killing myself for being so foolish and that I let him touch me. Of everything I hate my body the most because I let him touch it. He blocked me of off Facebook and Whats app, and every other social media  possible, through which we could connect.

I had been a bad daughter and a bad friend because of him. I now realize that when our teachers and elders tell us things, we should listen to them without any questions because they have far more experience than we do. Just because of social media and the term “couple goals” we ruin other important relationships.