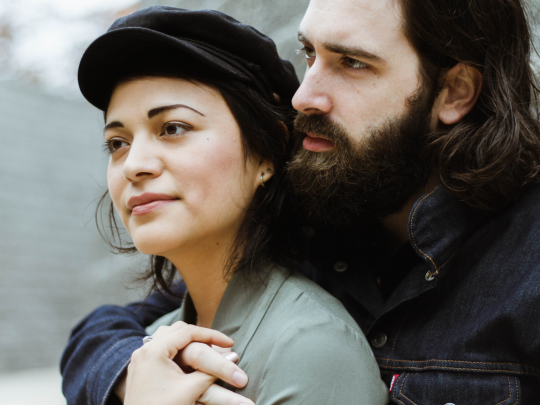 I was 21 when I got married according to rituals. It was a thorough Indian arranged marriage. Before getting married, I spoke to my husband a lot over the phone but I could never connect with him. He was silent and he seemed to be a shy guy.

I was never interested in being married, per se, but my parents' happiness was always my top priority. So I got married to that guy despite knowing that he was really the shy type.

He doesn't even speak to me unless he's spoken to, and he's maintained a stellar level of humility. He is not only humble, but he also takes care of me a lot. He's constantly concerned about my needs, even if they're as simple as me eating my meals on time.

His love is not always visible, but it's a huge constant in my life. I can feel it around me all the time. We live in another city, and when he goes to work, I'm alone at home. So when I said that I wanted to pursue higher education, he was completely supportive, and I even got my father on board.

Before I could put my career plan in place, I discovered that I was pregnant and we accepted it. Two years went by with me dealing with my pregnancy and my child's birth. But now, we barely talk to each other. Our main focus is our child. We were becoming distant and we were losing our connection. The love I could feel all the time was no longer there.

In the middle of all this, I made friends with a guy on a social networking site. We began by introducing ourselves to each other and I realized that he was just a lonely soul, looking for a friend. I was also frustrated in my life and I desperately needed someone to talk to.

We began to really understand each other. Then I realized that he was beginning to develop feelings for me, but I kept ignoring it. But one day, I had to accept what was going on between us.

We knew that both of us were married and we both knew our limits. But he ensured that I always knew how special I was for him.

One day, I wanted to meet him face to face. And on the very same day, he booked his flight tickets to come and see me. I was both excited and nervous.

When I met him, I could see for the first time that this was the man who made me feel so special. And when he met me, he held my hand and asked me to be his lady love again. I couldn't control my emotions- there were tears in my eyes and I hugged him tightly. We were so close that we could feel each others' heartbeats.

We had lunch and then it was time to say goodbye. It was the most difficult thing I've had to do. He kissed me on my forehead and we were waving at each other until his cab got out of sight. Even as he disappeared, his love remained in me.

We still keep in touch. I know how much he means to me. And he makes me feel like I am truly loved, and not alone. But we also know our boundaries. We have our own families, but we still complete each other. We look for each other no matter where we go.

I don't know if what I'm doing is right or wrong, but I'm living a life for myself without ruining it for the others.

Share this story even if it isn't ideal. Everybody is happy and nobody is hurt. That's all that matters.