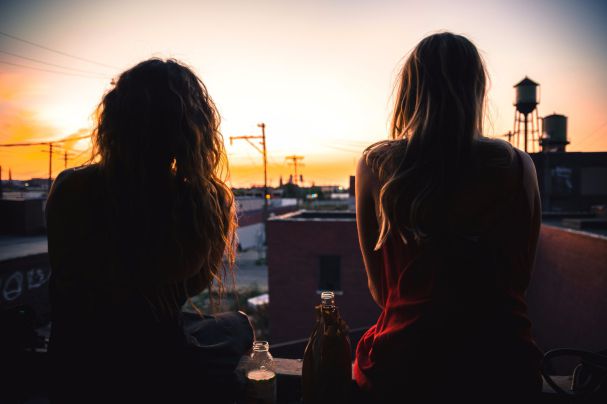 My name is Soumya. I am an ordinary girl from an orthodox family. As a little child, I was fascinated by the corporate culture of an MNC and wanted to grow up to be a part of it. Years later, when I started working at one such company, I met Manya. She was a good-looking, fashionable and independent girl. In fact, we first met at our job interview. Incidentally, both of us were selected for the job and we were trained in it, together.

I had never expected that she would become so important in my life.

Soon, we came close and I started considering her as my best friend. Two years passed like a dream with her. My colleagues were surprised at our friendship because we were both quite different from each other. While I was funny, down-to-earth and outspoken, Manya was emotional but very sure of herself. She didn't waste time worrying over her actions, even if they hurt someone. We could talk to each other for hours over the phone and often used to stay back after work hours just to spend time with each other.

To be honest, some people even mistook us to be lesbians, because they couldn't understand this strange bond between us.

Due to her family situation, Manya had to move to a different state. We didn't want to leave each other so we somehow convinced my family to let me move with her. She assured me and my family that she would take care of me. We both got jobs in the same company once again. But this time, we were working in different departments. I was supposed to move a month later. I was so happy that we would be together for at least a year, again. However, things changed.

She asked me not to come. She said the 'situation' wasn't right. I didn't understand what she meant by it. Soon after, she told me that she couldn't take care of me and that I shouldn't blame her for it. She did everything she could to encourage me from not coming. But I had already convinced my parents and I couldn't go back on my decision of moving, now. I came and managed to settle in a new state, with a few other friends that I had earlier ignored because of Manya.

Months passed by like this. Then one day, Manya called and apologized to me. I accepted her back in my life. I guess I still cared about her and it blindfolded me to her faults and flaws, once again. We were back together until I came to know that she had many secrets and had also done many things that I didn't know about. When I asked her about them, she said that she didn't tell me about them because she didn't want to lose me. I believed her. But some days later, something happened that I didn't support her in, because I didn't think she was right. She got so angry over it that she started complaining that I was interfering in her personal matters and I should leave her alone. I was so surprised to hear her say this. I thought there was nothing between us that we couldn't share with each other, but I guess I was wrong.

After this episode, she tried to put me down in front of my family too. After a while, I couldn't take it anymore, so I decided to shut her out of my life. I am glad that my family supported me through this episode. I learnt a very important lesson - family is everything.

But, I am scared that if she tries to get back with me again, I might forgive her, because deep down I know I have a soft corner for her in my heart and will always care about her.