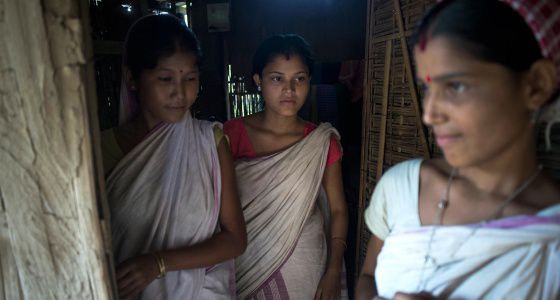 I am a Tribal Rights Activist, Disaster and Trauma Counsellor and Sustainable Menstrual Champion. These might seem big words to you but for me its my life and purpose in a nutshell.

I grew up in a small town in Assam dominated by the tribal community. I was always fascinated by the tribal way of life, their simplicity and culture. But things changed, while at quite a young age, my father was kidnapped by the militants and tortured for days. They called up his business associate for ransom, but he remained strong through the entire ordeal. One day, when it was raining heavily, the militants got drunk and my father slipped away. He ran 50 km to the nearest railway station and came back home, but the trauma was quite severe. He suffered multiple cardiac arrests; he underwent major surgeries to survive but he isn’t the same now.

A man does many things to survive in his life. But I can't get over my admiration for what my father did. I can't imagine his ordeal and what he had to go through physically and psychologically. However, it didn't stop him from making sure that today, we still have a chance at being a happy family together. Dad refused to be a victim, and that's my biggest gift.

I went through a lot but to make sure no one else suffers the way I did, I took matters in my hand. I refused to be a victim too. Instead of blaming them, I started rehabilitating the one’s who had turned to militancy. I started working with them to change their mindset and the whole livelihood structure of tribal people. What I believe, is that the lack of education, proper employment and poverty are the main reasons these tribal people resort to unconstitutional activities. Given that most of the tribal belts are situated by the borders, the external forces with malicious intents seep in quite easily.

In between this tryst, I completed my studies in criminal psychology from Kolkata University, and also did a number of courses on Rehabilitation Programs from Amity & IGNOU as well, and continued counselling the tribal communities absolutely for free. I fell in love with a guy I met in a Yahoo! chat room who now happens to be my husband, Abhishek. I moved to Hubballi (Hubli), Karnataka with him but the purpose of my life didn’t move. With the support of my loving husband, I kept on working to uplift the tribal of North-East India. On the contrary, I started extending a helping hand to the Kunbis and Siddhis, tribal community from the Uttara Kannada district in Karnataka, as well.

Even when militants surrender, the stigma persists. If they don’t get proper jobs, they eventually go back to militancy. People were very sceptical of my intent and kept questioning whether it would work and whether my past experience will come in the way. Only when we understand that no human is a born criminal, we can be more rational in our approach towards them. I’ve been advocating this for some time now. Unfortunately, because most of us are quite unaware of the hideous existence of this brutality, the human approach goes missing. Abhishek constantly reminds me, "If there is love around, people will always change, keep on trying, if there is consistency in what you do, it will work."

Despite the endurance and resilience I possess, tragedy struck me in 2014, when I was shot by militants, in the knee and shoulder, and thrown into the forest to die. I was lying unconscious in the forest, before being rescued by the Army. The same people, ironically, have now realised my unwavering belief and dedication to bring change and call me ‘Maa’. Rehabilitation is a very difficult task. I have seen what it takes to change people who have been brainwashed to follow a certain path.

I moved ahead and built a school with a community hall, changing room and toilet blocks in the Karbi village. The community hall is used as a meeting place for people to speak up, seek help and celebrate their culture. I have, during the course of my work, reached over 20,000 tribal women across India with the Sustainable Menstrual Program and taught them to prepare biodegradable pads (the patent of which is in my name) free of cost so that it would provide some kind of regular and reliable income for the distressed tribal women. I, with my husband, then culminated my work under a non-profit which we named Saksham Foundation.

To keep the women occupied during this pandemic, I converted the pad units into mask producing units. They have already produced and distributed 30,000 masks in the tribal belt. You see, if these tribal people are busy, they have no time to think of anything unproductive. The locals in every village are my biggest volunteers. I hand over the resources to them to be distributed as they deem fit. When cyclone #Amphan rampaged the Sundarbans recently, we were able to distribute groceries to 10,000 people with help from locals.

Speaking of my life, I juggle multiple roles, I’ve never introspected about who I am probably because I’ve found pieces of myself in each tribal person I meet every day. I have been fighting for tribal empowerment for over 18 years now. Life taught me not to restrict myself in a 9 to 5 job and hence I have been working with tribals across India now.

From tragedies and hard work to being awarded the Karamveer Chakra in 2019, I have come a long way. Additionally, I was also awarded with the Kalki Gaurav Samman recently. Lately, I have been conferred upon with Certificates of Appreciation from several humanitarian organisations like Global Human Rights Protection Council and SUFI Humanity Foundation for promoting safety against Covid-19 and social services during the lockdown.

These awards I have received, are not just medals on my uniform. They serve as a reminder to me of the responsibilities I have, which have now increased manifold. The monetary support is quite low and I end up using 95% of my consultancy fee for my cause.

What I believe is determination takes you a long way; people will find ways to discourage you or even stop you but you live your truth and never stop. I would continue to create ripples with my efforts to change and rehabilitate the tribal community till the day I die.

Please share this story because it deserves to be heard. If you want to share your #myfathermyhero story, write to us here.