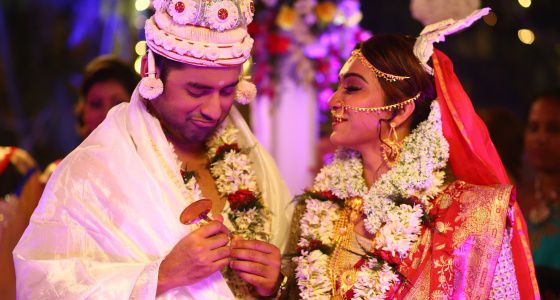 I belonged to a regular Punjabi family in Delhi, where after two years of completing my post graduation, I was asked to settle down. I didn't deny it because I too, felt that getting married at the age of 25 is pretty decent for a girl - well, I'll get some time for myself before the clock starts ticking- you know what I mean?

I was in a relationship back then and my parents were open-minded enough to ask me if I had some guy in my mind. I told them about my boyfriend but somewhere deep inside, even I knew I couldn't fit in at his home and its environment. And my father, being the lovely one he is, did all his research before coming to me and telling me the same thing that there were a lot of differences between our families, and that he wanted me to be treated the same way they have looked after me all my life - like a princess. Frankly, it didn't take much time for him to convince me and I also managed to make my then boyfriend understand the situation. Somewhere, even he knew it was practical enough.

And then started the groom hunting. After almost a year of rejections because of silly reasons like 'she is fat', 'she is living a very lavish life', and so on, I finally met my husband.

He, along with his family, came to our home to meet me after they spoke to my parents and passed the test - and that is a big thing! We hardly talked for 15-20 minutes and they left, as they had a flight to catch. Yes, they came from a different city. A city much smaller than Delhi, Chandigarh to be precise.

I liked the guy, the family, and I said yes after they asked for my answer. But little did I know what the reality was.

I was happy and confused at the same time as everything was happening so fast. We didn't even get to talk to each other before our roka! Not that anyone stopped us, but we just didn't get a chance to exchange numbers. Everything was going smooth; I got busy in wedding shopping and day-dreaming. But one day I got a call, from his girlfriend! Yes, my one-month-old fiancé had a girlfriend! She sent me pictures and screenshots to prove that they were in love and were still together.

She further told me that he was helpless and forced by his parents to get married to a fatso like me. I saw the screenshots where his girlfriend was calling me an elephant and he was laughing at it. It broke my heart. And I didn't know what to do.

I couldn't sleep that night and could only think of my next step - to confront him. I dropped him a text at 2 am to call me as soon as possible. He had no idea what was going on, so he took it casually and was simply talking to me over texts. Then I sent him one of the pictures his girlfriend sent me and then immediately, my phone rang. He tried to pacify me by saying that she was his past and was just jealous of me, that she was after his money, and so on.

I knew he was lying. But still, I pretended to believe him. I thought to myself, if he truly loved her, he would never degrade her like that. Maybe he casually dated her; he will get over her once we get married. I gave him a firm warning that if he still stayed in touch with her, I would go to my parents. Things changed since then. We became more open with each other and the happiness came back again into my life, but one thing was sure that I could not love him easily.

Three months later, we got married and went on our honeymoon. The first two months of marriage were like a dream come true. I was enjoying every bit of attention and affection I was receiving at my new home and from my new family. I felt as if my life was complete. I had everything I wanted, finally.

But when things started to get back to normalcy, I started to feel ignored by my husband. He didn't communicate much with me, I never knew what his plans were. He started coming back late from work and gym. My in-laws started asking me to keep calling him and stay informed about his whereabouts. But I was always the kind of girl who didn't believe in disturbing anyone.

Things went on for a while like this. And then came Valentine’s Week. I didn’t have any expectations because I knew there was no emotional connection between us. But he surprised me! He got me roses for rose day, chocolates for chocolate day, and a pretty pair of earrings for Valentine’s day.

I thought he was back, and that I have my happy life back again. But again, things went downhill. I started to think that these were my mood swings. But everyone started to see the sadness in my eyes and his disinterest towards me.

Him going out on weekends to meet friends but not taking me out alone ever, killed me. It's been 4 months since we got married and I am still hoping that things would get back to as they were. I cry to myself at night at times, wishing if I could just go back to my parents, give them a tight hug and pour my heart out to them.

I don't know if my expectations are too high or if he isn’t emotionally connected to me. I fail to understand the issue and I have left it all to my destiny for now. All I can do is give him some time to get used to the idea of being married and hoping for a happier tomorrow. Yes, I’m just another Indian girl.