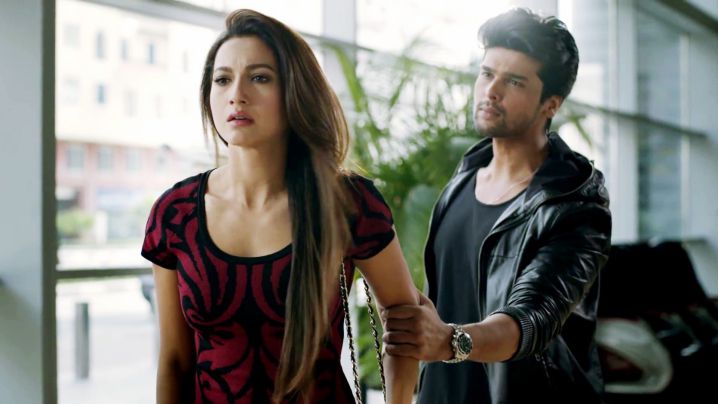 I always wondered about the college life until I joined my college. It was a good place with so many nice people around me. I could cherish a few of them forever. And then there was this guy whom I saw for the first time and instantly fell for him.

Yes, it was love at first sight and I didn't know his name or any other details about him. I just wished for some miracle to happen so I just got to know him. And it did. He was a senior. I had to send a message for a contest and it was his number I sent the message on. I won the contest and came in his contact when he messaged me. There it all started.

Our conversations were limited to WhatsApp and we chatted all day and night long. Whenever we saw each other in college, we would exchange glances, make faces at each other or just flash best of our smiles. These little moments were so special to me.

I'm a person who takes care of every close one of mine. He was special and I took good care of him. He kept saying that he had never seen a girl like me. He would always talk to me in every situation in which he felt low or the times he got stuck in problems. I was a solution to everything in his life.

All these things just made me so happy and I wished he felt the same. We finally went out together in icy cold winter. I remember every single bit of that day.

We started having phone calls that never lasted for a duration of less than 2 hours and at least twice a day. I'd wake him up in the morning as he loved to start his day hearing my voice.

It was when he started ignoring me as time passed and whenever I asked him the problem, he'd just say "you won't be able to understand it, I can't come close to you, I'm getting attached to you." And yes, he dropped a million hints every time we talked.

I liked this feeling when he explained about his fear of losing me. He was afraid of going away from me. Then one fine day, which I now consider to be the worst day of my life, he proposed me. He told me that he liked me. I was so into him that it took no time to tell him that I liked him as well. After two days we were in a committed relationship.

I was so happy. I was happier than I had ever been.

Three days later, he said we were going too fast and we should take time to think it over and just be friends for now. I agreed. But we loved each other, at least I did. And so we couldn't deal with that friendship thing and got committed again. It was when that he again started ignoring my calls and messages and when I questioned him, he said he again feels we should just be friends.

I was hurt, close to being shattered, but he consoled me and made me fall for him all over again.

Life became good, he was with me. He was mine. Then, a week later, he simply texted me saying that we can never be anything more than friends. Sitting on the last seat in my class, I read the message and tears flowed down my eyes. I felt shattered. I tried to recollect every bit of mine and talked to him about it, but in vain.

And there were a number of reasons for the next month. The reasons like- "We don't have a future", "I'll not be able to keep you happy", "I'll leave the college in another year, earlier than you and you'll find someone else then". I tried to convince him every time that nothing of that sort would happen. I truly loved him.

I tried everything to make him realise my worth, from texting him and calling him all day and night to not talking to him for 2 days at all. Nothing helped. He was gone.

And then came another reason that he had a girlfriend already and he loved both of us. He said he wanted a different world in which he was free to love any other girl. Again, this broke me into pieces. I tried a thousand times to go away from him, but I never could, nor did he ever let me do that.

I cried, days and nights, I didn't sleep at all in those days, had no food and life seemed like hell. I met him again one day, when he held my hand and said that he loved me. He changed these words soon and I tried to kill myself, but escaped with a call.

He never left me and maybe this hurt me even more. In fact, he kept saying he loved me even after that. Every bit of me was broken. None of my people knew about all the happenings in my life.

Then one thing after the other trials of convincing him, getting tired of trying to make him understand, I asked him to finally answer me if he really loved me or not. He didn't answer.

I forced him but he didn't. After a few days, I finally decided I'd leave him now. And so I did.

One and a half month had passed by. I’d miss him every day, cry for him. One day, I finally messaged to tell him that I missed him and again asked if we could go back to being what we were. But he didn't talk. The series of crying to sleep every night continued. Sometimes I'd cry so much that I felt choked.

When I came back to college he messaged me asking if we could again be friends like we used to be and unfortunately, I agreed. I was pushing myself to the risk of getting hurt yet again. And this time, not just that he hurt me, he insulted me, abused me. He said, ‘Mujhe koi farkh nahi padta tu jiye ya mare", (It doesn’t matter to me if you’re dead or alive!). It killed me inside.

I felt broken and finally decided never to talk to him again. We don't talk now. I miss him. And I don't get similar feelings for anyone else.

I came to know about his girlfriend, he has got yet another girlfriend in college. I see both of them together almost daily, the girl is little aware of the fact that he is a player and she is just another temporary girlfriend for him and he accepts this among his friends. Yes, he ruined me.

YOURS GEEKLY
The Golden Bird
LIFE IN THE TIMES OF CORONA
BAKKAR. CHAI. SUTTA
HOW'S THE JOSH
DIRTY PICTURE