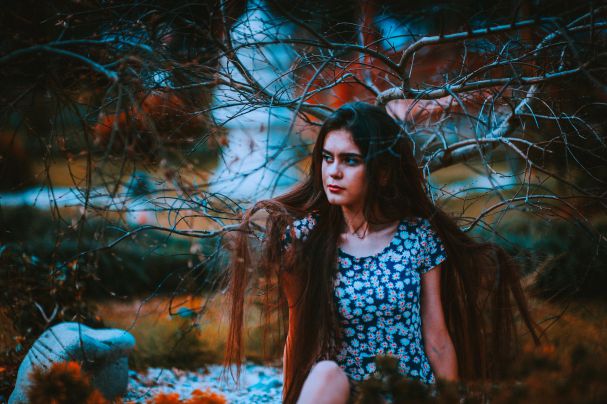 I was a happy, young girl. I was enjoying my life with my family and friends. Like other girls, I too would keep dreaming about my crush.

But one fine day, I had to face the dark truth.

I clearly remember the day I was riding my Scooty. I was 16 years old at that time. My dupatta got entangled in the wheel and I fell on the road. I lost my consciousness. The people around me carried me to the hospital. There was a swelling on my head which hurt a lot. The doctor did not ask me to go in for any kind of scan. She just gave me an ointment and asked me to apply it on the scratches that I had got all over my body. She prescribed a few tablets. My swelling reduced when I took them and I was normal after a while. I forgot all about it after a while.

But I would often get severe headaches every now and then. I did not take them very seriously.

I am now doing my first year of graduation. I have a crush on this guy (let's call him Gowtham) who was in his final year.

He is an extremely handsome guy. I fell for his smartness immediately. Several other girls too had a crush on him. But he didn’t care a damn about anyone. Some girls had even proposed to him but he would always decline their proposal with a smile.

I was his junior. So I didn’t get a chance to talk to him even though I liked him a lot. I decided not to tell him about my feelings because I knew he would say, “No!” to me too. Our exams were approaching. Our study holidays were about to begin.

I knew I would not get a chance to see him again. So I decided to talk to him but I couldn’t find him anywhere. I tried to divert my mind. I did not want to think about him while I was preparing for my exams. On the day I finished my last exam, I came out of the class only to find him sitting with one of his friends.

I was so happy to see him. I badly wanted to speak to him at least once. But now when I finally got a chance to talk to him, I was too scared to do so. I sat opposite to him and pretended to go through the question paper. He came and sat beside me very casually.

He said, “Hi!” I was surprised. My soul was dancing with joy. My entire body was shivering but I managed to say, “Hi!” to him too.

He said, "How was your exam?"I said, "Good." He then said, "Shall we go to the canteen?" I said, "Sure." His friend said, "You guys carry on. I will join you in some time." We did not speak to each other till we settled down in the cafeteria. He said, “Why are you so silent?”I said, “I don’t know. I am a little nervous.”He said, “I too am nervous. Look my hands are shivering.” I said, “Why?”

He said, “Maybe because I am talking to the most beautiful girl on earth.” I blushed and hid my feelings. I said, “Stop joking. I know how many girls in this college are crazy about you.” He said, “I know. But do you know that the guy so many other girls are crazy about - is crazy about you?”

“Do you know that it all started on the day you first entered college? I still remember that day. You had worn black jeans and a blue top. I fell in love with you instantly.”

I was awestruck. I felt as if I was surrounded by clouds. I looked straight into his eyes. He said, “I love you.” I too wanted to tell him that I loved him.

But my friend appeared at that very instant. She said, “Hey! You are here. I have been searching for you all over the college.”She then looked at Gowtham and said, “Hi!” He smiled, took my question paper, wrote something on it and left the place.

I was irritated with my friend. I tried not to react. She said, "I was surprised to see you talking to Mr India (we had given Gowtham this nickname). I just wanted to say, “Hi!” to him. But he walked away. I couldn’t concentrate on her words. I just turned my question paper to see what he had written. I saw a 10 digit number on it. I guessed it was his mobile number. My other friends joined us after a while and we left the college. I saw him in the parking lot when I was on my way out of college. He gestured to me and asked me to call him. I smiled and left.

The minute I reached home, I ran to my best friend’s house. I told her all that had happened between us that day. She too was very happy for me. I spent a long time talking to her.

She suggested that I play with him for a while. She asked me not to tell him, “Yes!” immediately. I too wanted to know if he really loved me. So I agreed to her suggestion.

By the time I reached home, I had a very bad headache. But I was so happy that I could even tolerate my headache that day. The next morning, I called him. I said, “I like you. But I don’t know if I really love you.” He was silent for a few minutes. He then said, “OK. Take your time. Think about it and tell me. I will wait for you.”

My friend and I giggled after disconnecting the call.

We then started chatting with each over WhatsApp and spoke to each other too. A week later, I decided to tell him that I loved him.

I had been very nervous the previous night. I just couldn’t sleep. The next day morning, I woke up with a very bad headache again. I just ignored the pain and went to have my bath. My life changed completely after that. I just went blank.

I blacked out and fell in the bathroom. When I opened my eyes, I was in the emergency ward of a hospital. My headache was killing me. I asked the nurse to call one of my family members. My sister came in. She said, “You were lying unconscious in the washroom. We had to break the door and get you admitted here.”The doctor then came and asked the nurse to take me for an MRI.

I came back after the scan was done. We were waiting for the report. When the doctor came on his rounds, he asked my father and my brother to meet him.  When they walked out of the doctor’s cabin, I could see that their faces had a dull look.

My dad could not look at my face. My brother said, “There’s nothing to worry. Go and meet the doctor.”

I met the doctor. He smiled and said, "How is your headache now? I said, "Horrible."He said, "I will suggest a few tablets. Just take them regularly. You will be fine."I said, "OK. But why is my head paining so badly?" The doctor said, "You have a migraine." I knew a migraine was very common. So I walked out happily.

I messaged Gowtham. I said, “I want to tell you something.” I knew he had guessed what I wanted to tell him. He replied and said, “I’m waiting, beautiful.”I was so happy to see his reply.

But I was really disturbed by dad’s and brother’s behaviour. I could sense that my dad was very upset though I had no clue about what it was all about. I decided to forget it and continued dreaming about my love. I spent the night rehearsing my proposal to Gowtham. The next day morning, I heard my brother and my dad talking to each other. My brother said, “Dad, even I am sad. But the way you are behaving, everyone is worried. Mom has been asking me why you look so upset.”My dad started crying. I couldn’t guess why he was crying.

But I too wanted to know the reason. So I continued to listen to their conversation.

Dad said, “She is the youngest of you all. She is my blessing from God. I have not allowed your mom to even speak harshly with her. Have you ever seen your mom or me asking her to do any work around the house? But today she is suffering from such severe headaches. I can't bear to see it."

I felt bad for my father. I knew he loved me to the core. He just couldn’t see me suffering. But I wondered why he was crying for such a small thing.

But the next piece of conversation almost killed me. He said, “The doctor said it’s a brain tumour. How am I going to save her? What do I do now?” My world came crashing down. I ran to the washroom and cried for more than an hour. I made up my mind. I decided to pretend as if I was not aware of my deadly condition. My mother too was still unaware of this. I stopped talking to Gowtham.

But he still messages me. I know he loves me with all his heart. I want to tell him about my condition. I want to cry my heart out on his shoulder.

I want to marry him and live as his wife at least for a day. But how do I ask him that? I want to die as his wife. That is my only wish now. But I don’t know if a person like me (who God feels is not worth living on this earth) can have such a wish.

We can all have endless wishes/dreams. But all of them will never be fulfilled. Yes, most of us assume that we will live forever. So we unknowingly fritter away our time by getting embroiled in meaningless pursuits. Let’s make the most of what we have now. Complete transparency is crucial in love-filled bonds. Let’s give love a chance to win in whatever time we have in our hands. Let’s share this story and fill this beautiful girl’s life with all our love.