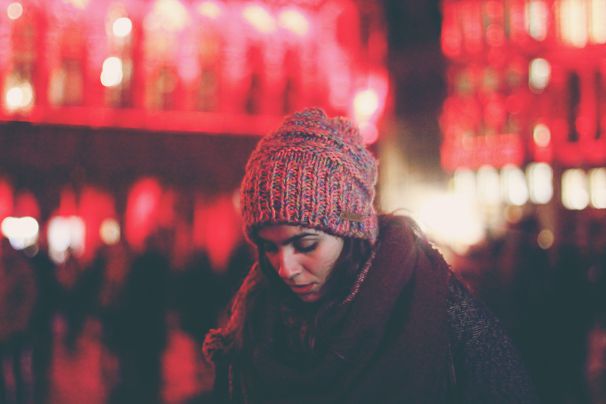 I never believed in an all consuming love. But then, I met him. I was in the third year of my graduation and was having a gala time. I was enjoying my college days, partying, getting to know new people and exploring new avenues. It had been almost a year since I had broken up with my first boyfriend and frankly, it didn't hurt much. There came a point when a friend installed the Truly Madly dating app on my phone to see how online dating works. I came across a lot of guys on the app. Most of them wanted a casual hook-up while others were just not my type. Then along came this guy who was real fun to talk to.

I had my exams coming so I took a break from the app and went back to focusing on my studies and forgot about him for a while. But he wouldn't have it like that. So, we started talking to each other almost daily and got to know each other really well.

We would subtly flirt with each other and slowly my mind started toying with the idea of dating him.

One fine day I asked him how he would react if I'd tell him that I won't talk to him thereafter. I half expected him to say, "Whatever, I don't care", but he seemed pretty disturbed with the idea and instead asked me why I would do something like that. That's when he confessed his feelings for me and I too told him that I had begun to like him.

A month later, we knew everything about each other. We knew about each others' families, friends, past life, relationships - nothing remained hidden. It was pure love. Then one day, my dad found me talking on the phone late into the night. When he asked me who I was speaking to, I told him that I was in love with someone I had met online. Of course, it didn't go down well with him. What followed was a real difficult time for me. My phone was taken away from me and I was kept under a close watch. But, I was in love and so I found ways to talk to my boyfriend, anyhow.

Finally college resumed, I got to keep my phone and we started meeting frequently. We could see nothing apart from each other. He was all that existed in my life. For a year or so everything went great, until we had this small fight that escalated real quick and he wanted a break from the relationship.

Initially I agreed to take a break, but I still wanted to know how long it would last. He said he didn't know. So, we refrained from talking to each other for a bit but failed miserably at it.

But the wedge had already been drawn between us. Eventually tired of all the fights, I decided that I was the one who actually needed a break because it was getting increasingly difficult for me to keep up with his mood swings. He had this habit of ignoring me and giving me the silent treatment whenever we fought and every time I had to go to him to apologize or try to resolve the fights.

I firmly believe in communicating and resolving all issues as two grown-ups. This time, however, he asked me not to take a break and promised that he'd change himself and try to keep his anger and mood swings in check. Things went back to being normal between us and we felt like before - the fun couple who could talk about everything, discuss their future and enjoy each others' company. Until one fine day, he said he wanted to break up with me, again. I couldn't believe my ears. I didn't know where this was coming from and why. I begged him to stay. He said his father wanted him to get married - he was only 25 years old - while I was almost done with my graduation.

I asked him to talk to his family and tell them about me. He didn't. He was too scared about how his father, who had drinking issues would treat his mother upon gaining knowledge that his son had an affair.

I respected that he loved his mother so dearly but I also knew that I deserved a chance, for which he didn't even try.

That's what hurt me the most. We tried to drag the relationship along for two months, thinking and hoping that things would work themselves out.

But I'd often cry myself to sleep each night and yet meet him with a smile on my face. This eventually started taking a toll on our conversation.

We stopped sharing things from our personal lives with each other. 'Us' changed into 'you' and 'me'; and the comfort we felt with each other, started fading away.

He treated me like his best friend, teasing and mimicking me all the time. At times we'd discuss his wedding and laugh - it killed me from the inside but his happiness meant everything to me.

Eventually, he talked to his parents and told them that he didn't want to get married for another two years or so, to which they agreed. But we didn't get back together because for me the feeling of love had already faded a little and I had felt betrayed. Neither did he ask me to be his girlfriend. He would always say that we don't have a future together and that it'd get really difficult for us to move apart later and that he was only doing the practical thing.

He got busy with his life and career and our conversations got increasingly shorter and less frequent. I still love him and want the very best for him. I'll always be there for him as a friend, because he asked for it. But I also know that I can't ever go back to loving him or anyone the way I loved him.

I don't regret the last two years of my life and there's absolutely nothing about the relationship that I'd want to go back and change, but there's a sincere request I'd like to make to all the girls and guys reading this: be ready to stay strong when you fall in love, because love comes easy but is very hard to let go.

When you say you love someone, be ready to stand by them when the time comes for it. And to everyone who told me, "You'll get over it", I'd just like to say, "No, you don't ever get over it. You just learn to live with it."