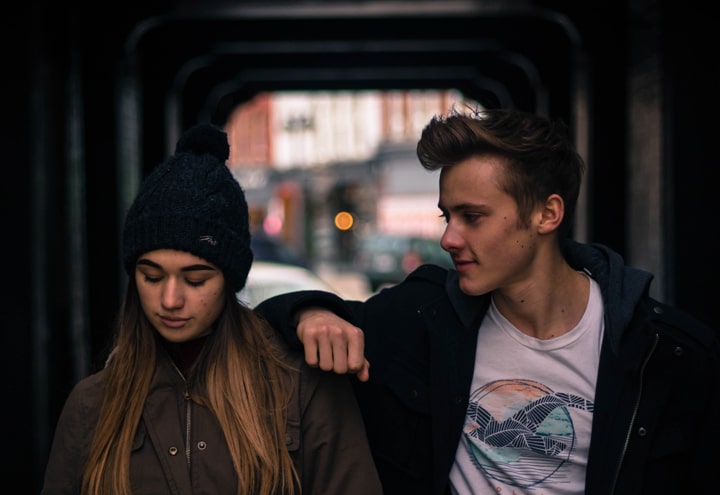 My story is of how a guy can fool a girl in love. I was 17 when I first met him through social media. We started to chit-chat and exchanged numbers. We used to talk for the whole night. We became friends and fell in love with each other. After 6 months of our relationship, I finally realized as to how much I loved him and what he meant to me.

We met for the first time in a club.

The meeting felt good and everything went on perfectly, though I felt shy when I saw him for the first time. Once, after my birthday he called me and asked for my help as he wanted some money to help his friend in need. I provided him with the money he asked for and from that day everything changed.

After our first anniversary, he forced me to have sex.

I was drunk but he was not. He forced himself on me and I was not aware until I realized his motives and stopped him. I asked my friend to drop me home and on the same night started getting lewd messages from an unknown number. It was actually him and he had told his friends that he had got physical with me while showing them my refusal texts.

After a few days, he came to meet me, asked me to forgive him and begged for one last chance.

He said he wanted to marry me. I fell for his lies and forgave (the biggest mistake I have made). Everything went on fine between us for a few months. But one day, I got to know from someone that he was seeing someone else. He denied it when I asked him, but I caught him red-handed when I hacked his facebook profile and found some provocative messages. I broke up with him, but after few days he came to see me with his brother and wanted to apologize. I asked his brother to guarantee that he would not repeat his bad behaviour and was promised the same.

In the second year of our relationship, I started working and earning good money.

One day, he called me and was crying as he spoke to me. I asked him to meet me but he denied and didn't call me back for one month. Post that, he suddenly showed up at my doorstep and when I went out with him, he said he was in some money trouble. He supposedly owed 1 lac rupees to someone, who was now threatening him for the money. I told him not worry about it and that I would give him all of my savings. I didn't have anything left for me but I helped him because I loved him and he was happy to see me helping him, like a real life-partner.

After that incident, he frequently kept asking for help and I helped him several times.

But one day, when I denied to give him money, he got frustrated and started to abuse me. Our sweet relationship changed into an abusive one there onwards. Whenever he wanted to get intimate and I denied, he used to force me into it. I tolerated everything. He used to hit me sometimes, but I never said anything. I always thought that maybe one day he will change and will ask me to marry him. He told me that he was going to talk to his parents about me soon, but it was just a ruse to get me into his bed. After a month, I got to know from his best friend that his parents Were searching for a girl for him to get married to. I was just a time pass for him whenever he wanted to sleep and gets money. He never wanted to marry me, was just using me and at the same time had involved himself in intimate relationships with other girls. I called him and shouted at him for what he had done to me for the last 5 years. I did everything to get the love I thought I deserved and he never bothered about anything except making use of me. I broke up with him and told him not to call me ever again. It took me over a year to get over him but now I'm doing great.

It's been 2 years since I last thought of him. I'm 22 years old now, single and happy. I am a grown woman, who has learned from her mistakes.

Share this story in support of those who are genuine in their love.