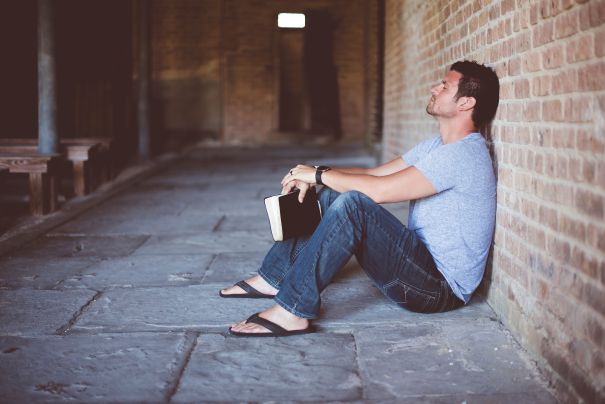 I grew up getting compared with my sister, my cousins and even my classmates because I wasn't a particularly bright student. My father used to beat me a lot but I didn't change much. I was always interested in music and asked him to buy me a guitar, but he said that I won't be able to learn it well. I proved him wrong by trying hard and becoming quite good at it. I even joined a band, but couldn't continue with it for my parents wanted me to study engineering. I often used to feel lonely because I failed to get affection from my family and had a limited friend circle.

So, I used to spend most of my time reading story books and love stories and dreaming about meeting the love of my life and living happily forever with her. I know it might sound odd coming from a guy.  But I believe in love and guys like me exist too.

In college, I met her and felt she was the one for me.

I loved her like crazy even though my mom did not approve of her because she was two years elder to me. But, she did not love me back me as much. In fact, she treated me however it suited her. Sometimes, she did not take my calls or even answer back my texts.

She was also in touch with her ex , while her parents had gotten her engaged to someone else. Despite all this, I couldn't stop loving her.

One day we had an argument and she ended up saying that she will marry someone else. Hearing this, I couldn't stop crying and decided to let her go. Months passed by like this and then one night she called me and said that she loved me. She was drunk and insensible. I knew that she had called me only because she had no other option, but instead of listening to reason, I let myself get emotional. Once again, we were in a relationship. But soon after, she started ignoring me. When I asked her why, she gave me excuses like "we aren't meant for each other" or "my parents don't want me to talk to you". However, she went a step further this time and blocked me from her call list and her social media.

I was used to her treating me like sh*t. But I slipped into depression, this time and started consulting a psychiatrist.

I had only started feeling better when she decided to re-enter my life. I trusted her for the fourth time when she said that she wanted me in her life. She told me that she had broken up with me and ignored me in the past because she was involved with her ex and had been physical with him too.

Once again, I believed her and we spent all our time talking to each other. One week before Saraswati Puja, I asked her to go on a date with me. But she refused to come because her elder sister had come to stay with her. I agreed without any complaints or demands. But the the next day, every time I called her, her phone went busy. Every single time. I left her messages, but she didn't reply to them either.

I started feeling betrayed again and all my fears came true when I saw that she had changed her status from single to "in a relationship" on FB.

I was shattered into pieces. I sunk into depression, again.

How can people be so selfish? I started cursing her, calling her a whore, wishing all ills to fall her way and her life to be miserable. It helped me divert my mind for sometime, but it didn't reduce the pain of betrayal. Is it wrong to love someone more than yourself? Was I wrong in trusting her blindly?

Her betrayal was the price I paid for being loyal and honest in love. Whenever a guy slaps a girl, its easy for society to judge him. But if a girl slaps him, the society assumes the guy must be at fault. Sometimes I think it is better to be a player than being played, but my instincts do not allow me to be so and I am proud of being the way I am.

After being betrayed by the same girl four times, I learnt that while it's okay to fall in love, it's not okay to trust someone blindly. If anyone of you is going through the same situation, remember what happened to me and don't trust your lover blindly. If they keep coming back into your life, try to understand their true motive for doing so. Just never be the emotional fool.