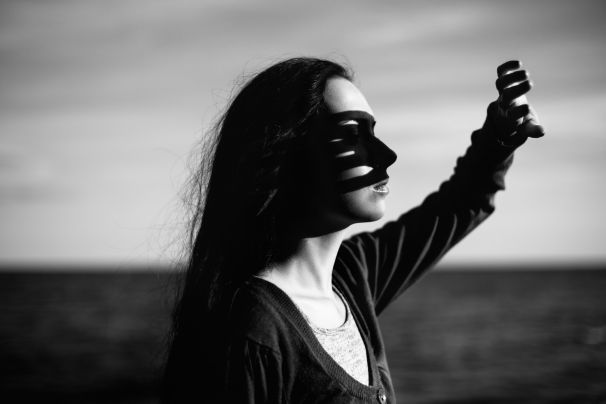 My family and I had gone to Kerala to spend our vacation. I was surprised to see that my friend too had come there for her vacation. Naturally, I was very glad to meet an old friend of mine after such a long time. We spent a few hours together and then returned to our homes the same day.

A month later I saw that someone had sent me a message saying “Hello” through my Facebook account. It turned out to be my friend’s husband – the one whom we had met in Kerala.

He was living away from his family because he had been officially posted to a different city. We chatted a little. I was usually free in the afternoons and so we talked sometimes. Slowly we started getting to know each other. We discussed our likes, dislikes; moods etc. and found that we had a lot in common.

Soon our chats became a part of our daily routine. We sent our favourite songs and ghazals to each other and he always praised me. We started chatting more often now.

I had been married to my husband at a very early age. So I was the mother of two children now and was living a so-called ‘happily married life.' He too had a little daughter. After a while, he went to meet his family and we could not talk as frequently as we used to.

Both of us realized that we missed each other a lot.

When he resumed work he confessed that he had missed talking to me. He felt that he had fallen in love with me. I was at a loss to say anything to him at that time because I did not know how to react to what he had just said.

He confessed that he loved his wife a lot but I was the kind of girl that he always thought about. I refused to go ahead with this kind of a relationship but I told him that I would love it if both of us could be good friends.

Gradually we started sharing our innermost thoughts and feelings with each other. We had become more than close to each other and I felt comfortable sharing anything with him.

One day I told him everything about my life. I had never spoken about this to anyone else so far.

I had been married for 12 years now. My parents had selected the groom for me. I had been only 20 years old at that time and I had shouldered all my responsibilities very well. My husband and my in-laws were very supportive. And they had helped me and co-operated with me when I had wanted to pursue my studies even after I got married.

I now had a good job and was leading a happily married life. Until 3 years ago, everything had been fine in my life.

But my husband had the habit of consuming alcohol. I knew I had to ignore such weaknesses in a marriage and look ahead. But 3 years ago, I came to know that my husband often visited prostitutes. I had been heartbroken at that time. I wondered if he was missing out on some aspect of love in our relationship.

But I had not talked about this to anyone because I did not want to break my marriage. I also had to think about my children’s future. I felt the best thing to do was to remain silent about it.  But he had deeply hurt me by doing this. I felt very lonely in our relationship. But I ensured that I kept myself busy the whole day. I avoided situations that would harm our relationship.

But I got a lot of support when my friend’s husband talked to me. I felt at peace mentally. Both of us had learned a lot from each other. Every day he would say that he loved me over the phone.

One day, I couldn’t control myself. I told him that I believed that I too had started loving him.

We talked over the phone but our talks had taken a different turn now. He now talked about coming close to me and having sex with me. I liked it when he talked to me in this manner and we would often end up talking about sex and love.

Talking to him gave me a strange sense of satisfaction.

We both felt very close to each other though we lived far away from each other in different cities. He would ask me to meet him but I would always refuse to do so. I somehow could not gather the courage to do this.

Our relationship is stuck in this strange turn of our life. He keeps telling me that he is not bothered by the fact that we can never meet each other in person. He tells me that he will always love me.

One day, he started crying like a child when he was talking to me. I did not know how to respond to this. He wanted to express his love for me but was not able to do so. He sobbed for a long time and I too became emotional.

He said that he regretted not meeting me earlier.

We talked to each other that whole night. I found that we shared a close bond with each other after that day. He has never forced me to meet him. We just want to remain best friends for our entire lives. I might even gather the courage to meet him someday.

But I don’t want to cheat on my friend by entering into a relationship with her husband.

I found the support that I needed at that point in time in my life from him. I tried not to discuss all the aspects of my life with him but was unable to do so. I don’t know how to repay him for being there in my life when I needed some support from someone like him. But I know that I will not be able to fulfill his wish of meeting him once.

Sometimes I wonder if what we are experiencing is love or just lust. I get confused at such times. But I don’t know what I want and what will happen to us. People make decisions based on their perceptions of life. I know that the feelings that we share are as pure as faith. I am sure about just one thing. He has become very special to me.

He is the special secret friend of my life and though I have found him I can’t get him. Maybe this is what is written in my destiny. I don’t know if I should feel lucky about meeting him or regret meeting him.

Share this story if you too feel that love works its magic in mysterious ways sometimes but it unfailingly fills the void of loneliness in our lives.