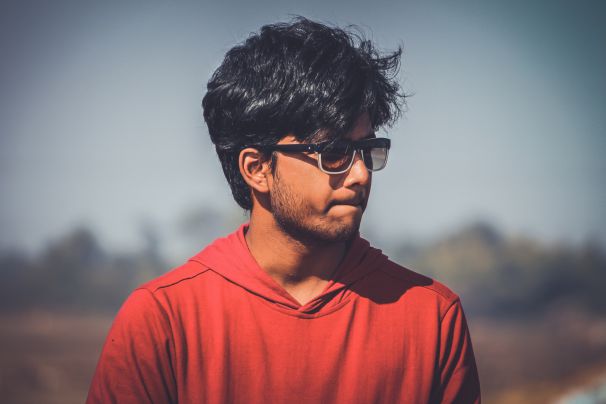 Hi! My name is Faiyaz Khan. This is my real story.

I was studying in intermediate and she had just started her 10th grade. 18th July 2015 was the day on which we first started chatting on WhatsApp. She was a good hearted girl, but outside she was too rude.

Many boys wanted to talk to her but they all failed because they all did the same thing like asking her questions like “How are you?” and “I know you” etc. But when I first messaged her, my words were, “You look like a churail!” I knew no one had told her anything like this yet. Then we both started talking.

Somehow along the way, I really don’t know when I started loving her. I had never loved anyone like this before.

I loved her because her heart had been broken by a guy who had cheated on her. I was also suffering from the same kind of pain. Her heart was made of pure gold. It was impossible not to love her.

7 months passed by very slowly. We were deeply in love. We both talked to each other for many hours.

After seven months, one scary day came when she left me. Her mother could not accept me because I was a Muslim guy and she was a Hindu.

She loved her mother a lot. That’s why she changed her number. After that, we didn’t talk. I felt like my life was ending. I was like a psycho. I cut my hand and was in the hospital for 1 day and 15 hours. She didn’t come to see me. I started smoking and took up all other bad habits. My life changed totally. I cried at nights and smoked some very bad stuff which made me forget all about her at that time.

8 months of my life passed like this only. My life became totally hell. After 8 months, she messaged me from her friend’s ID. When I saw it, I became mad again and requested her to not leave me.

She promised me that she will be with me in any situation. Then again our love blossomed. We both loved each other. I left all my bad habits. My first and last priority was this girl. I really didn’t need anyone when she was with me.

We fought a lot. Slowly we started having a lot of misunderstandings. I shouted at her for what she wore and for having male friends. But honestly, I always shouted at her because I cared for her. Our society was not good. That’s why I told her not to wear those types of dresses that looked bad in the eyes of others.

I had a problem with one of her male friends. He had proposed to her earlier in 9th class. They both talked on Facebook. I got jealous and one day I blocked him.

I’m the type of guy who had never talked to another girl because she was enough for me. I didn’t want any other girl in my life.

I always think of one thing. If she was enough for me then why was I not enough for her? My heart was pure.

We lived in the same area. But in 2 years, I hadn’t met her even once. I had seen her many times but from afar. That’s why we decided to meet.

Yesterday, we both met in a shopping mall. She was nervous and afraid. That’s why she didn’t talk with me. She went away in 2 mins and 56 seconds. We didn’t talk. We had only seen each other from a close distance. I became angry with her behavior. After 2 years we were meeting, and she did not even talk to me.

After fighting for a long time she told me that she had wished the boy that I had blocked earlier a happy birthday. This was not a big mistake but my heart started crying. I don’t know why. I have a fear that this boy will propose to her again.

We started fighting again and after that, something happened, and we decided to part ways again. I have changed my number. But I miss her a lot. I want her to come back.

I only want you to say ‘I love you and I can’t live without you’ to me. I love you a lot. I am crying. If you are reading this then please come back because I love you so much.

Share this story if you too feel love becomes lovelier with understanding and trust.