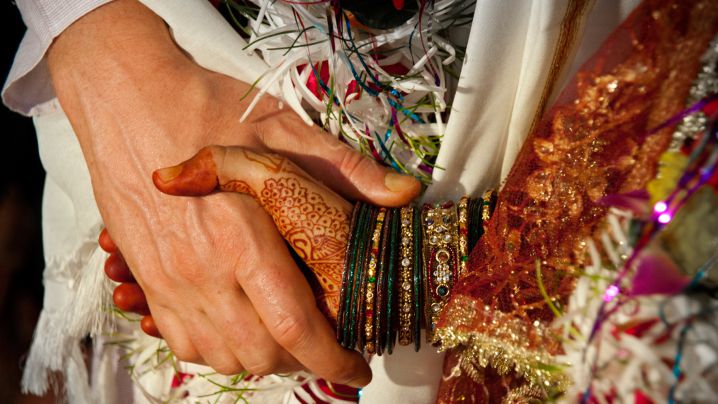 I belong to a middle-class family, my father worked as a bank manager and my mom is a home-maker. After I completed my studies, my parents wanted to get me married and with that began the search for a suitable guy.

Next, what followed was rejection. My pictures got rejected one by one due to my overweight. Deep within my heart, I knew my Mr. Right would come and accept me as I am and my life will change with his unconditional love, but I was wrong.

After several rejections, that moment of acceptance came when I felt my dreams were coming true. A family came to see me and they liked me as I am. Both the families allowed us to talk to each other. After talking to him I felt that he was the right man who was created for me. He never complained about my weight and his mother and two sisters were very sweet towards me.

Finally, the dream day arrived. I was getting married after all the drama related to arranged marriage was over. I was very happy that "Meri shadi ho rahi hai."

I am my parent’s only child and my father has spent lots of money in my marriage. It was a grand wedding indeed. Whereas my in-laws are not very rich but they loved me enough and accepted me as I am. My hubby also loved me and I reciprocated the same.

First six months of my marriage were very beautiful. Then suddenly one day he left his job due to some personal issues with a colleague. He was the only bread earner in our family but with that sudden decision, he became jobless.

He didn't discuss the matter with us even once and without any prior intimation, he resigned. This led to a huge financial crisis at home. I wanted to work but my mother-in-law said that since I was a newlywed bride, I would not be permitted to work outside. After this my life became very difficult, he used to remain frustrated all the time and somehow the blame was put on me - that I am responsible for his failure in his job.

His mother started to blame and name call by saying that I am “Asubh” for her home; I brought an evil fate on them. I spent my days crying at the sudden change of fate and went through a spell of depression. I used to cry day and night in my room but nobody even bothered to inquire about my state of mind.

I used to call my parents every day and tell them what was going on at my in-laws' house. As days passed by, they started getting tensed and here situations became worse for me. My sister-in-laws started passing comments on me every time and found a flaw in everything I did. They also directly insulted my parents and my upbringing. As I got more depressed, I finally decided to work.

Somehow among all the mental trauma and blames, the first year of my marriage passed and I kept applying for jobs and luckily I got a job. But only after a month, one day I was feeling very sick. My mother-in-law accompanied me to a doctor and I was shocked to know that I was pregnant. I was not mentally prepared to bring a new member to the household which was going through a heavy financial crisis.

I shared my thoughts with my husband but he didn't even bother to understand my point of view. Till then, he couldn't find a single job yet he wanted a baby very soon. I never understood why he was in the hurry of having a child when we were amid a huge financial crisis.

I left that home and came to live with my parents. I told them that I wanted to abort my baby but they wanted me to give birth and said they would take care of me and my baby. So I got convinced.

After those lonely 9 months, I gave birth to a baby girl. He didn’t even bother to make a call during my pregnancy. After my baby was born, I had to continue my stay with my parents. Now after completion of a year, he is telling me to come back and I am confused as I don't know what to do.