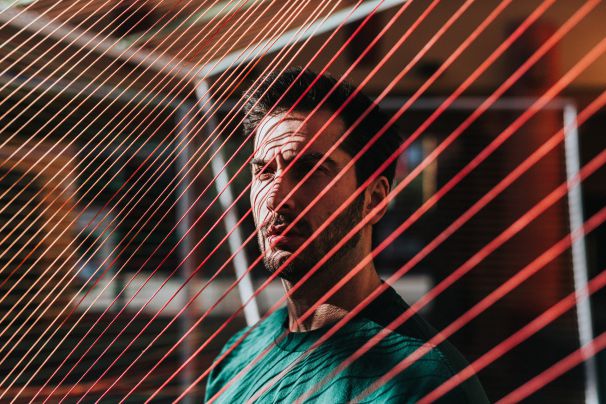 She is happily married now to a very successful person and has a very beautiful daughter. This story is not about whether she cheated on me. Neither is this a story about why she married him. This is just my way of attempting to move away from her.

It is so true – no one has the ability to forget their first love. Maybe we can even replace the person but our first love will always remain in our hearts. I did not know this.

And she continues to have a place in a special corner of my heart even today.

We live in Dubai and we broke up 6 years back. But there has not been a single day when she hasn’t crossed my mind.

Sometimes it is just a small thought.

I was in school when I met her for the first time. She was my junior. We studied in the same school but had different shifts because boys were not allowed to mingle with girls. In those days, we all had to appear for a preparatory exam before appearing for our 10th standard board exams.

And we had to appear for that exam in the morning along with the girls. Naturally, all of us were excited.

My friends had given me a nickname. I wasn't particularly fond of it. But there was nothing I could do about it either. We all lived in the same area. So she too travelled on the same bus with her gang of 4 friends. One of my friends was her friend’s brother. He had told her everything about me including the nickname by which they always called me.

We were all tense on the first day. Not because we had to appear for the exams but because we were travelling in a bus along with the girls. But by God's grace, all went well and we did not have to worry too much about anything. When I boarded the bus the next day, I could hear the girls howling at the back of the bus. They were sitting in their seats and were talking loudly. I was an introvert so was more interested in my textbooks.

But all of a sudden, I heard my nickname being called out. I was shell-shocked. I couldn’t utter a word at that moment.

I felt as if my friend had stabbed me in the back. They continued calling those names till we finished writing all the exams. But I just sat in the front seat quietly because I did not have the guts to even turn back and see who those girls were.

The exams got over. I got through the exams and was now in class 10. The first thing I did now was to get the details of those girls. I didn’t know what I wanted to do with the details but I was very agitated by their behaviour. I thought that I should at least scold them. I knew I would feel better.

I took my best friend's help and with great difficulty, I managed to get their email IDs. Mark Zuckerberg had just created Facebook at that time and it had not yet become popular amongst the youngsters. Our parents hadn’t got around to exposing us to the world of cellular phones at this time. So all I could do was to email one of them and wait for her reply.

I was a male chauvinist pig back then. I thought that the girl would be sorry for what she had done to me and would end up apologizing to me over an email. I thought that I could then end the chat and close the chapter.

But God had planned something big for me that day. She replied to me. I had gone to the internet café to check my mail.

The reply had my nickname written on it in bold and capital letters. I was ashamed of my immaturity but was also surprised by her boldness.

She was the first girl that I had come in contact with so far. So I never really knew how girls were or the kind of thought process they had etc. All these things were new to me. I would be surprised to see a girl smoking. That was how bad I was in matters related to girls.

But I was impressed that a girl of that age could be so full of boldness. This really made me want to talk to her.

But one fine day, I told her that I was falling for her. I told her that I would like to be with her for the rest of my life. She was reluctant to reveal her feelings to me. She just said that we belonged to different districts and our parents would never agree to get us married and all such stuff.

She wanted to stop me from becoming her boyfriend because she wanted me to remain just a boy friend.

But on the other hand, I was excited to actually love a person like her. I asked her to take her time and reply to me. She was fine with this. The board exams started. I had already appeared for two of the exams. We had to appear for our third paper and we had only one day’s gap to study for it. I was wondering how I should go about studying for my exam when my friend came home and told me that she was visiting her friend who lived in our building.

I was super excited. She came and called my friend and asked him if they could meet me. I was waiting for this.

I went to meet her and spent almost 5 hours with her.

I actually forgot that I had to appear for my exam the next day. I got to meet her again only after a few months.

But that meeting and those 5 hours that I spent with her that day have given me the fuel to run all my life.

I still recollect all that happened that day. It looks like as if it happened yesterday. She did not confess anything to me. But I got all the hints that I wanted and knew that she too was fond of me. I had become popular in school because of her. So meeting her in school too was quite easy for me now.

One day, my friend decided to play a prank on me. He dialled her number and showed it to me. When I saw her number, I thought she was calling him. But later on, he revealed to me that he had just been playing the fool with me. But a few minutes later, he got a call back from her number. The call had registered on her phone. She had seen it and was calling back now. We started talking and it continued for some time.

Suddenly her mom entered the room.

She signalled to me and asked me not to talk but I didn’t really catch what she was trying to say.

Her mom heard my voice.

I was tense and could not sleep well that night. I was eagerly waiting for her friends to call me. But nothing happened. The next day was Friday. I met my friend in the mosque and he told me that he had received a call in the morning asking him about all his details. Later on, we came to know through her friends that things were sorted out in her house.

We sighed with a sense of relief.

The next day, I received a call on my friend’s mobile. It was from her mother and she was commanding me to stay away from her daughter. I didn't really know how to reply to her so I just said, "Sorry Mother!”

After this incident, it was next to impossible to meet her.

In the meantime, I had also told my parents about her. I was put under house arrest for quite some time. I too thought that I should give her some time because she was in the 10th standard now. Things had not exactly sorted themselves out in her house but it was not as bad as we had imagined things to be. We managed to talk about once in a month and pushed along with this.

But God was done with playing this game with us. He put the last nail in our relationship when her brother took her mobile and saw all our chats in it.

He was furious with me and wanted to thrash me.

My father asked me to call her brother and talk to him.

I could feel the tension increasing between us while we were talking.

I told him to talk to my dad.

He had not expected this. He probably assumed that I would never have disclosed this to my parents.

So her brother too handed over the phone to his mother.

I don't know what they talked about but later on, my dad told me not to contact her in future. But while my dad was talking with her mother, I told him that I would like to talk to her. I told her mother, "Maybe I am still immature but I truly love your daughter. But from now on, I won’t give her any chance to even think of me. I won’t disturb her anymore. I won’t try to contact her again.”

Her mother relaxed after I gave her this promise. I have kept the promise that I gave to her mother.

I cried my heart out that night. Only my best friend knew how I felt. But I still couldn’t forget her.

I know this is not a one in a million kind of a story. But for me, it is and will always be my own special story. I did try to replace her love but nothing ever really worked for me again. I have lost the will to earn well and lead a respectful life.

Now, I just want to flow with the tide and fade away one day. She was my dream. Maybe I didn’t really deserve her. But I wish her all happiness always.

The universe works in its own mystical way. If we have experienced disappointment in our lives, somewhere sometime we will also experience happiness and bliss. Love is a beautiful ethereal feeling that warms our hearts. We may never be able to forget our first love but that does not mean we shut out love from our lives. Let’s share this touching story and hope that this dignified young man finds love and fulfillment again.