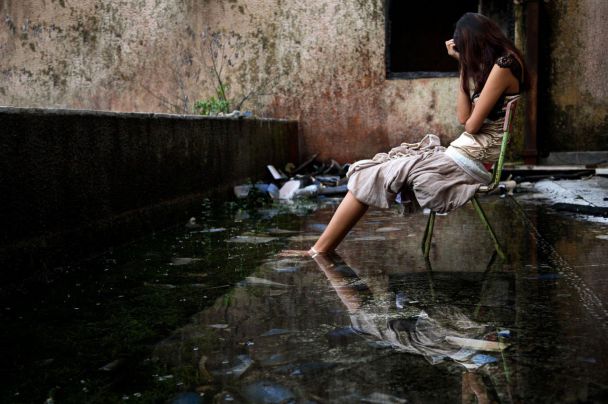 13th February' 2013, a day I can never forget. It was the day when we reached with my mom's body to my native place, Jodhpur.

It was a long journey from Ahmedabad to Jodhpur. Me, my brother and my boyfriend reached home after 13 long and unending hours of the journey in an ambulance with my mother's coffin on one side and three of us on the other. The first person I called after reaching home was my aunt. We told her that we had reached, to which her reply was, "What do you want me to do?"

I was shocked. But immediately improving her tone, she said, "We are on our way and will reach in half an hour."

The moment we reached home, we had to clean our house as we had not been there for a long time because of my mother's treatment. After cleaning we brought her coffin into the house. We were afraid to open it and to our surprise, all our relatives and neighbours finally arrived.

They opened it and I just could not look at her, she was so cold. I could not feel her warmth when I touched her. It was the most horrible experience for me. I have no idea how I was keeping my calm.

And then they took her for her Antim Sanskar. That was the last time I saw her.

After two hours of her sanskar, my relatives started discussing something. They started gossiping that it was because I had left for work 6 months ago. That is why she died!

Six months back in July 2012, my mom came to drop me to Jaipur airport because I had got my placement at a very good organisation. She was happier than I was.

I was doing well and came thrice in between to meet her. My extended family was against me working as according to them, it was my age to get married and they couldn't digest the fact that at the age of 22, I was going to start earning.

Mom supported me in my decision (which they told her was a bold decision). Not only her, my dad had also supported me in getting higher education when he was alive, as they didn't want to waste my potential. My dad himself was successful in his own field and he saw himself in me.

But this was something intolerable for my extended family members, especially my uncles and aunts. However, they didn't have the guts to say a word to my parents because we used to support their families financially (my dad had supported them all their lives as they didn't have much potential themselves to earn well for their families). My mother was always by his side in his decisions.

January 15th' 2013- my brother called me saying that my mother had a paralysis attack. I was extremely worried and took the next flight home. With time, she started recovering with medicines and care but on February 10th, she got a brain haemorrhage. We rushed her to Ahmedabad as after spending a few hours at a local hospital, we were not given much hope. She passed away in the hospital on the 12th.

Now back to present, my gossiping relatives blamed me and my siblings for our mother's death.

To which I replied saying, "What kind of logic is this?" It hurt their ego and the entire family started abusing me in front of my neighbours, they even called me a w****! They said I was earning my living through prostitution.

The amount of jealousy and hatred they felt all their lives came back on the day when I was in my most vulnerable state. The fact that I was different from all the kids and was well educated and earning better than them didn't go down too well with them.

They shamelessly insulted me just 2 hours after my mom's body had left our home. They didn't even have any respect for my father, who, all his life, never hesitated to help them to provide them with better lives.

In that moment, the only people who stood by me were my friends and my boyfriend, they told them things they deserved to hear. But, this whole incident left a big hole in my heart. I could not join work for the next six months, I started getting anxiety attacks, but with time and my siblings' and friends' support, I started getting back to good shape.

Today, I am at a very respectable position in my dream organization but still I am not the same confident girl. The girl who used to debate fearlessly now gets anxious when there are group discussions and presentations, so much so that I calm myself 100 times before even speaking a word. My mom didn't go alone, but she took a big part of me with her.

Today, I am not in touch with any of my relatives, I don't know if they are alive, suffering financially or not, but because of my parents' mentality and education they provided me, I am able to survive without family.

This life lesson is also for all the people who have judged me for being different. Stand up and fight for yourself! It is your life and you yourself are responsible to give a better life to yourself. If I had wanted, I would have given into my relatives' demands but I didn't.

After all, their venomous words have only helped me move forward. I know I am still grieving for my mom, but at least I am independent today.

The only fact that disappoints me today is that my parents are not alive to see where I am but I am sure, they are at peace wherever they are.