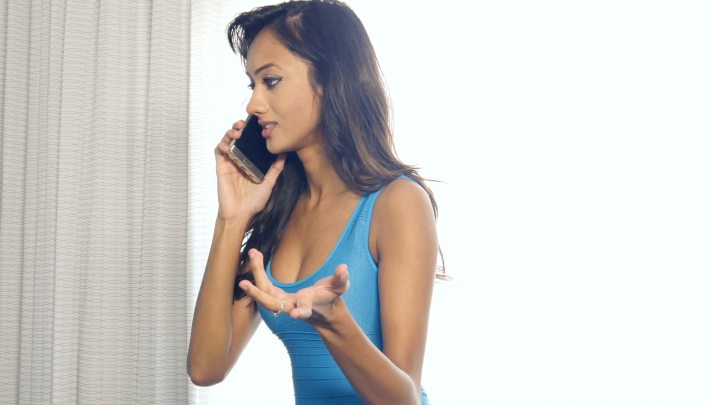 My brother got married to a girl from Bikaner. He was engaged to her for more than 4 years. It was a typical arranged marriage. As a family, we were happy and excited about our new family member and welcomed her wholeheartedly.

Sometimes I felt that my parents loved her more than me and I felt a bit jealous about this too. But I too was happy about it because I thought that I would get a good friend with whom I could share everything.

My brother and I were working in Bangalore and lived away from our parents. I welcomed her on the first day. I decorated their room and prepared a lot of good food for them. I wanted to surprise them. They seemed so happy.

I really loved them and wished them both a lot of happiness.

I told my so-called bhabhi that I would not call her bhabhi. I gave her a cute name and started calling her Angel now.

After a month or so I had to work on a night shift. So she would cook lunch and I would cook dinner so that the work was divided. My brother had spent quite a lot of money on his wedding so he was facing a financial crunch now.

So whenever he asked me to help him out I would do so willingly.

A month later her behaviour towards me changed suddenly. She stopped talking to me and did not offer me any food. I usually got to spend some quality time with my loving brother only during the weekends.

But now I sensed that she wanted some privacy. So I started going out with or without my friends during the weekends so that they could enjoy their special time with each other.

After a few days, I started suffering from some health issues. So I decided to go to my hometown for further medical treatment. She told my brother that she too wanted to go to her parents’ home. My innocent brother told me to take her to our house. He requested my parents to drop her to Bikaner. I came back to Bangalore after a week and she returned after a month.

But she started behaving very differently after she returned. She would simply look past me and ignore me. I was clueless about the whole thing and wondered what I had done.

I tried to impress her by buying her chocolates, cakes etc. I would order food from outside and take her the parlour but things between us did not improve.

One evening all of a sudden she just started yelling at me. She said, “What do you want from me?” I looked at her and said, “Excuse me! What happened?” My brother was doing his best to manage her. He was telling her not to shout or abuse me. But she did not stop screaming at me.

I was still confused about her behaviour and tears rolled out of my eyes. My brother tried to pacify her but she asked him not to interfere in the matter.

My mom then called me and asked me what the matter was. I told her that I did not know what the matter really was. I just knew that she had not been talking to me over the past few months.

I told her that she had now started quarrelling at home.

My father asked me to book a ticket and come back home as soon as possible. But my brother forbade me from going home. My brother begged her to settle the matter with me.

He didn’t want to spoil our relationship. I don’t know what really happened that day but she did say, “Sorry” to me.

The next day she discussed the whole thing with her father after adding some masala to it. Her father called my parents and started blackmailing them emotionally. He called my brother ‘impotent’.

My parents were heartbroken when they heard such things from her father. But they didn't discuss the matter with my brother because they thought that there might be some truth in her father’s statement.

They knew that it took some time for some couples to start a proper physical relationship. Her father now knew that my parents did not discuss such matters with my brother. So he called my mother every day and started abusing her.

My mom would tell me everything because she wanted me to take care of my so-called bhabhi.  My parents waited till Raksha Bandhan to come over to our place. We all planned a long holiday and a family trip so that we could spend some time together.

But a week before my parents were supposed to come over she again started shouting and yelling. My brother and I were shocked by her behaviour.

My brother took me downstairs to a garden and asked me if I knew what was happening to her.

I told him that her father was threatening and abusing our parents because they felt that he was ‘impotent.’ My brother clarified things and said he was an inexperienced guy who was taking time to learn about SEX. But she wanted to get intimate with him like an animal. He said he was a decent guy and was doing his best to satisfy her sexual urges.

Now that matters had been sorted out between us she was hell-bent on breaking our family.

My parents came and discussed things with her. But instead of listening to them she started blaming me and my family for spoiling her life. My brother told my parents that she threatened him by saying that she would leave the house. He told them that she abused him and this was stressing him out. He felt he hated her with his whole heart. But he cared for her too.

He told them that he too had a sister and did not even want to think of ruining another girl’s life. He also told my parents that he had gone to a doctor and got himself checked. He had done this to assure her that everything was fine in their sexual life.

He said that the doctors had requested her to be more understanding and give each other some time for things to become normal. But she didn’t want to listen to the doctor. We then just assumed that her sexual urges were on the higher side.

One fine day she had a big abusive argument with my parents and left the house with the relatives that her father had sent. She left the house saying, “Aap log mujhe ghar se nikaal rahe ho.”

I was shocked by her words. My parents had not asked her to leave the house. She was the one who had wanted to go.

This girl was creating her own drama and then shifting the blame neatly on to my parents’ shoulders.

Thank God I had the sense to record the entire conversation on my mobile that day.  She tried to contact my brother after a few days. She then sent him a message which said, “Hamare beech me sab sahee tha na. Aapke parents ne hume alag kar diya.”

I wanted to tell her, “Hey baby! My parents did not interfere in your life. It was you who created all this f**king drama in our lives and now you are blaming my parents for it. Wow!”

After going to Bikaner she lodged a FAKE dowry case against my family. Maybe they just wanted to threaten my family and wanted us to know what they could do if they set their minds to it. The officers at the police station counselled them but my brother started hating her now.

She had abused my family at the police station and my brother could not think of staying with her anymore.

They have filed a case against my family and the case is still going on. Despite having so much proof about our innocence we are suffering because our Indian laws are so f**king blind on such matters. The guy’s family always suffers so that such b**ches enjoy their lives. Sometimes I wish I could go to the past and delete the day my family met her.

Can we ‘live happily ever after’ if we refuse to shoulder the responsibilities that are associated with a marriage? Why do we assume that love means sharing a wonderful physical relationship alone? Why do we allow ‘romantic illusions’ to cloud our good sense? Let’s share this story and enter into our marriages with total awareness. Let’s give ourselves, our partners and other family members ample time to adapt to the new scenario. Let’s learn to understand people before we judge them.