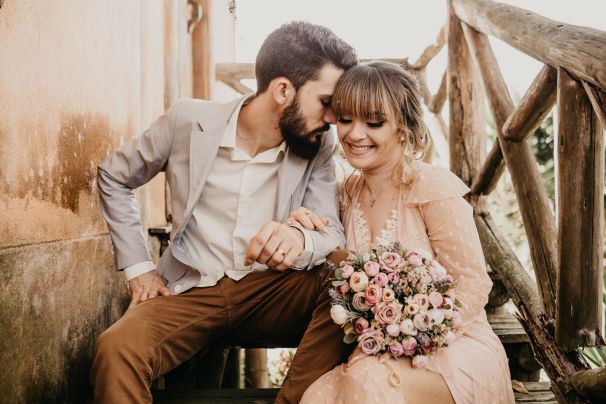 This happened about seven years ago when I was waiting for the final results of class 11. I’d got my very first mobile phone. It was not a fancy one, just a basic model to call and text my friends and listen to the radio. But the phone became my world.

I studied in an all girls’ school and had never been exposed to the concept of “co-education”.

My carefully built world revolved around my family, my female friends, and my pets. Suddenly, one day, everything turned upside down. My sister asked for my mobile to text one of her friends about a project. She returned my phone and everything was normal until one Saturday when I received a message from an unknown number.

It was a funny message about the Telangana movement that took place in South India. I had a good sense of humour with a generous dose of sarcasm but I did not find the message funny, so I replied to the text saying, “Do you expect me to laugh?” The next morning, I got a reply saying, “You are tougher than your sis.” That’s how I started communicating with an unknown guy.

Within a few days, the random texts changed to introductions and later conversations.

We exchanged hundreds of messages through the day for over four whole days. We spoke about ourselves, our likes and dislikes and common interests, which brought us so close that on the fifth day, he proposed to me. We had never seen each other’s faces, moreover, technology was also poor and it didn't allow us to share our photos.

But it was hard to deny the fact that my feelings for him were pure and natural.

On the sixth night, I accepted his proposal. I was deliriously happy and felt like the heroine in a movie who falls in love and the background music starts playing automatically. Our relationship had matured beautifully from a larva into a butterfly.

We used only messages to express our feelings and describe our features to each other, leaving our actual appearance to the imagination.

After two months of talking, there was a sudden miracle where my messages were not getting delivered to him. He texted me non-stop out of concern and worry but I couldn't reply back due to some technical glitch. I call it a miracle because I had no option but to call him and that was the first time that we heard each other’s voice. He was the first male that I spoke to apart from my brothers and uncles.

I’d never called him earlier because I was brought up in a strict environment where taking to other males or having male friends was a sin.

But we fell in love with each other’s voice and that’s how our relationship became stronger. And we hadn’t even seen each other or met in person yet! A few months passed by and we finally decided to meet face to face because we were ready to take our relationship to the next level. When we met, we couldn’t take our eyes off each other. That was the best day of my life and the memory is still fresh in my heart.

However, our secret relationship did not remain secret for long.

Six months later, my sister caught me red-handed when she saw the messages exchanged between him and me. This damaged my relationship with my sister and his friendship with her too. All her friends tried to brainwash me that I was too young to fall in love with someone. To add to it, I got the shocking news that he was a Catholic. I was a Hindu and my parents would never accept him, rather they would kill both of us without thinking twice.

Believe me, we had never spoken about our caste or religion; ours was just pure love between a woman and a man.

Fortunately, my sister did not inform my parents about our relationship because she was aware of the outcome. Instead, she asked me to break up with him and both of us agreed to it.

In reality, my boyfriend and I faked our break up for our families and continued our secret relationship.

However, things got worse when my 12th class grades dropped badly and my father took away my phone blaming it for my bad marks. As luck would have it, my birthday came soon after and my boyfriend gifted me a basic mobile to keep in touch with him. I had to keep the phone hidden at all times. This went on for a year until it was time to decide where I would pursue my bachelors. In the meanwhile, my parents got me a new phone.

When I felt that things were slowly falling back into place, I got another shock! My boyfriend told me that he was moving to the USA for our better future. I was shattered! I didn’t know how to react; I started blaming myself for loving someone who was going away from me.

After a lot of pain, sleepless nights, tears and suicidal tendencies, I decided to give up on my sadness and give our long-distance relationship a chance.

He created my Facebook account for us to stay in touch. We were apart for over four years but we never gave up and survived through thick and thin. Not a day went by without talking to each other. After my bachelors, I was confused about my future.

My friends suggested that I go abroad for my Masters and be with the one whom I loved (In the five and a half years of our relationship, we had barely met 10 times). But our financial situation at home was not stable and my family couldn’t afford to send me abroad.

I'd prepared my heart to spend another three years apart from my love.

I was hoping and praying for another miracle. And it happened! My boyfriend asked me to arrange for my passport while he would take care of all the expenses for my visa processing and further education. Now, all I had to do was convince my parents and make them believe my fictional story about being selected at an American university with an 85 per cent fee waiver. Luckily, my acting skills worked.

Though I felt bad about lying and being a bad daughter, I couldn’t survive the long distance for even a day longer.

Finally, I left for the USA. I now believe in the saying “sabar ka phal meeta hota hai”. My sacrifice and the long wait bore fruit. I had butterflies when I saw him waiting for me at the airport, it was the same feeling I’d experienced when I met him for the first time. Actually, wait. It was better! It felt as if all the Christmases, New Years and birthdays that we missed were all being made up for. God had finally answered my prayers!

That day I realized that miracles and true love do exist.

We stayed together for two years. I got to experience all phases of a relationship - over the phone, through social media, long distance and live-in. After two long years, we managed to convince our parents and explained how happy, successful and compatible we were.

After a huge battle (the really big one with thousands of conditions, humiliation, etc.), where my sister fought for my love and me (she knew it was real though she was against it at first), our parents agreed and we won!

We got married, not once but twice in a Christian ceremony as well as a Hindu ceremony to celebrate our love.

We are happy together and I can't wait to grow old with him.