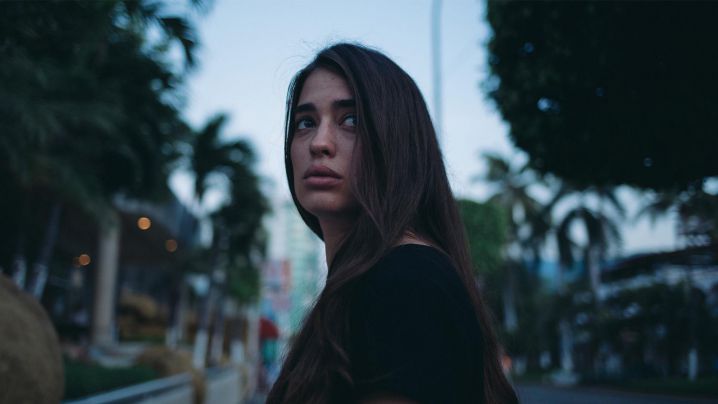 My name is Trisha and I am 18 years old. Actually, it’s my birthday today and I was missing my dad. He is in the military. And he surprised me by visiting us on my birthday. I was happy to see him but he had not brought any gifts for me. It’s okay because I was happy that at least he was here.

I had a great time in the evening with my mother, father and a younger brother. Then we went to our respective rooms to sleep.

Dad had returned after a year so we all had enjoyed with him.

With this memory, I was lying on my bed when suddenly the door of my room opens. It was my dad. I smiled seeing him. He came and sat on my bed. He put his hand on my forehead and started caressing it. He asked me about my studies and how I was doing it.

While talking, he kept his other hand on my stomach. I thought it was okay to do so as he was my dad and he can.

Since most of the time he stays away, we didn’t have much time to talk. We were somehow managing a conversation. And suddenly, he lifted up my t-shirt and started rubbing my naval. Was it normal? How stupid I was. Yes, it was. He was my father, he wouldn’t do anything wrong. He must have done that in my childhood too. But why wasn’t I feeling comfortable then? Maybe I was just overthinking.

His hands were moving up towards my rib cage and slowly down to the waistband to my lower. I got so uncomfortable that I abruptly stood up and he asked me what happened. I didn’t have an answer.

I just asked him to leave as I was too sleepy. And he left.

Next morning, I didn’t say anything to anyone because I thought it was all just bullshit building up in my head. I was overthinking everything. Two days passed by and everything was normal.

Everyone had gone to nani's house dad and I stayed back as I was having my period’s cramps.

The doorbell rang and my dad came home. But my mum and brother were nowhere to be seen. I asked about them to my father and he said that there were going to stay at nani's place for tonight. I started to go to my room when he stopped me and asked me to sit with him. I sat on the other sofa but he came and sat next to me.

He had taken my hands into his hands. That was as normal as it could be. Yes, it was a fatherly touch.

But I was wrong again. He started rubbing my thigh and so feeling uncomfortable, I asked him if he needed anything. To which he replied that he just wanted to talk to me. Then he said that my boobs became bigger than the last time he saw me. I was shocked. Maybe I had heard it all wrong. Maybe he meant that I had grown up since the last time he saw me.

I was struggling with my thoughts when he kissed my forehead. He slid to my eyes and cheeks and asked me to kiss him. It was normal to kiss fathers on the cheeks, so I did. Except, it wasn’t.

I was trying to relax and convince myself that nothing was happening wrong here and he just wanted to spend time with me. I shouldn’t overanalyse it.

But as I was thinking it, he held my neck and put his lips on mine. I was trying hard to push him but I couldn’t because he was too heavy for me to push. I used both my hand but he grabbed them, and I bit his lips hard out of anger. The blood started flowing and he backed off. But my body had become numb by then. I think he got angry then and so I tried to run away.

As I reached my room and tried to lock the door, he pushed the door away and I fell to the ground. He locked the room from inside and I pleaded him to leave me.

But he paid no heed to it. He asked me to take my clothes off and I kept asking him not to do it. I was throwing everything at him I could find but nothing stopped him. He grabbed me and pushed me on the bed. I tried my best to fight him but as soon as he unclothed me, I died.

Yes, I was breathing in there but my soul wasn’t. I was being raped by my own father.

I was lying helpless and he was violating each part of mine. And then he pushed himself inside me. Though my heart had stopped feeling but my body couldn’t resist the pain. I was crying out in pain and begging him to leave me. He still didn’t.

The monster whom I called my father was enjoying himself. I was broke and had no life in me left. When he got satisfied, he left me naked in my room bleeding.

It was 6 in the morning and I somehow managed to stand up.

I had put on clothes and was waiting for my mother. I heard the doorbell but didn’t come out of my room. Last night, the monster had come back to my room to warn me not to open my mouth and had redone my room properly. He had left no signs of what he had done. Not at least in my room. But I had many dents on my soul.

My mind still couldn’t accept what had happened. I was still wishing it all to be a nightmare. But it was a reality.

My mom came to my room and as soon as I saw her, my tears started to flow. I went to her and hugged her tight. She asked me what was wrong and ignoring the warnings, I told her everything. I was sure she would support me. She would help me to put that monster behind the bars.

But as I told her everything, my mom looked at me for a while and then slapped me hard on my face. She abused me badly for even thinking so. She believed that monster more than she believed me.

I don’t know why but no one believed me. They disowned me and now I am left alone in this world fighting each day.

Yes, I even tried to commit suicide but I was saved. I realised it later but now my eyes are open and I am determined to touch the sky with my ripped soul and will get that man behind the bars once I reach my goal.

It's very unfortunate to come across such incidents. She is a brave soul ready to fight for her justice. Share this story and let's give her some strength. Let's encourage her to take some immediate actions.